bohemianphilosophy has sent in this picture of a phone booth in Pockett Ave in Banks. The combination of strength and violence is a little disturbing. 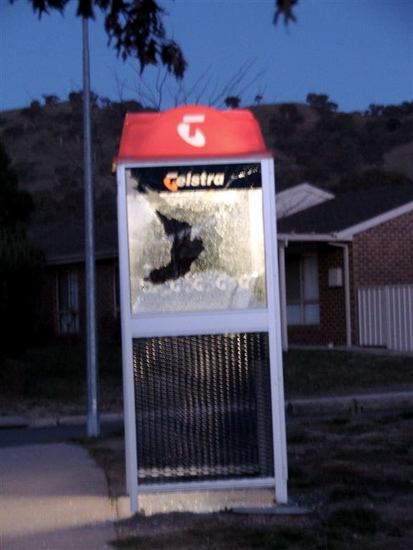 Got an image in, or of Canberra you want to share with the world? Email it to johnboy@the-riotact.com

At least they didn’t nick the light bulb; there’s responsibility for ya.

> I hope that the photographer wasnâ€™t the one throwing the rock!

I lived in a place in (Middle) Charnwood and I shit you not, there was a phone booth one day, sitting quietly as they do, and the next morning it was half way across the school oval!

maybe it was done with a Mythbusters frozen chicken cannon?

FB: It must be annoying to see that every other day. Well, I am. I know for sure that the booth will be the first destination if I need help and mine at home is not working.

Haha, I’m not sure if they are doing something funny there… but yeah, I’ve seen a lot of people using it too.

Bohemian, I have a phone booth right out the front of my place in the inner north & it gets the same treatment. It gets trashed every few months and Telstra come and fix it within a day or a two. It doesn’t have glass, it’s got Perspex but they still have to replace that regularly when it gets spray painted. I even came home one afternoon to find the whole thing completely ripped out and lying across my driveway. Telstra came out and had it up & running a few hours later.

I keep hoping that it doesn’t get repaired each time as there is a constant stream of bogans using it day & night. I often wonder if they are casing the joint.

telstra are funded under teh USO to provide public phone booths. However, they no longer manufacture them and have to reuse existing ones which are withdrawn from service due to lack of profitability or repeated vandalism.

under current regulations, anyone can install their own public phone, or start their own telco. if you cant get broadband in whoop whoop, start your own telco. See the bendigo community telco as an example.

i find it ironic that telstra are pilloried when its clear that the very community this phone services repeatedly destroy it.

when will this endless suckling at the governmental teat cease.

Thanks to Johnboy for posting this up.

Heh, Evictor, I won’t dig my own grave….

Yes, phone booth is rather rare these days and I think the one there is perhaps the only one (or two, not sure) along Pockett Ave.

Okay, the gist is, in the last couple of years that we’ve been here, this poor old phone booth went through a lot, from its cord being disconnected to being graffiti-ed and being charred by something (either fire or with some very very black and horrible substance). Telestra persisted and it was duly fixed everytime but within the space of a few months, it was being trashed again.

Thumper & Bulldog, yes, I have same question too. But I’m pretty impressed as the shattered glasses were removed and a new one was replaced the next day. For all the vandalism, they responded pretty quickly and it was fixed within a day or two. Oh the irony in comparison to other services ….

I’m wondering if other suburbs are facing similar problem …..

I hope that the photographer wasn’t the one throwing the rock!

I’m tipping an orange canon was responsible for the damage shown. At least it sonds more adventurous than a thrown rock…

Good point Thumper, I was thinking the same thing.

Will something like this get fixed after the sale of testra?

Somehow I doubt it…

Mind you, Dr Who has been known to enter the wrong Tardis – with catastrophic results.

…and getting rarer, from the look of it.

Public telephones are rare these days.

Through both sides with the same profile?

Not really. It’s safety glass like the same stuff used on the sde windows of a car. A rock pitched hard enough will do damage like this.

Wendy Kroon - 29 minutes ago
Karen Brown I wasn’t saying you were Karen previous comments by others were implying it. View
Karen Brown - 48 minutes ago
Wendy Kroon not saying that at all. But most (not all) public patients are seen in hospital clinics and a lot of those have b... View
Helen Goddard - 1 hour ago
Mark Bundy And when you can’t prosecute your case, resort to physical attacks. That’ll work ... every. single. Time. Get... View
News 32

James Dof - 1 hour ago
For me to catch a bus from Macquarie to Kingston it would be an hour and a half and an hour slower slower on the train than t... View
James Dof - 2 hours ago
For example south Canberra trying to get to the Kingston station is a nightmare View
James Dof - 2 hours ago
It depends on where you are, there is also the waiting between buses and the buses don't travel regularly to the Kingston tra... View
Sport 4

Sylvia Brooker - 4 hours ago
Thanks Leong kitchen, you will be missed by many. All the best for the future. View
Property 5

Robyne Mitchell - 6 hours ago
Meanwhile in Austria artist are getting 1000 Euros a month from the national government. As at 31 May = $1665.67. View
Lifestyle 8

Katie Tranter - 9 hours ago
We’ve had a pair visit a lot recently. So beautiful 😍 View
Elizabeth Ann Thurbon - 11 hours ago
What about in the home garden? Do they make a good display when grouped together in a mass planting?... View
Capital Retro - 23 hours ago
When I was younger I climbed to the top of Pidgeon House Mountain inland from Ulladulla and was amazed to find some Banksias... View
News 17

John Moulis - 18 hours ago
"Maintain the rage" Gough said on Tuesday. For three days they did. Then came an Aussie weekend at the beach in the sunshine... View
show more show less
*Results are based on activity within last 7 days

All work on the West Basin area should cease until a complete environmental and heritage assessment has been made, according to...
*Results are based on activity within last 7 days

It was labelled a white elephant early on, by a former Labor chief minister no less, but now the temporary...
Opinion 45

The ACT Government has called on Opposition police and emergency services spokesperson Guilia Jones to quit the portfolio after it...
News 32

All work on the West Basin area should cease until a complete environmental and heritage assessment has been made, according to...
Food & Wine 135

While many restaurants identify with their customers via websites and social media posts, the owners of Leong Kitchen know their customers...
Best of Canberra 45

@The_RiotACT @The_RiotACT
Have you seen 15-year-old Hayley McNally, who was last seen in Amaroo on Saturday night? https://t.co/n7vkkxaoHC (46 minutes ago)

@The_RiotACT @The_RiotACT
In this week’s RiotACT newsletter: which Target stores are closing? What’s the latest COVID news? Why are Braidwood’s historic trees set for the chop? Catch up here https://t.co/7vn958SSUV (1 hour ago)

@The_RiotACT @The_RiotACT
Commonwealth Avenue Bridge won't be falling down after all. The National Capital Authority has backed away from an idea to demolish the 60-year-old structure and replace it, preferring to strengthen and widen the bridge https://t.co/pHyF2cZXup (3 hours ago)