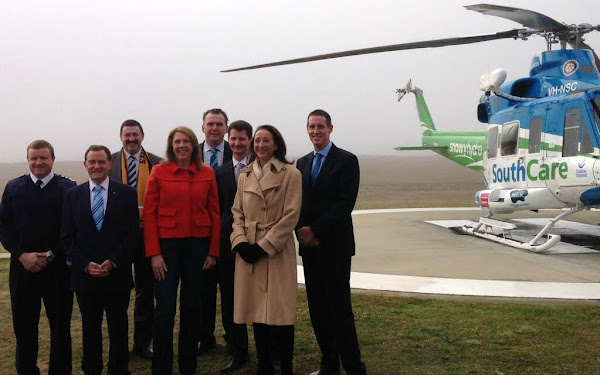 Catherine King, Gai Brodtmann, and Mike Kelly today all combined forces to announce a $500,000 federal grant to the Snowy Hydro SouthCare facility to aid them in providing emergency services.

Federal Member for Canberra Gai Brodtmann said the funding will provide for the construction of a training and administration centre next to the organisation’s current helicopter base in the ACT, allowing for the colocation of its operations base and helicopter pad.

“Combining the centre’s administrative and operational bases will deliver faster, more effective services to the ACT region and communities, as well as increase the capacity for public interaction with its famous helicopter. This is an important aspect of raising the organisation’s public profile and funding,” Ms Brodtmann said.

Snowy Hydro SouthCare is the primary Aero Medical and Rescue Helicopter service in the region and has completed more than 5000 missions since it was established in 1998.

UPDATE: Minister for Police and Emergency Services, Simon Corbell, has just welcomed the grant announced today. Why he wasn’t involved in the above announcement I don’t know. Kinda seems like it involves him doesn’t it? Still if he’s happy, then I’m happy.

“The grant from the Regional Development Australia Fund will go towards the construction of an administration and training centre near the existing base for the Snowy Hydro SouthCare Rescue Helicopter at Hume,” Mr Corbell said.

The new facility will cost around $1 million dollars to build. Snowy Hydro SouthCare’s operating company will cover the remainder of the cost by matching the $500,000 grant given to the fundraising committee.

“The Snowy Hydro SouthCare Rescue Helicopter operates around the clock and is currently tasked on an average of two missions a day,” he said.

Oliver Raymond - 1 hour ago
Charles Godworth It was another Seselja ambush. There was no need for the urgency. Not enough time to find a strong alternati... View
Natalie Gresham - 16 hours ago
🤬 the Liberals never learn do they. Let's just hope he gets voted out 😂😂😂 View
Christopher Goyne - 1 day ago
great news View
News 29

Ian Hubbard - 7 hours ago
Remember the Ainslie bowling club. Great place to catch up with old friends for a beer and a bowl. Now residential. Community... View
Leah Dwyer - 16 hours ago
Yeah, braddon oval as a dusty car park. Those were the days. View
Ian Hubbard - 17 hours ago
Change is not scary but managing a community activities centre that brings the Nth Ainslie community together requires active... View
Community 4

Ben Roberts - 9 hours ago
No Anita but Romy is keen to travel up for it. She'll do anything for a book bargain. View
Anita Godley - 16 hours ago
Ben Roberts are u moving back here? View
Ben Roberts - 18 hours ago
What dates next year for Northside? View
Business 3

Peter Tregear - 13 hours ago
Yes, it does say something about the current government's national priorities, but it also says something about the Universit... View
Rauny Worm - 17 hours ago
There will sadly be a negative flow-on effect for the entire creative sector , and not just in Canberra. View
Opinion 14

@The_RiotACT @The_RiotACT
CBR singer-songwriter Hedy Blaazer celebrates the release of her first studio EP this week. All the details of her show & plenty of others are in our latest #GigGuide https://t.co/qFsua3pban (2 hours ago)

@The_RiotACT @The_RiotACT
After months of work by crafters worldwide, the Remake Christmas project is set to send more than 100 decorations to Cobargo and Quaama https://t.co/Fbnf4wE4rD (3 hours ago)

@The_RiotACT @The_RiotACT
Hot in the City: The Merchant’s Feast delivers a deli directly to your door https://t.co/ARj4mTkr7u (4 hours ago)