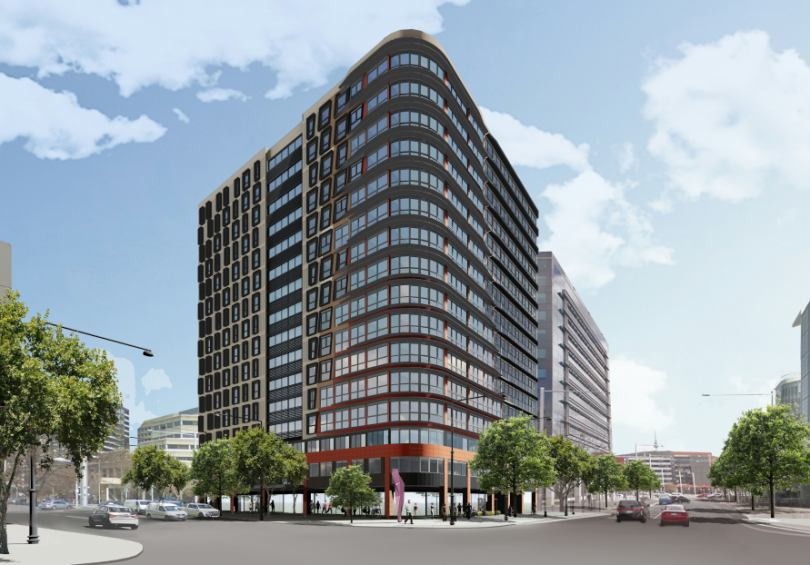 The proposed student accommodation building on the corner of Moore and Rudd streets in Civic. Image: Antoniades Architects.

An already approved 16-storey residential building in the city near the Australian National University that was going to be the first build-to-rent development in the ACT will now operate on a student accommodation only model under new management.

An amended development application has been lodged by Canberra Town Planning for the WH Moore Trust, set up by Singapore-based developer Wee Hur, which operates several purpose-built student housing complexes near Australian universities.

It was pitched at professionals and the international student market, but offered little parking with the expectation that residents would walk or ride a bike.

The change to a student-only model comes despite the disruption from the coronavirus pandemic on the international student market, particularly those from China.

While the One City Hill project in Civic West succumbed to the impact of COVID-19 on the student market, this project and another one proposed in Braddon appear to retain confidence in the sector’s long-term strength.

The proponent wants to greatly increase the number of units and beds, reconfigure the internal design to consolidate communal space, including removal of a rooftop area for safety reasons, and adjust the facade and balconies.

The building will now have 674 mainly single or twin-bed rooms, increasing the total number of beds from 602 to 733.

The previously separate amenities will be consolidated and additional communal areas created throughout the levels of the building, including a bigger space at Level 1 for a central meeting place for residents and the building occupants.

The DA says the revised communal spaces provide greater diversity and will be available to all residents compared to being previously segregated.

While the area of the space has decreased overall, the amenity for residents is considered to be comparable, it says.

Relocation of the substation and changes to waste management requirements since the original DA have resulted in changes to the basement layout, but the number of car parking spaces remains unchanged, although that was only seven, five of which will be used for a car-share scheme, and two for staff parking, as well as seven motor cycle parking spaces.

The number of bicycle spaces will almost triple to 300, from the original 110. The traffic report says this style of development in a city centre location typically attracts international students who do not own a car, so the building’s increased number of beds should not require more parking spaces.

A decrease in the number of commercial tenancies will also mean fewer service vehicles for deliveries.

The student accommodation model will be similar to build-to-rent. The original DA says residents will enter into an occupancy agreement with an accommodation provider rather than a residential lease with a landlord or property agent. The development will include an onsite team to manage leasing, day to day tenancy issues, building maintenance and management, and other services.

The site is home to a four-storey building that will need to be demolished.

Smackbang - 38 minutes ago
How about you stop passing judgement on someone you know precisely nothing about? View
Opinion 86

Ian McLeod - 8 hours ago
Jeff Smith I see your point but I don't think planners expected the Brindabellas to become such a valuable resource for menta... View
Jeff Smith - 8 hours ago
I used to hold the same views, but then I realised that Not building across the river is just an artificial barrier. CMAG has... View
Ian McLeod - 12 hours ago
We absolutely should not build across the river right up to the Brindabellas either as certain politicians have been pushing... View
Property 15

assiduous - 9 hours ago
Low lending standards and inflated bonuses for originating mortgages based on ever rising values are core features of our ban... View
Pradeep Bishwakarma - 9 hours ago
Crazy market Shiva Sapkota! Only the RBA Can fix this View
Rebekkah Patton - 11 hours ago
Jamie Patton the price 😱 View
Community 13

Julie Macklin - 18 hours ago
I cycled and rarely had to face the parking problems people complained about. When it rained I took the bus, even though I ha... View
Maya123 - 18 hours ago
We had flexitime and we had clocks, do there was no way someone could cheat on their hours. Whether the individual actually w... View
Julian Hayes - 18 hours ago
Because I've seen the truth employers simply make their employee's work a 12 hour shift as its still within not having to pay... View
Opinion 1

ChrisinTurner - 18 hours ago
When did the Stanhope plan expect this expansion to be finished? 5 years ago? View
News 12

chewy14 - 22 hours ago
I think it's unfair that people who work more years than I do, in jobs that pay more than mine does, end up having more money... View
show more show less
*Results are based on activity within last 7 days

@The_RiotACT @The_RiotACT
Fancy a home with a 'holier than thou' atmosphere and traditional Victorian features? The Convent might be just what you're after https://t.co/AYQBE6Ww6Q (14 minutes ago)