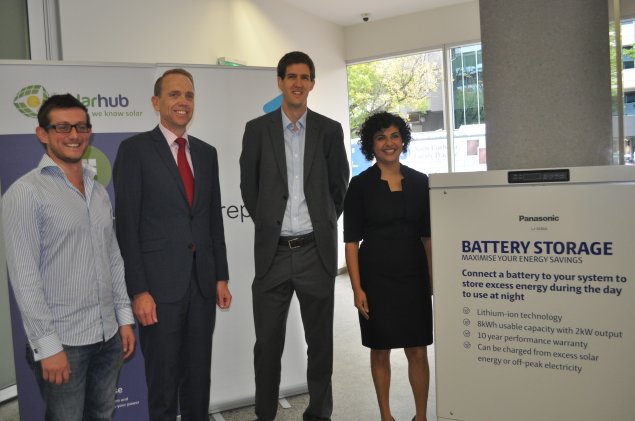 A total of 17 proposals have been received in the Next Generation energy storage auction that will lead to up to $2 million being allocated to five companies to install solar storage in Canberra.

The deadline for proposals closed last Wednesday and the successful companies will be announced after proponent capability, product and delivery risks and local investment benefits are assessed.

The bids propose to install more than 8MW of storage and were received from a range of local and national businesses, many with strong international partnerships.

Environment and climate change minister Simon Corbell said on Monday that spreading the grants across a number of providers would encourage competition, innovation and support for a range of technologies.

“This grant round is expected to support the roll-out of more than 2MW of energy storage across more than 600 Canberra homes and businesses,” he said.

“It was a requirement of this grant round that interested companies only use energy storage systems that are capable of responding to changes in energy markets in order to maximise the value for consumers and the electricity network.

“In addition, proponents were required to provide a minimum 10-year product warranty period for the installed batteries and establish an office in Canberra for local sales and support.”

Corbell said the ACT government had targeted solar battery storage in its plans to reduce emissions, grow the renewable energy industry in the ACT, and position Canberra as an internationally recognised centre for renewable energy.

All fabulous questions that my Grandkids ask too (sort of). I make them use books n stuff from the library. Oh yes, they complain about having to find stuff out for themselves but how else will they actually learn?

8 MW is about 50 cars. Why not just spend the money on electric car subsidies

Is the cost of this new storage infrastructure to be added to all our electricity bills by ACTEWAGL or is it already included in the electricity price rises announced by the ACT Gov’t because of the solar farms ????

Both. But with every ‘upgrade’ you’ll only get one figure an announcement of how good we all are.

We could just invest in sources that produce 24×7.

Is the cost of this new storage infrastructure to be added to all our electricity bills by ACTEWAGL or is it already included in the electricity price rises announced by the ACT Gov’t because of the solar farms ????

The entire concept of energy storage relies on one important factor, that we have excess energy to spare. If we have so much solar and wind power right now that we can “bank” some of it for later use, why haven’t the coal fired power stations shut themselves down? By storing coal powered, non-renewable energy we have gained absolutely nothing. In actual fact we have made losses in the process as no storage is 100% efficient. So without lowering coal output to practically nothing, how is storage going to benefit us in the present? Wind and solar power will be entirely used up during their production cycles as they merely take load off the big power stations.
Unless there is some sort of commitment to reduce coal fired power output that equates to the amount being generated by renewables, storage is purely adding another cost to our electricity prices by forcing up the cost of both coal and stored green energy.

Bethany Williams - 1 hour ago
Rainer Busacker I TOTALLY agree with you! It’s eyeball spam on the side of the roads and looks tacky - especially when they... View
Rainer Busacker - 2 hours ago
Bethany Williams good on you. Nothing against anyone having a go and wanting to make a difference. I just think that there is... View
News 9

Daniel Duncan - 2 hours ago
Another reason to vote Barr and his crony's out. View
Rainer Busacker - 3 hours ago
Steve Wood "Gunna-Do-Barr" sprooks a lot of things, especially now just before an election. When and if ever will he actually... View
Opinion 31

George Watling - 4 hours ago
Yes lets have more $1.9 billion spends on Trams and bad urban infill stuffing up the city. View
Mark Chapman - 9 hours ago
Who believes a word that these Tony Abbott wannabes say? View
Stephen Page-Murray - 9 hours ago
Just noticed a Liberal corflute. Lower taxes, better services. Now most intelligent people know it can be one or the other, n... View
News 1

Shane Westmore - 6 hours ago
TfNSW has never had a desire to run this service for whatever reason... i would once every month or two travel between Sydney... View
Business 8

Ashley Wright - 15 hours ago
Evan Hawke that’s what happens when you are a new area and you get (most) of that stuff during construction. You mention th... View
show more show less
*Results are based on activity within last 7 days

The first week of the election campaign proper has come and gone, and one thing is clear - no one...
News 82

If there is one thing that Canberrans love, it's a good planning stoush. And in a town full of public...
ACT Election 28

Roadside corflutes, bulging letterboxes and a flood of Facebook posts can only mean one thing - it's election time. The...
News 42

The ACT Government has announced tough new measures to stop horses entering Namadgi National Park as part of its 2020...
News 23