The Food and Dance Spectacular for 2007 took place yesterday and while it remains one of my favourite days on the Canberra calendar there are increasing signs the event’s character is changing in unwelcome ways. More and more groups of white anglo folks are slapping on an orange ribbon and claiming the crowds are vindicating their own narrow agenda when really the crowds are there for the food, the fun, and the beers.

As but one example, here are the Resistance types flogging Che Guevara shirts and copies of Watermelon Weekly. 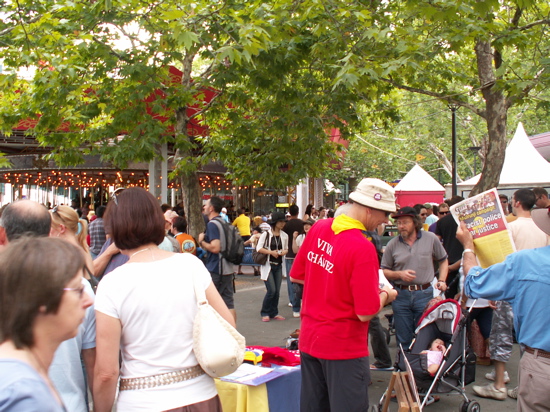 Which isn’t to say you can’t still get beer.

Zwiecz from the While Eagle Polish Club was a good start.

I’ll just take a moment now to put in GuruJ’s take on the day which he submitted as a story:

Went to the Multicultural Festival today despite expecting to get thoroughly rained upon, and had a great time.

They’ve closed off the section of London Circuit at the Canberra Theatre/Legislative Assembly intersection, and I think it has helped make the festival feel both larger and less cramped.

Loved the food (everyone should try Ä†evapÄiÄ‡i at least once in their lives), and I recommend the Å»ywiec (Polish) beer!

Oh, and to see how lucky the Festival has been not to get rained out, just have a look at this snapshot from the Bureau of Meteorology.

Back to the RiotACT team, we were lucky enough to see that rarest of things, dancers who were of a different cultural background to our own, and who were not belly dancing! 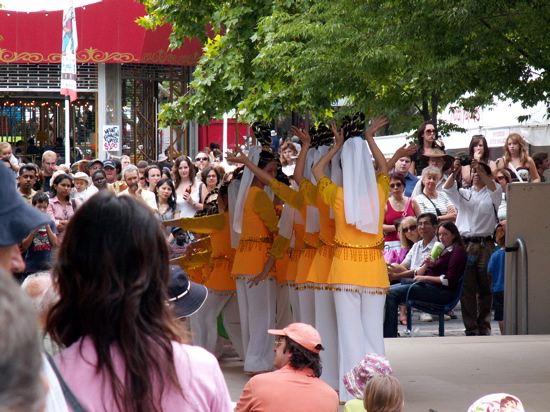 A Phillipino tent provided meat on a stick and all was well in the world. 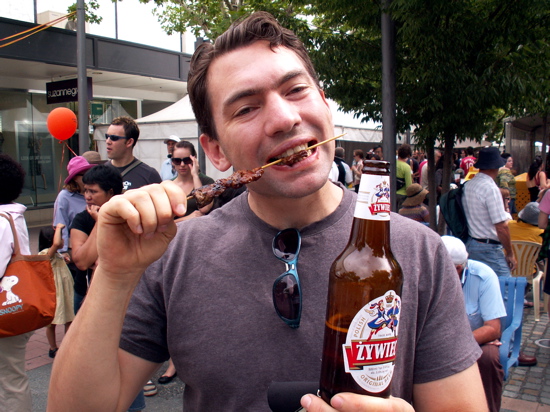 The Belgians were magnificently true to type with an astonishingly complex bureaucratic process involved to get a beer (in a plastic glass even if it came in a perfectly good bottle like everyone else was selling). Furthermore they didn’t actually have any of the promised gourmet sausages. 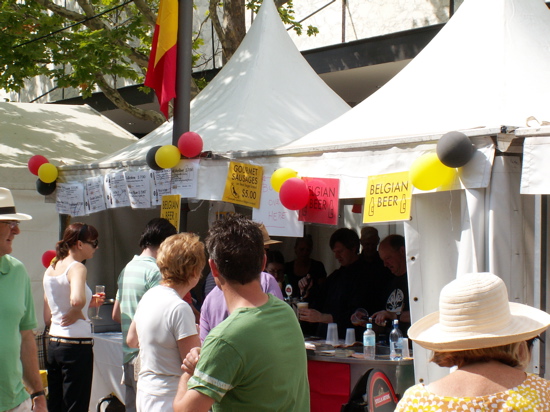 The Golden Carolus we drank did, however, knock our socks off at 8.5% alcohol.

The African Australian Association had a great stand running with their own entertainment, merchandise, interesting food, and beer from Namibia. 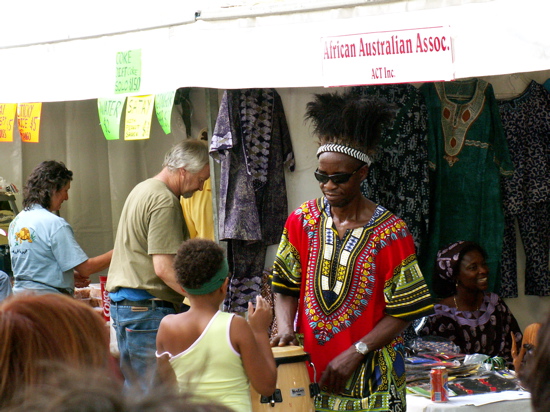 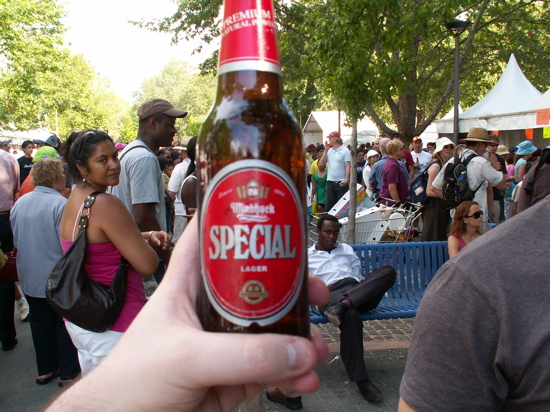 The best stuff was on late at night. 11:30pm Sat night “Oka” hit the Fringe stage. We’d just finished packing up another stage nearby when they came on and the sound dragged me across the street and held me there until they finished around 1:30am. Fantastic!

Gave the festival the big miss this year after last year’s either Ethiopian or Russian fare saw me hospitalised with Giardia poisoning…
Most unpleasant – both the poisoning AND the hospital.

Savannah Is a tasty cider, drink of choice while over there, except for fosters which was a breakfast beer

There was plenty of time yesterady for th organisations, no need to put them in with the great food on saturday!

And the bloke wearing the Chavez shirt was selling the Che shirts.

What a surprise to see the left out supporting their latest dictator de jour.

his wife pointed out that i use this festival as an excuse to get drunk on as many different foreign beers as possible.

Is there a difference?

Johnboy, you’re overreacting to the European Commission/Union stuff. It was really just harmless tourist info, and my girlfriend and I found it quite helpful as we’re going over in August.

Plus the best food of the day were the souvlakis at the greek tent in the corner near the Theatre, and the best drink was the Tongan mystical fruit punch of the Gods.

travelling in Russia I was really impressed with a blood red real ale they served at room temperature, never came across anything like it before or since.

but most russians do prefer the hard stuff

yeah the russian beer is called baltika or something similar and they have a few different styles, i noticed it last time i was in there, i havent had it yet tho, so let me know if it is any good.

Russian beer?? Is there really such a beast? I thought it was all pretty much vodka with a J&B for a bit of variety.

If you guys are after more russian and polish beer they sell them at dan murphys in tuggeranong, pretty cheap too. they also sell the belgian one as well.

I got there at 10am: Plenty of parking: No crowds: Still fairly cool. Time enough to get my yearly supplies from the Russian tent. Most were selling food and some were already selling beers.

Geez that belly dancer on the right is preggos.

Congrats to the organisers….this year’s festival was really well organised and set up. I particularly like how the stalls were spread out this year and that more of City Walk and Ainslie Ave/Civic Square was utilised. The stages were also better placed.

And a sobering thoughtâ€¦.just about every dollar spent at the Labor Clubs Inc ends up in Stanhopeâ€™s electoral coffers.

Jaffa Groube - 6 minutes ago
It shows the rest of Australia that Canberra is not just politicians and public servants but ordinary folk like themselves. View
Kris Peralta - 20 minutes ago
It's not the event, it's just some of the grubs that it attracts. I think a half decent track and drag strip would be better... View
Rachel Bambi Taylor - 28 minutes ago
Tharren Kingston-Lee I’m not really getting into it that way, just mean that I think that’s what he is referring to View
News 188

Sharon Cvetanoski - 6 minutes ago
Absolutely not. View
Garry Dodds - 40 minutes ago
Doesn't matter what you say here the Government is still planting Gums in the Suburbs. View
Jenny McInnes - 1 hour ago
Karen Feng we definitely need more trees and native ones are clearly a good option. I love citrus trees for their lovely foli... View
Motoring 62

Richard Young - 55 minutes ago
Warren Darren Colin Brad Petrol news👍... View
Richard Young - 56 minutes ago
Solid gold mopeds. Why is that so funny???? View
Craig Parker - 3 hours ago
Steve Chisholm - yep, I agree. Even a slightly smaller Summernats is still a kick-arse event. The fact that it went ahead tru... View
News 61

psycho - 1 hour ago
“A lot of the time, the most common difficulties are ones that everyone faces,” she said. This is absolutely the case. Ap... View
Opinion 139

Barbara Biddle - 2 hours ago
Peter Montgomery yep so when the track is closed down the developers get a hold of it. All profit based … View
John Evans - 2 hours ago
Well if the ACT is denied a drag-strip due to noise then why not ban the raceway? Got to be consistent. View
Sandie Ann Johnston - 3 hours ago
God we are never allowed to have any fun in life. So not fair !!!!! View
News 40

Capital Retro - 3 hours ago
The smell at MLRMC where it ends up has certainly increased. View
Ocumus Prime - 7 hours ago
There is no way 30% of my homes garbage is food waste (we compost). I am all for trials but also curious if they are trialing... View
Property 1

I know it’s a generalisation, but many Canberra residents appear to have an uncomfortable relationship with anything to do with...
News 188

@the_riotact @The_RiotACT
#ActewAGL House in Civic has been sold to #CharterHall for $76 million, as the investment group continues to build its #Canberra portfolio https://t.co/RCwY27x7u4 (31 minutes ago)

@the_riotact @The_RiotACT
It’s not just the smell of sawdust and freshly chiseled wood shavings that stir the passion of #Goulburn Region #Woodworkers' members – a sense of community spirit and belonging also plays its part, writes John Thistleton https://t.co/ytL1Mf3KrU (5 hours ago)