Under Age House Party at The Street 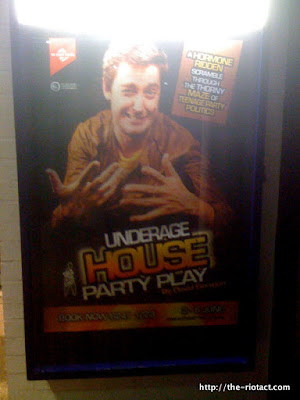 A one man show is the theatrical equivalent of climbing Everest. And there is nothing in the world of theatre quite like the moment when that one man comes out on to the stage.

From start to finish he stands alone in front of the audience without cease or respite.

Writer (and occasional RiotACT commenter) David Finnigan’s new play opened at The Street Theatre tonight and I was lucky enough to attend the sold out opening.

I’d had a lot of reservations. Who really wants to see another coming of age / high school thing? I mean we keep going to them but when are we all going to grow up?

On the other hand the talent deployed for this show made me think it was worth checking out.

And I wasn’t disappointed. It was so good that my companion for the night is planning to head back and see it again.

Teenage drama is endlessly popular because pretty much the whole of the market has been a teenager once.

Underage House Party is 45 minutes of David Finnigan’s observational genius channeled through actor Matt Kelly’s ability to switch through a range of characters and narration.

The fun of the production is recognising our own regrettable (and yet unforgettable) pasts in the characters.

Combined with the whip smart dialogue one would expect from Finnigan and we’re on to a winner.

For $20 a ticket it’s a great start to a night out in Civic from here to Sunday.