Rock Group gets an electric car 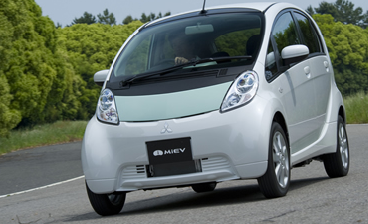 Canberra’s Rock Development Group have proudly announced that they’re going to be one of the first businesses in Australia to operate one of Mistubishi’s I-Miev electric cars:

The forward thinking ACT development group was one of 100 businesses and government departments to apply for the highly anticipated leasing arrangement and will receive the keys to its i-MiEV fleet vehicle when it arrives in Australia later this month.

Maria Efkarpidis, a Director of the Rock Development Group said she is excited about the pending arrival of the i-MiEV.

“We are delighted to be selected by Mitsubishi to receive one of the first i-MiEVs in the country. We are passionate about environmental sustainability and believe electric vehicles are the way forward.”

Ms Efkarpidis said the arrival of electric vehicles in Canberra is an important step for the city and hopes to show Canberrans the vehicle is a viable and stylish mode of transport.

“Electric vehicles are part of our overall vision for a greener Canberra. We would love to see the widespread adoption of electric vehicles and we will be working in cooperation with Better
Place Australia to make this happen with an upcoming trial in the ACT.”

So there we go, the future to arrive shortly.

Batteries don’t (although the technology is getting better all the time) but the power from the batteries on any even vaguely modern device is regulated so that the device gets constant voltage and current until the batteries get too flat then *bing* it stops.

I doubt it, maybe the disposable AAs in your tape player or the NiMH batteries in your power drill do that, but lithium ion batteries don’t.

The screen on your mobile phone doesn’t get duller as the battery runs down, it just dies at once.

$70k sounds like a bit of a hurdle to adoption. As for 160km being a range issue, I don’t think they are designed to do long distances, but plugged in every second or third night would mean never needing a recharge around town.

As for speed, they will have max torque avail all the time, so acceleration will actually be pretty good, top speed is 130km/h so you’d be fine around town

I believe they are good for around 160 km’s, then need a 7 hour recharge. So on a trip to Melbourne I would get to Yass,before an o’night stop, then Gundagai, another o’niter. and so on .So all up a little over a week to get to the MCG. Now thats progress. Cobb and Co were quicker.

How do you develop rocks? Do you need a special darkroom?

… and maybe sixteen squillion years. but lemme tell ya, cross processing is a bitch.

Cool. What does one of these i-MiEVs cost?

George . . . my mail has them at around the $70,000-00 mark. That doesn’t include the modifcations you’ll need to make to the wiring in your garage so that you can charge it while running a microwave as well (and without plunging the house into darkness).

How do you develop rocks? Do you need a special darkroom?

Rock Group gets an electric car

That’s not very rock and roll. I assume this rock group plays EMO?

“believe electric vehicles are the way forward”… albeit slowly.

Cool. What does one of these i-MiEVs cost?

Spencer Hunter - 6 hours ago
Matt Wecker boys could be on here View
Sarah Watt - 7 hours ago
Anthony Billy Watt I’m sure you’re across this... View
Larissa Hutchens - 8 hours ago
Marshall Amelia they definitely would. Tim could take them 😝 View
News 29

Lloyd Woodward - 6 hours ago
Stop with this boomer thing. Im apparently a Boomer, but think this is a great idea. He is just a sad Panda.... View
Robert Azzopardi - 13 hours ago
I think it strange that comments here suggest that scooters and their riders are the problem but not cars and their drivers.... View
Property 20

Rob Thomas - 9 hours ago
Kir not only that I have my own oxygen tank and mask. I've be arguing for a further discount as I'm not using the buildings a... View
Kir Rin - 10 hours ago
Rob Thomas do you potentially pay for other things that others may not? Do you have a separate entry? View
HiddenDragon - 10 hours ago
Another great thing about electric vehicles is that they're exempt from those old-fashioned rules about parking between the y... View
News 21

Sue Jameson - 9 hours ago
That’s a job!!! View
Lesa Hallissy - 11 hours ago
It needs all the help it can get View
Sport 9

Pat Murray - 12 hours ago
Outta my Weyman! View
James Guy - 13 hours ago
Great photo View
Catherine Hulse - 14 hours ago
Good on you mate! You did for our town! View
Opinion 48

Rosemary Braiuka - 13 hours ago
You DO realise you are misinformed don’t you? View
Business 1

Luke Malacchi - 14 hours ago
Bill Caddey....prime for a bloke with a railbike View
News 2

A government speed detection van on Canberra Avenue has been shot at in an apparent drive-by attack, police said. An...
News 29

Former Liberal Chief Minister Kate Carnell, who formed government in 1995 and again in 1998, says that it's time for...
News 29

@The_RiotACT @The_RiotACT
After a huge week in ACT politics, our newsletter wraps up the topics that had readers talking https://t.co/bozjQLVeve (6 hours ago)

@The_RiotACT @The_RiotACT
Josh Tonna may have lost his world title fight but he's walked more than 330 km in quarantine in his hotel room raising money for Lifeline https://t.co/iEaIwTzinO (8 hours ago)

@The_RiotACT @The_RiotACT
How would you like to own a home that’s more like a 5-star country resort? This Murrumbateman property is the perfect place to snuggle up, wind down & rest up https://t.co/0D5XD98NSv (9 hours ago)