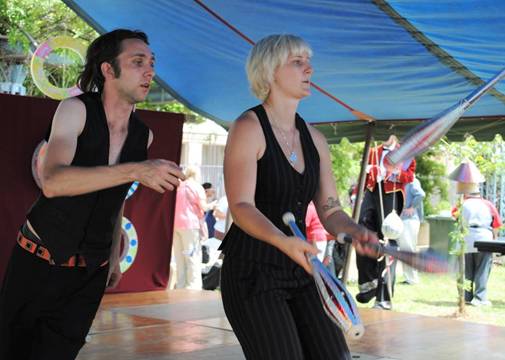 On October 21 and 22, Canberra will welcome the acrobats, jugglers, handbalancers and hoopers to the Belconnen Community Theatre stage.

A brand new show, touring internationally in 2012, will be premiering in Canberra. Circus acts by some of Australia’s most talented circus artists, presented with a uniquely Aussie sense of humour. Described as a miniature Circus Oz show, with big spectacle acts and comic moments, 3 Skirts & A Mustache was actually supported in it’s early development by Circus Oz.

This show was created by the producer of The Blue Marquessa, Le Petite Sideshow and Schmick As Presents. “Creating a show that is just as much for a group of adults as it is for families has been a challenge, but I think we’ve come up with something really great.” says producer/performer Elena Kirschbaum. “It’s silly and light hearted but with genuine spectacle, I do believe it’s got ‘something for everyone’.”

The show runs at the Belconnen Community Theatre at 8pm 21st and 22nd October, tickets are $15, $45 family, available for purchase at the door.

Jake Winters - 2 hours ago
Ana Martinez enjoy mother x View
Nicole Thomson - 6 hours ago
Becky Cormack if it’s In a format for a random person to engage with (which it Isn’t) Plus schools are indicating it will... View
Natalee Gersbach - 7 hours ago
If only we had NBN, working from home and kids schooling from home might not be such a huge issue. Almost our entire suburb h... View
Food & Wine 3

OldMan Wyatt - 5 hours ago
I have always preferred chocolate rather than seafood at Easter View
FishCo Fish Market - 7 hours ago
Thank you for your lovely feedback. Anna truly loves what she does and this will mean a lot to her. :)... View
Michelle Littlewood - 10 hours ago
FishCo Fish Market Thank you for your fantastic service and exceptional seafood. Anna was wonderful when placing my order, an... View
News 32

jima - 17 hours ago
Could have told you this sort of thing would happen when it was sold 20yrs ago. Privatisation at its best. View
News 16

Paul Dowden - 17 hours ago
Laurence Kain I was there. View
show more show less
*Results are based on activity within last 7 days

@The_RiotACT @The_RiotACT
With empty shelves, panic buying and stressed customers, how are Canberra’s supermarket workers coping with the COVID-19 crisis? https://t.co/cf17uw7t3t (4 hours ago)