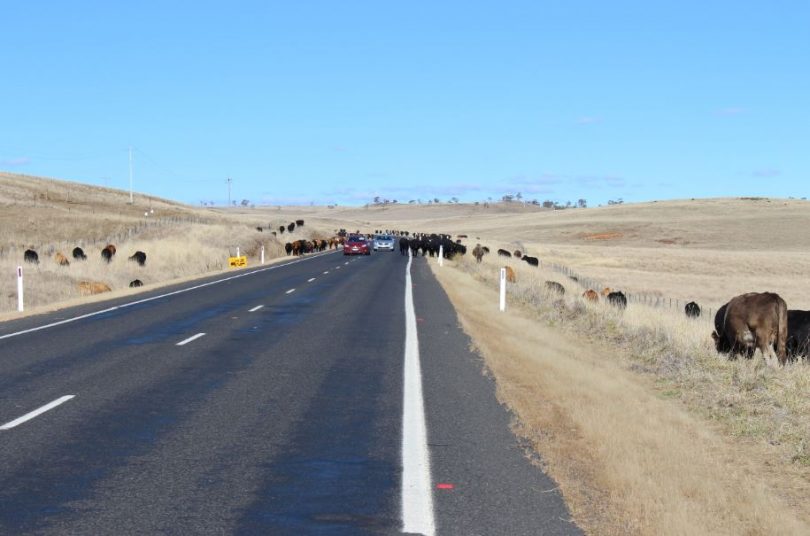 Dry times in South East NSW is pushing local farmers beyond their own farm gate and out on to the “long paddock” offered by the Monaro Highway.

Motorists need to take care as 500 cattle munch and chew their way along the roadside, grazing on grass and nutrients their home paddocks have lost as the region moves towards drought.

The cattle, which all look to be in good condition, come from properties at Nimmitabel, Bombala, Adaminaby and Tumut, and are on their way to Adaminaby via the Cooma – Maffra Road once they leave the highway.

Half of the herd completed a similar trek late last year, but as the dry times bite, they are back. 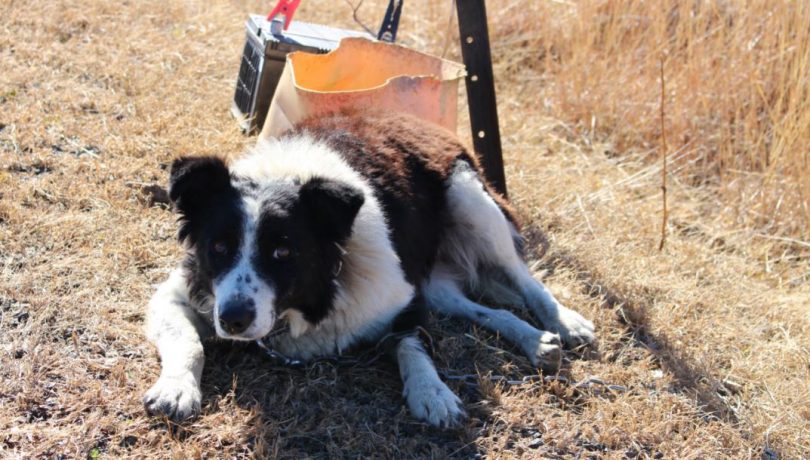 Twelve cattle dogs and two drovers, one of horse keep the cattle moving.

The journey will take these brown, black, and brindle beasts, their two drovers, and 12 cattle dogs two months to complete.

“It’s not the direct way to go but there is a lot of good feed along the way,” drover Jennifer Collis says.

“They would walk up 20 to 30km a day, stopping at a Travelling Stock Reserve roughly every 10k’s.”

Travelling Stock Reserves (TSRs) are a throwback to Australia’s pioneering days and were set aside over 150 years ago for the movement of livestock from farms to markets or railheads.

There are more than 6,500 TSRs on Crown Land in NSW, covering approximately two million hectares.

Over time, the use of TSRs has changed; during drought, they become a fallback option for grazing cattle, hence the name, “long paddock.”

“It’s cheaper than buying feed in and it keeps vegetation on the side of the road down.” 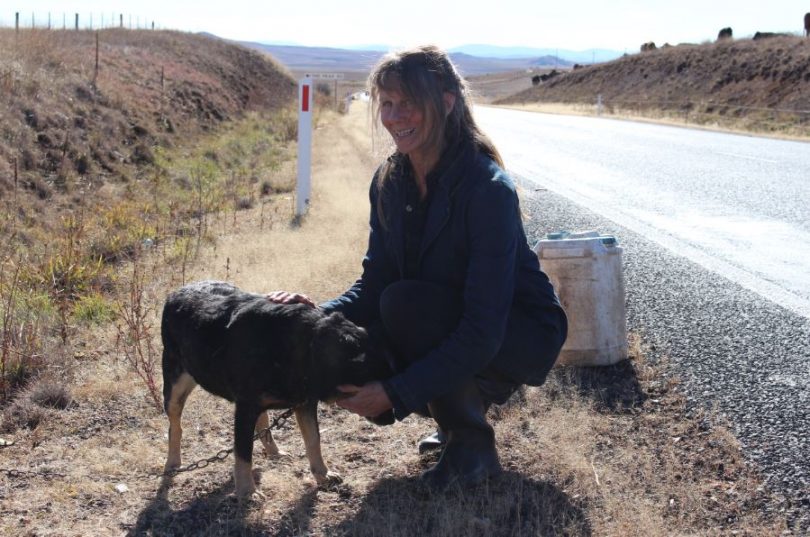 Bombala’s Jennifer Collis says she loves being in the great outdoors.

Ms Collis picks up rubbish along the way and is keen for motorists to show more respect for the environment and the people who work in these roadside spaces.

“I’ve lost count of the boot loads I’ve collected, this is such a beautiful place, but sadly some of the cattle are limping because of broken glass,” she says.

The day I struck them, the herd was just west of Nimmitabel. Drover Mark Fraser was on horseback pushing them forward towards Ms Collis and a simple roadside holding pen boarded by electrified tape. A huge water trough attached to a tanker truck offering a pick-me-up along the way.

“I worry about them at night time cause the clutter of the trucks is just constant, but the cattle don’t get disturbed by the noise or the lights, it’s amazing.” 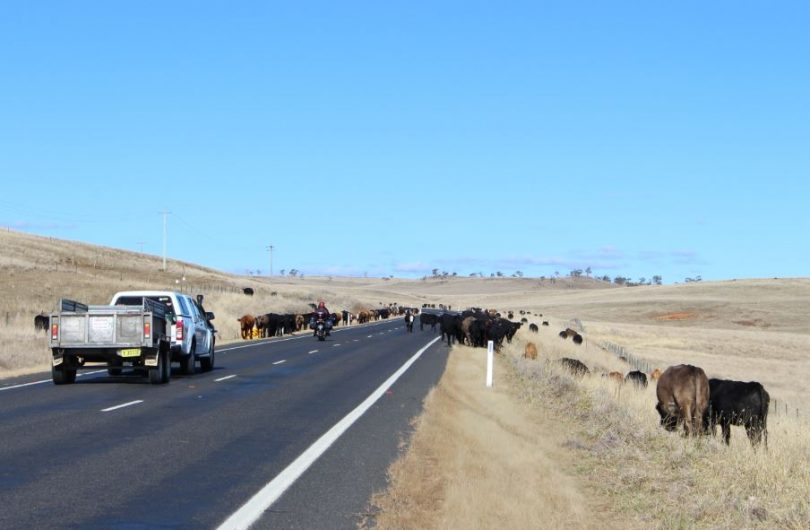 Generally, the mix of cattle and cars works.

Warning signs either side of the herd alert motorist to the oncoming danger, a system that Ms Collis says generally works; however, she says she won’t hesitate to walk on the road to slow traffic down.

The cattle have total disregard for the traffic, walking down the double white lines at times or curling up for a rest on the very edge of the bitumen until they are moved along.

There is something nice about getting stuck in this spectacle and having to weave your way through these big faces with the cooperation of other travellers. 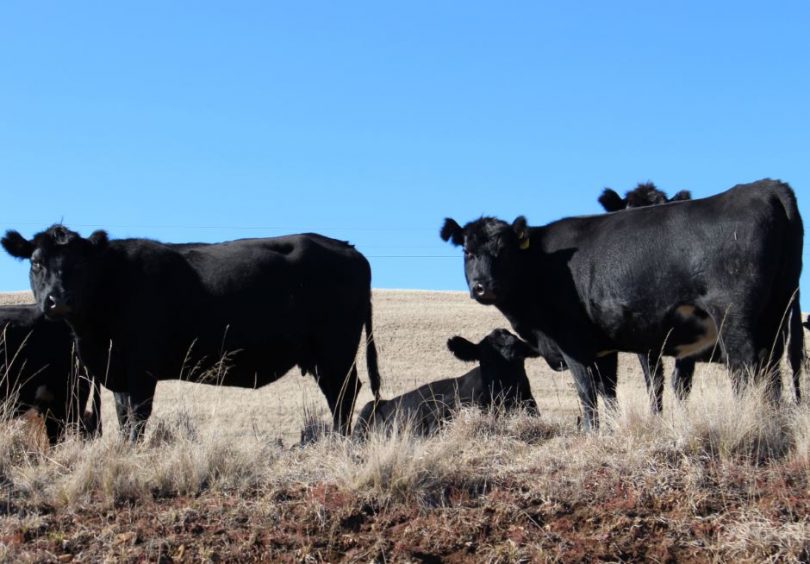 The cattle appear to be in good condition making the most of there time in the “Long Paddock.”

The 12 cattle dogs that keep watch are well looked after with fresh meat and bones at the end of every day, while Ms Collis and Mr Fraser retreat to a roadside caravan.

A qualified hairdresser and mum of three, Ms Collis says she enjoys the work.

“Mark and I are very compatible, and I love the fresh air and great outdoors, and the old ways.”

“I miss having a horse myself so this is the next best thing,” she says.

Drovers are also working the long paddock near Bombala at the moment with stock from Delegate headed towards Ando and then Berridale.

“It’s getting worse, farmers have just about depleted their feed,” Ms Collis says.

When it comes to being “officially” drought declared, South East NSW is edging closer.

The NSW Department of Primary Industries on Tuesday (May 22) had most of the region on its “drought watch” list, however, southern parts of the Bega Valley, northern parts of Snowy Monaro, and north-western parts of the Eurobodalla has been declared in drought or drought onset. 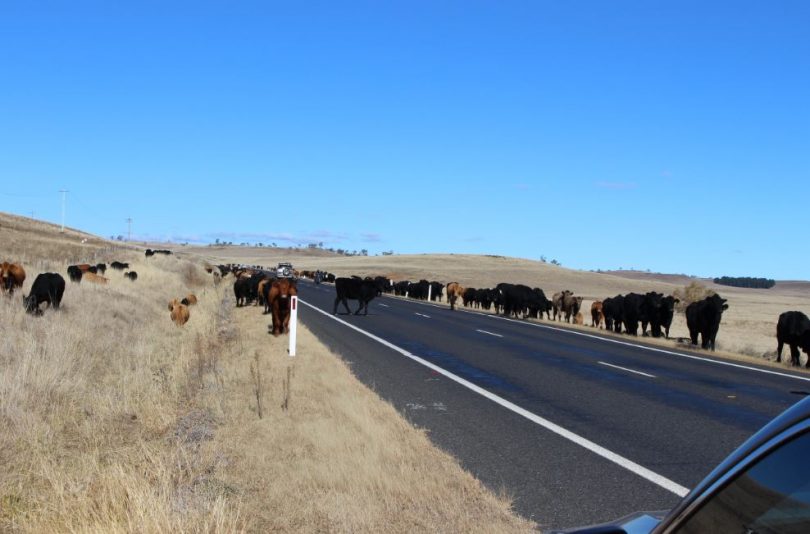 Slow down! Warning signs either side of the heard worn motorists.

Yep, went through them on Friday last week. Two trusty dogs on guard and the farmers Ute.

Seriously! Why do the animals have to be off the road? Isn’t this how Australia survived for ever?

Yep send the animals to the dirt paddocks to starve and send the slashers out to prevent the fire danger at tax payers cost! But don’t make people slow down, in the middle of no where! 🤬

Drovers have been given 7 days to get them off the roads and back to where they came from.

Paul Pincini I remember you telling me about the long paddock

A old tradition pleasingly resurfacing in times of desperation. Drove this route twice last week and enjoyed every slow moment passing through their midst. 😀

Passed them last week, poor buggers don’t have much to eat. Slow down please.

I did a blog post on this very thing. @ www.Suth2.wordpress.com

I came across cattle drove on the weekend the other side of Yass! So terribly dry! Also lots of kangaroos at sides of roads so be careful!

Beautiful story Ian. It feels like it comes from a distant time which we still need to slow down and appreciate.

Thanks Glynis - couldn't agree more, being forced to slow down, I know I need a bit of that! Happy Friday.

Michael Strand - 13 minutes ago
Margy Duke I should add, you are clearly the person these proposed laws are aimed at.... View
James Hutchison - 17 minutes ago
Allan Pryor yep! Canberra is probably one of the best cities for bike paths and we still have this issue. The bike riders don... View
Allan Pryor - 25 minutes ago
James Hutchison that a lotvof infrastructure for people who wont use it View
Lifestyle 14

Valerie Foster - 26 minutes ago
Been talking about that for years. View
Property 8

Inca Serrated - 35 minutes ago
Not a single mention of the conditions that prisoners are living in... Lockdowns, no family contact for over a year, no meani... View
Lori J Tas - 3 hours ago
Kriso Hadskini there are currently rules around how much the govt can enforce people to pay back week to week, sadly, given h... View
Kriso Hadskini - 4 hours ago
Make the inmates pay the bills they cause, it is not rocket science.... View
Community 35

Mark Heinrich - 48 minutes ago
These things are not either or. There’s a need for multiple solutions to multiple problems. Don’t knock something just be... View
Cameron Murtagh - 1 hour ago
Abbey Snell https://domesticviolence.org/domestic-violence-against-men/ View
Cameron Murtagh - 2 hours ago
Something wrong with public housing for men too? View
News 11

@The_RiotACT @The_RiotACT
Around 250 people enjoyed a strip and dip in freezing temperatures this morning for @Lifeline_ACT's fifth Winter Solstice Nude Charity Swim! Were you there? https://t.co/8AcpLjpUyp (31 minutes ago)