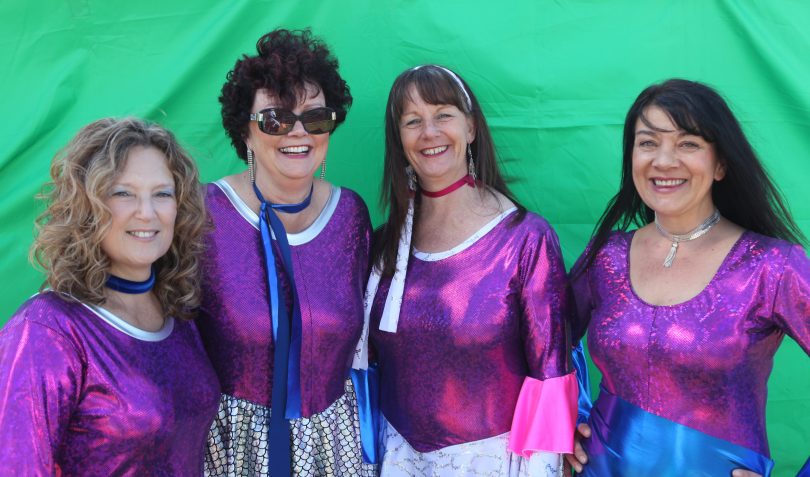 It’s not every day I get an opportunity to visit a small town I haven’t been to, let alone heard of. So when I was asked earlier this year if I wanted to go to an ABBA festival in Trundle, my answer was “I do I do I do.”

Admittedly a few days before the festival I couldn’t tell the Mr Minit man at Manuka where exactly Trundle was or how long it would take to get there from Canberra, when he asked why I needed to colour an old pair of knee high leather boots white.

The event drew around 5000 people on 5 May, providing both economic benefits for the tiny central west NSW town of less than one-fifth of that, and a lot of fun for die-hard fans of ABBA.

Normally held in the town’s main street and in various other locations, this time the event was held solely at Berryman Oval to accommodate the large crowds.

It all started in 2012 after local couple Gary and Ruth Crowley went to the long-running Elvis festival in nearby Parkes, and thought it would be great if they could also go to an ABBA festival.

But there wasn’t one, so they decided to create one themselves.

Joined by just two others – Gary’s sisters Sue and Pam – the four manage to coordinate everything involved with holding the festival while otherwise holding down full time jobs in the town.

Appreciation of their efforts is returned through people showing up in crazy wigs, feathers, sequinned costumes, white boots and white flares. 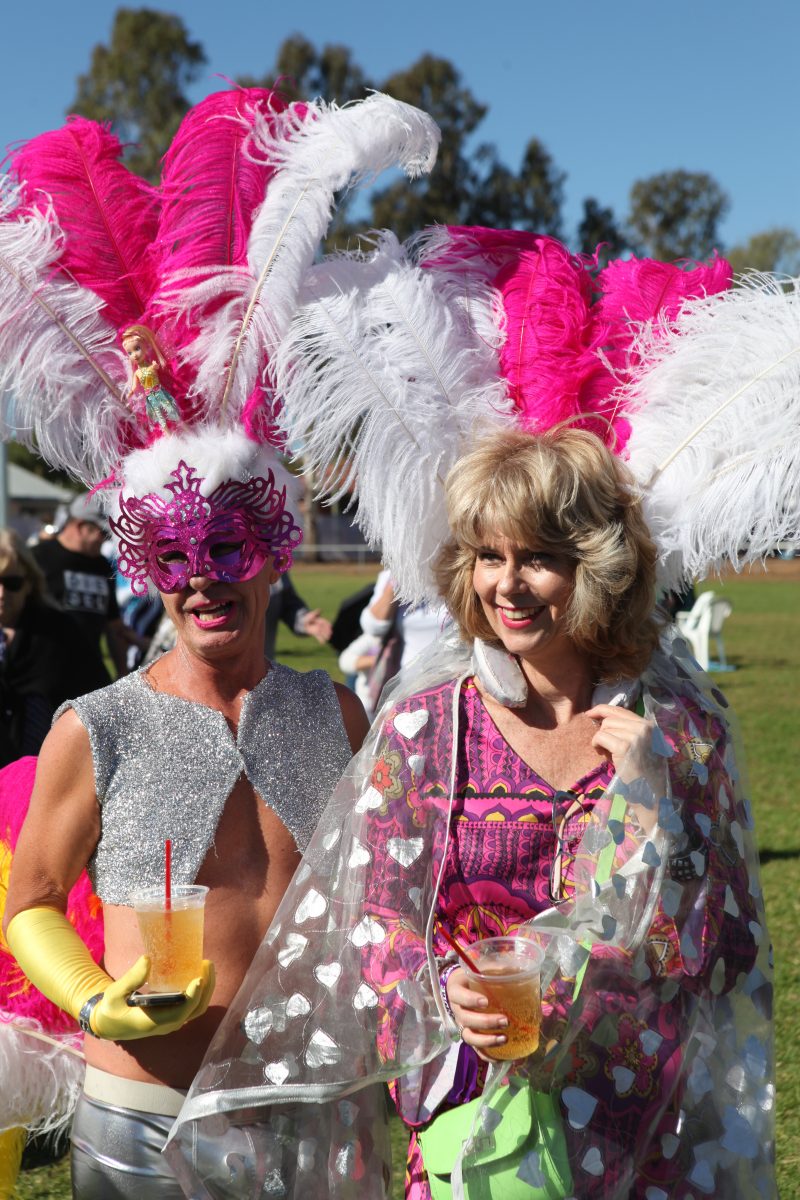 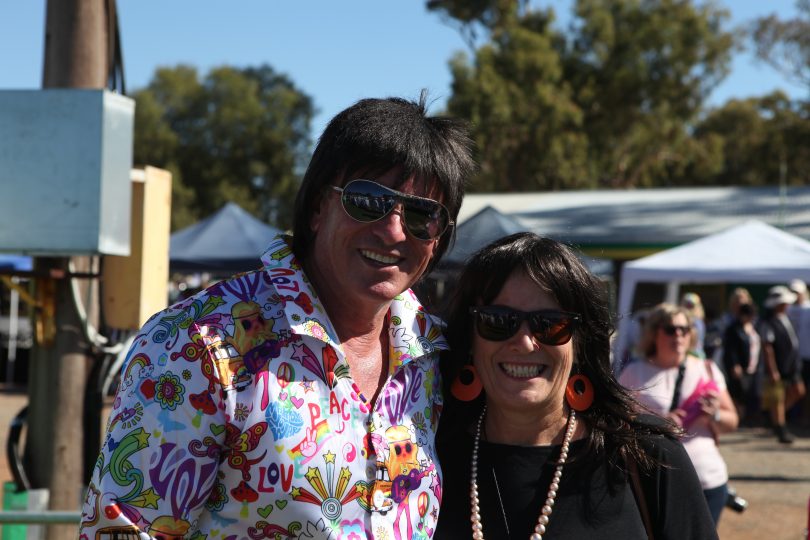 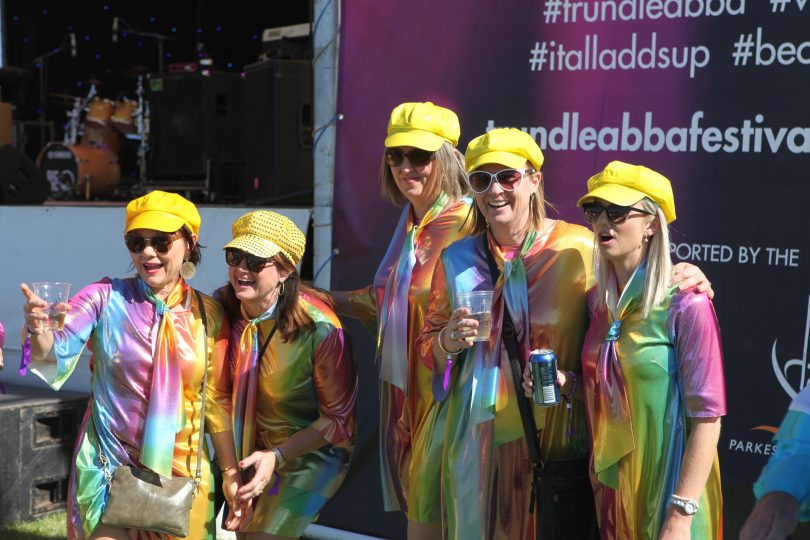 This year one group paid a tribute to Arrival, the 1976 album that secured ABBA’s global superstardom, by donning white jump suits and fluorescent wigs topped with small white caps and miniature helicopters. They were acknowledged in the hotly contested Fashions of the Festival competition, for best dressed group.

Kiama man Alan Waistell was best dressed man of the festival, for taking the trouble to build a replica of the Trundle Hotel, post office, hardware shop and its memorial hall, and wearing them on his head. The masterpiece took 30 hours to construct and wasn’t the easiest thing to get around in, considering he also wore ridiculously high platform shoes stamped with ABBA. 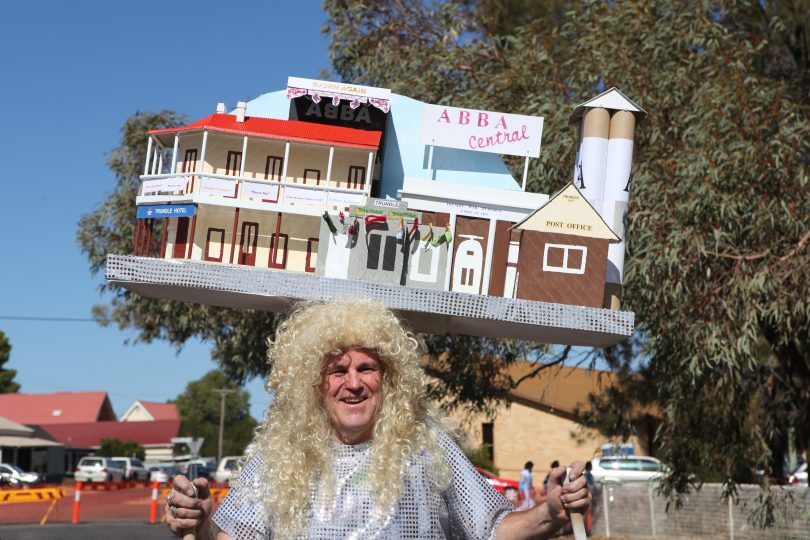 “I thought I would get a bit loud this year,” he said.

Local member and now Deputy Prime Minister Michael McCormack had the honour of judging the competition. Decked out in white bell-bottom pants, a matching shirt and fluorescent blue vest, he conceded it was an odd situation to find himself in.

“Would you believe I’m the deputy PM?” he joked.

“If only Malcolm could see me now, as I look very ridiculous at the moment.

“Please take a chance on me.”

For Robyn Abernethy, who now lives on the NSW Central Coast, the festival is an opportunity to return to her childhood home and catch up with her 88-year-old mum Nancy, and anywhere between 15 and 20 others who stay with them over the weekend the ABBA festival is held.

“I think its fantastic for the town,” she said.

As is now the tradition, ABBA tribute band Bjorn Again performed at the conclusion of the festival on Berryman oval, topping off the carnival atmosphere with all of the tracks from the Swedish group’s Arrival album, and a medley of other popular hits.

The band has performed more than 5000 shows in 70 countries in the past 25 years, and returned to Trundle for the fourth time this year.

Gee, 5,000 people. That’s almost as many as attended the Brumbies – Rebels match in Canberra last night.

Jody Berg - 1 minute ago
Jo Martyn , you should paint some! View
Mandii Bennett - 3 minutes ago
Betty Meiksa thanks for bringing joy View
Alice Caroline - 2 hours ago
I saw one in a tree along the Queanbeyan river walk💕 so cute! Such a gorgeous idea. View
Opinion 98

David Hunter - 15 minutes ago
Kimmy Hunter…..get ready 😂😂 View
Alex SmilyLex - 18 minutes ago
Juts not the coldest time of the year. Let that be Qld. View
Adam Allica - 20 minutes ago
Jon Billows they don't even pay to fill the pot holes, although they do seem to love speed bumps, so it would be amusing to s... View
News 18

Margaret Edwards - 19 minutes ago
That’s where I fell in love with aqua aerobics many years ago. View
Tracey Crump - 26 minutes ago
Lizzie Parlane I think the pools will remain open (post lockdown) but the fitness programmes, including aquarobics will cease... View
Lizzie Parlane - 4 hours ago
Incredibly disappointed. I have used both pools for 18 years now - through pregnancy, to teach my son to swim, to keep fit. T... View
News 23

nadine - 1 hour ago
Exactly, when our population was around 250k we had 3 hospitals. Our population as almost doubled but we only have 2 public h... View
whatwik - 2 hours ago
Any informed updates on schools in the ACT and Victoria planning to commence staged returns on 5 October, but NSW not until 2... View
Feedback - 2 hours ago
You can open up the ACT without opening up the ACT to other states. It’s about removing restrictions internally (as you wou... View
Lifestyle 32