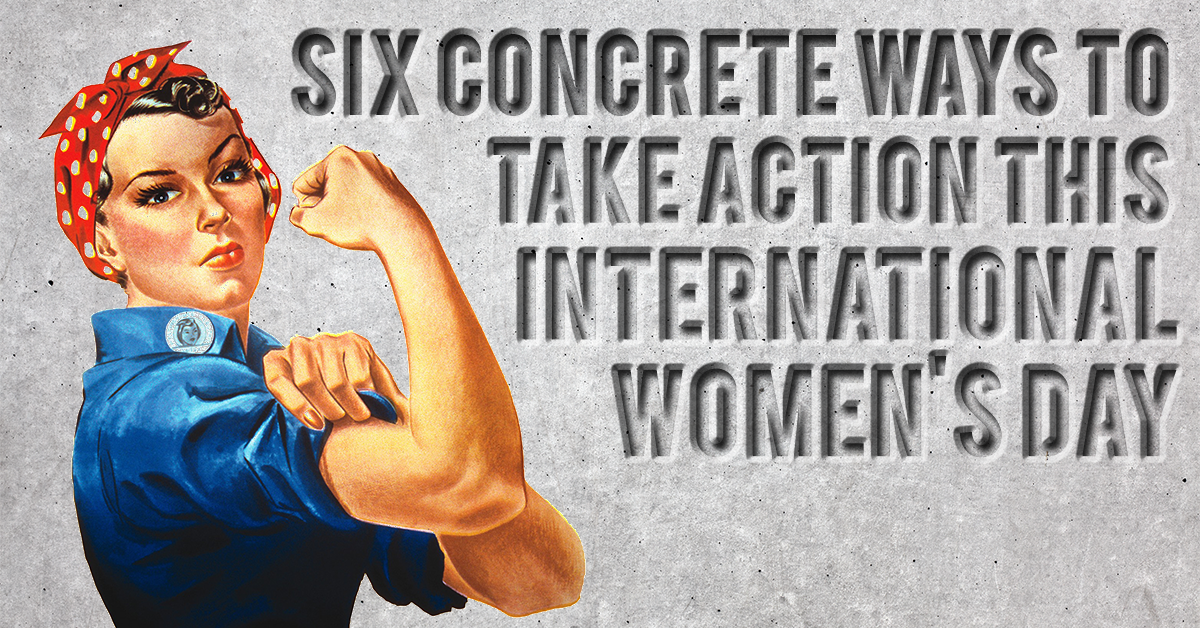 Vote with your wallet and support women in business, especially in male-dominated fields. Why not snag a beautiful bouquet from Moxom + Whitney or GG’s Flowers
or grab a bite to eat at Bookplate at the National Library of Australia?

While you’re at it, book in a date to see a female directed film (a woman hasn’t even been nominated for Best Director at the Academy Awards for seven years). My picks for 2017? Wonder Woman and Loving Vincent.

Talk to your co-workers about what they’re getting paid. There’s an unwritten rule that you aren’t allowed to talk about your pay at work. Why not? I feel like the only reason for this is allowing the exploitation of certain members of the workforce by keeping them in the dark about the actual distribution of pay. When I’ve chatted to co-workers about their level of pay, I’ve often found that I’m not being paid comparably to my (more often male) co-workers with similar responsibilities. At one workplace, I was able to ask for a raise to the same level, which was granted (yay!). At another, I was denied the extra cash, so I quit and found a job that paid 60% more (muahahaha).

3. Back yourself if you’re a woman

Make sure you apply for that job, or that raise – You won’t get it if you don’t ask. Research shows that men will apply for a job if they fulfil 60% of the requirements, whereas women will only apply if they believe they fulfil 100% of the criteria. So if you’re second-guessing yourself, don’t – go out there with the confidence of a mediocre white man, girlfriend.

Get in contact with your local Senator (Katy Gallagher, Zed Seselja) or MP (Gai Brodtmann, Andrew Leigh) and ask them to demand fairer taxation policies.

The Australian Government’s 2016 budget included a change to tax brackets that benefitted those earning over $80,000. The Australia Institute said that this change benefits high-income earners (those earning over 100,000) the most, with men (generally being higher earners) receiving 75% of this benefit. A better idea would be to increase the tax-free threshold, which would benefit all taxpayers, and put money back in the pocket of those who need it the most.

Also, ask them to stop taxing tampons. Just stop it.

In the 70s and 80s, orchestras began auditioning their musicians from behind a screen, so that their gender remained a mystery to the judging panel. Crazily enough, this simple innovation resulted in a 30% increase in women passing the final selection stage.

Similarly, when the Australian Bureau of Statistics advertised 19 senior roles and concealed the names, genders and identifying features of the applicants, they ended up hiring women for 15 of those roles. This meant doubling their number of female bosses in a matter of months.

It seems like such a no-brainer – this should be standard practice everywhere. If possible, talk to your HR department to ask about implementing some of these procedures.

6. Donate to the cause

If you can, donate to help women around the world. Here are some ideas to get you started:

How will you be marking International Women’s Day? Celebrating? Striking? Let us know in the comments!

Great list of things to do! When contacting your local representatives around the issue of fairer taxes, don’t forget to remind them not to change the rules around paid parental leave, or the family tax changes that will hurt our poorest families (most likely to be families headed by single women).

OMG yes, I didn’t even get to all the issues related with motherhood and how we could change this through different working arrangements and paternity leave. And the superannuation gap is horrendous!

7. Pay your child’s childcare worker a living wage. $17 an hour is a disgrace, and working women, including all those high-end successes, are utterly complicit.
8. Don’t pay your cleaning lady back pocket. She needs to be earning award wages AND receiving superannuation.

It’s crazy how literally raising and teaching children i.e. the future of this world is so undervalued.

A agree – it’s always better to take real action to make positive change. One suggestion I would like to see added to this list in future is to encourage female candidates to run in politics. No matter what your political persuasion you should support good women whenever you can at every level of Government.

Definitely – We need more women in politics and exec positions!

Great list of things to do! When contacting your local representatives around the issue of fairer taxes, don’t forget to remind them not to change the rules around paid parental leave, or the family tax changes that will hurt our poorest families (most likely to be families headed by single women).

7. Pay your child’s childcare worker a living wage. $17 an hour is a disgrace, and working women, including all those high-end successes, are utterly complicit.
8. Don’t pay your cleaning lady back pocket. She needs to be earning award wages AND receiving superannuation.

A agree – it’s always better to take real action to make positive change. One suggestion I would like to see added to this list in future is to encourage female candidates to run in politics. No matter what your political persuasion you should support good women whenever you can at every level of Government.

Cary Elliot Johnson - 2 hours ago
Get out. And i was feeling positive about asking Mr Gentleman about getting a Batcave Interchange developed in Lanyon. Booooo... View
Gloria Altinger - 2 hours ago
Could have bought all Canberrans an a electric car for what they spent on the tram...... View
Ric Hingee - 3 hours ago
So why wasn't the tram also canned? View
ACT Election 11

Jason Preston - 3 hours ago
Buying your vote with your kids View
Jesse Mahoney - 6 hours ago
Y'all are arguing with someone who likes Pauline Hanson. I wouldn't waste your energy View
John Hartley - 7 hours ago
Labour drunk on money till there is none left then tax go up there a joke and have and will be for a long time View
Lifestyle 8