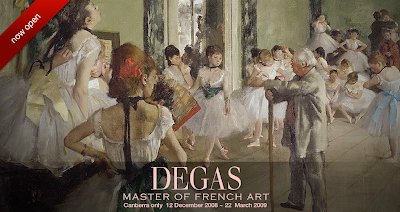 There’s a lot riding on the Degas exhibition at the National Gallery. Huge amounts of promotion’s gone into it. With all that ad money sloshing around media outlets have kept the praise up for fear of missing out on the moolah (and the invites to the next opening). Having no moolah nor invites I can safely cut free from the pack here and say the show has got some problems.

I’d noticed that the reviews from people who’d been were not glowing. Comments were running along these lines.

“There was one painting I wouldn’t have minded taking home”

“He certainly had thing for fat women’s bottoms”

I’d say there were at least four works there I’d love to have for myself. There might have been more, but it was hard to tell with the troubled curation.

It was dark in there. I know there are issues with preserving art works but other galleries manage to make it possible to see the works. Especially the large number of black and white monotypes (prints) they were almost impossible to make out in the gloom.

I literally got more out of looking at the post cards in the gift shop than from the originals. That’s shocking.

It was also crowded to the point of being nearly worthless. Cramming a lot of early works right at the start, particularly audio-tour tagged works, made for a nasty, unpleasant bottle neck. Given the other wonders of the gallery I could happily have been given a tour time when I bought my ticket instead of being jammed in willy nilly.

With the crowds forcing one back from the often small, faint, monochromatic, art works the feeble lighting was only made worse.

We also had the classic “plaque to nothing” problem. A wall would be adorned with a description of a work with nothing in sight. Turn around, peer in the opposite direction through the gloom and the crowds and one might notice, off in the distance, a sculpture sitting on its own, apparently related.

While they have 120 works on display as part of the exhibition the vast majority of them are part of mass runs, be they the prints or the sculptures.

I found the sculptures particularly troubling because they were made from works Degas had never exhibited, sometimes it seemed with good reason (although the miniatures of dancers were rather good).

The works also suffered from often being of celebrities of a bygone age. Without knowing in advance who they are it becomes a little meaningless.

So it’s a crowded, dimly lit, and often un-interesting collection of paintings of people who you were meant to recognise but don’t.

Another notable thing is the ban on sketching in the exhibition, made doubly ironic by Degas’ own early career where he learned by sketching previous masters.

Having said all that the man worked in a range of styles and that’s interesting to see. Some of his composition was simply breathtaking, and his study of movement is interesting.

But if you can’t get there at opening time (10am) or on a weekday to avoid the hordes I’d think seriously about giving this one a miss.

You’ll get more kicks from the slideshow on the NGA site, or as mentioned, the postcards in the giftshop.

Better curation and better crowd control could have saved a modest exhibition. But in comparison to other blockbusters of yesteryear this one left a bit to be desired.

Kerces you’ve caught me with my pants down. I didn’t know she’d gone to America. I doubt very much that she’ll ever leave the Louvre again though. Mind you, word is that the one the public get to look (and photograph with full flash) at isn’t the real thing.

I’d say there were at least four works there I’d love to have for myself.

Are you kidding – I’d take any of them considering how much they are worth! 🙂

I’d never heard of Mr Degas before this exhibition came to town . . .

You can’t be serious Jake!? Didn’t you see that old Mission Impossible episode titled “For Art’s Sake”. That was my first and only knowledge of Edgar Degas! And what a great episode it was.

You mean unlike the time she went to America, farnarkler?

Remember too that they haven’t all come from Paris. Some of the paintings are from the Metropolitan Museum of Art in New York and the J Paul Getty museum in LA. Ok Degas isn’t Renoir or Monet but it’s a chance for you to see a master. As Gertel said, the only other way to see such a comprehensive collection is to come this side of the World.

Pity La Giaconda won’t ever leave the Louvre. Despite her small size she is worth queuing for!!!

agree with the comment above. It wasn’t perfect but cheaper than flying to Paris!

the exhibition may be flawed but $20 isn’t too much when compared with $15 to go and see a movie.

I, too, found the gift shop more pleasurable than the exhibition.

I’d never heard of Mr Degas before this exhibition came to town . . .

The Degas nudes are gorgeous! I’m quite surprised that anyone could consider them fat, even in this day and age.

Jason Hutty - 17 minutes ago
Tim Van Der Vlist I'm not sure if you understand the economics of a member's club. The members own it. So yes, of course they... View
John Sands - 2 hours ago
John Ryan Steve Boege just means you should go to 19th hole and think about how you would have played... View
Fiona Wright - 3 hours ago
Irene Kelly greenkeepers made a mistake on the greens (in the article).. View
Property 22

Mick Gaffey - 1 hour ago
Just buy it already Jason Barton ✅ View
Amanda Sanderson - 5 hours ago
I’ll give you bottomless gin and tonics Peter Taylor 🤣 View
John Sheil - 5 hours ago
Well I have known 2 licensees over the years and neither have achieved any success. May need a new business strategy.... View
Breaking 5

chewy14 - 2 hours ago
You're assuming what he's saying is correct though. Whilst they do have controls to prevent vaccine "shopping" for people not... View
HiddenDragon - 5 hours ago
John Moulis' experience illustrates a serious flaw in the vaccination program. With the "advice" (a rather dishonest way of d... View
Maya123 - 6 hours ago
I should add that my mother also had AstraZeneca, but had no symptoms. So it varies from person to person. View
News 21

nealg - 9 hours ago
Heavy truck traffic, lack of footpaths and e-scooters not a good mix for Mitchell. View
show more show less
*Results are based on activity within last 7 days

New road safety cameras on Northbourne Avenue and Barry Drive in the city have identified around 5000 motorists exceeding the...
Opinion 162

Motorists involved in collisions with vulnerable road users may face a specific charge and much stiffer penalties if convicted under...
Opinion 162

Getting to the ‘art’ of dementia: researchers highlight benefits

@The_RiotACT @The_RiotACT
Find you're already stuck for ideas to entertain the kids over the school holidays? Look no further for inspiration, with workshops to tours and nighttime fun https://t.co/4Ey9eKhGEt (2 hours ago)

@The_RiotACT @The_RiotACT
There's a big week ahead in #Canberra with markets, music and comedy - there's something to please everyone https://t.co/wy6n8HbUv0 (3 hours ago)

@The_RiotACT @The_RiotACT
A new Auditor-General report has found teacher performance could not be adequately assessed as performance management has not been "implemented effectively" https://t.co/eyqWf1Q0IN (5 hours ago)