Terror law protestors take their mixed messages to the street

Sunday lunchtime in Garema Place was interrupted by about 100 protestors marching by with megaphones and half-hearted chanting. They sported aboriginal flags, banners on such subjects as “No Blood For Oil”, “Socialist Alliance”, they were waving copies of Resistance and Green Left Weekly. They were chanting anti-Bush/Howard slogans and looking for all the world like a generic anti-war protest.

Fortunately the banner at the front revealed the cause to be “Stop the War on Civil Liberties” and the Greens banner also said “Oppose Secret Police Law”.

So a highly admirable civil rights protest, the sort of thing I, or even my parents, might be tempted to join, was swallowed up with a vast number of mixed messages sure to alienate, in one respect or another, pretty much everyone not totally signed up to Right-On leftist dogma.

One message at a time and you might get somewhere.

An epic tale of boring proportions

“The great Gungahlin Drive Extension battles”
Sounds like the title of an epic tale…well it kinda is.

Save The Ridge = STR (O’Connor Ridge)

The great Gungahlin Drive Extension battles of the recent past.

I spotted a poster for that protest in Civic today. I don’t remember the exact text of it, but I do remember that it listed three topics for protest, and seemed to welcome most others. It would have been fun to antagonise them with a “Vote 1 John Howard” sign

Can’t these guys at least get together long enough to protest about one thing? Then again, what do you expect from your average ‘I protest against everything the Liberal government does’ type person.

I wonder if there were any STRers in there.

The guys that crack me up are the greenies… like slapp_monkey I agree with the cause… but when you see them driving off in their old bombs which does more damage to their cause than their protesting does good you have to wonder!!

Does poor spelling make my points anyless valid. I never claimed to be smart just that these guys annoy me with their idiot claims. Spoilt little brats playing at being rebels.

i agree, if i was opposed to the legislation, but in favour of the australian response to the war on terror, id feel uncomfortable marching with this rabble.

i wonder what sa are FOR ?

Actually, sorry Slapp, that was petty

I always get the sense that someone’s thinking – “damn it, I worked hard designing this placard and I’m bringing it”.

That said and strategic issues aside, it’s hard to come down on anyone for getting off their arse and doing something.

Quick note Slapp – if you’re going to accuse people of being stupid, don’t litter your post with spelling and grammatical errors. (6 if I’m not mistaken – though apostrophes still confuse me)

Damn those stupid wannabe anarchists, I would like to see how long they can last without some of the luxeries of the modern world. Those half brained semi interlectuals who believe that the world should be let loose to find it’s natural order.

Don’t get me wrong I agree with the protest but these resistance guys are complete tossers. They manage to undermine any protest with their idiotic behaviour. If one day in the future the whole government collapses and the country is thrown into anarchy. I’m going straight over to these tosser’s place and giving them a taste of steel cap opinion.

Kerces, I’ve been reading about the organisation of this protest, and those in other cities, for months.
I never said it was a last minute decision. The anti-terror laws have been on the surface of the poltical agenda for a while and it became a real concern to such groups when Howard tried to hurry it through parliament thus they decided to include their opposition to it in the protest.
It doesn’t take long to print up and put up a few posters.

Jey, I thought the posters I saw around Civic advertising the protest said it was a civil liberties protest, so it didn’t seem like a last minute decision.

And Joey, it was actually me took the photo and the placement was completely unintentional. They weren’t very co-operative protestors, I had to keep running in an attempt to get in front of them to manage a decent picture.

Unfortunately, that’s “Resistance” for you – never send one message when thirty will do, and never let the fact that other people might have some common ground with you on one particular issue stop you from smothering them with every other issue you can think of…

Every so often, it seems like they’re funded by the Liberal party to turn people off organised protest rallies.

JB, was it intentional to wait for the Socialists to get in front of Redpath’s before you took the photo?

Pity that the message gets lost in the noise during these events. Still, nice to see the mastercard marxists out for a Sunday stroll. I don’t see Senator Brown anywhere though.

Hey, that’d be great: start turning up at all sorts of protests with RiotACT banners, and see how many times you get coverage in the media!

I must wonder if JB would have taken photos of the RiotACT banner.

Sunday tends to be a fairly relaxing day for me…usually. Todays main activities included cleaning and folding up clothes. I’m not a terribly exciting person.

Sam, you should have been there with your RiotACT banner. (What on earth do you do on Sundays at home?)

No wonder I enjoy Sunday at home

The original intention of the protest was anti-war/bring the troops home but as the anti-terror legislation stomped on the political agenda it also became a focal point of the protest.

I do agree that one simple message is probably the best way to reach the public but I guess because there isn’t often an opportunity to protest they take the opportunity and cover a few bases at once. 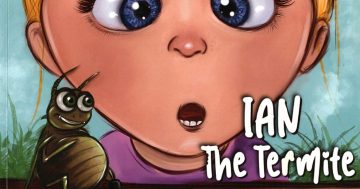 The Canberra Bookshelf: memoir, family messages and a cheery termite