“Within without” Massive monumental sculpture comes to the National Gallery 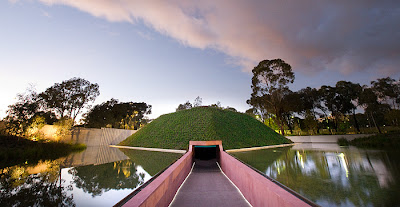 The National Gallery has put out a media release on a huge new feature on the lake shore.

Titled “Within without” it’s the work of the American artist James Turrell and is described thusly:

The only work of its kind in Australia, the partly subterranean installation creates an immersive viewing experience that uses space, shape and light to affect the perception of the sky.

Ron Radford AM, Director of the National Gallery of Australia said, “We are thrilled to open this astonishing work, Within without by James Turrell, one of the world’s most visionary artists.”

“The National Gallery of Australia commissioned Within without the largest Skyspace in the southern hemisphere, and now the largest work in the national collection. One of Turrell’s most complex Skyspaces, the sculpture is prominently located in the new Australian Gardens near the new front entrance. Within without will provide an inspiring experience for all visitors to the National Gallery”, said Ron Radford.

Entered via a long sloping walkway, the threshold to Within without opens onto a large square-based pyramid, with red ochre walls. At the centre of the pyramid, a pool of turquoise water flows around a central chamber, a stupa, made from Victorian basalt.

The simple domed space interior has a bench around the edge. The roof is open to the sky which is framed by an oculus. A moonstone, set into the centre of the floor, echoes the aperture above.

Within the installation Turrell reveals his striking centrepiece, the sheer beauty of celestial architecture. Light seems more painterly. Movement and sound are intensified and the sky at times descends into the space.

“My interest is working with light and space; I have always been fascinated with the range of light at different locations around the world. The opportunity to create a Skyspace for the National Gallery of Australia in the clear light of Canberra was not to be missed. Within without offers an unhurried and unique perceptual experience,” said James Turrell.

At dawn and dusk, Within without is at its most dramatic and vibrant. A specially created light show heightens the experience and spaces – within and without – the installation.

The gallery has more pictures of this behemoth.

After that it appears you’ll have to wait until the grand opening of the expanded galleries.

Tags james turrell National Gallery of Australia within without

Looks funky from above.

They have also done a bit of work in the last 6-7 months!

I checked this out at lunch time. It is really quite good.

Apparently they are doing some morning/evening viewings this week but they are all booked out and seemed to be offered to people with some connection to the NGA.

The staff member I spoke to mentioned the gallery extension could still be up to 8 weeks away from opening, although he didn’t offer a firm date. So it’s this week of previews and then no public access until the opening.

However, the site is very accessible with no perimeter fencing so I’m not too sure how they will close it down, short of having a security guard on permanent watch whenever it supposed to be closed.

I’m sure the waterbirds of Canberra would like to thank Mr Turrell for his contribution to their habitat.

Looks funky from above.

On the ABC News last night it was mentioned there will be special sunrise/sunset viewings at some stage in the future.

More “art” from the school of “If you can’t make it good, at least make it oversize!”

Awesome factor spf30+! I remember once watching a doco on similar installations. There was a chapel or mausoleum where the different black surfaces changed, depending on when you were viewing.

Why o why would you preclude viewing at dawn and dusk? Surely those are the periods where the light contrast grows most.

I really hope nga runs some ‘out-of-hours’ sessions for this particular piece.

At dawn and dusk, Within without is at its most dramatic and vibrant…

According to the website, when it opens permanently, 10.30-4.30 will also be the opening hours.

So, who will be seeing it at its most dramatic and vibrant?

How exciting! I mean it too – no irony there.

I noticed all the fences were down as I drove past on my way to work this morning. Might have to check it out.

Lyn Kemp - 8 seconds ago
Congratulations Ricky. Well deserved 👍👍👍 View
Doug Hearne - 1 hour ago
Has done heaps of loyalty work for the Canberra region deserves credit for his efforts on and off the field 👍🤙😆 View
Community 5

Graham Wilson - 1 hour ago
A decent Shopping Centre would be a better option at the moment. A lot of Queanbeyan people shop elsewhere and with the growt... View
Stephen Roberts - 1 hour ago
Wasn't there a bike club named "struggletown tourers' View
Scott Abela - 10 hours ago
Struggle town View
Opinion 47

Kacey Butterworth - 10 hours ago
I feel extremely privileged to have had Ben as a mentor, teacher and year co-ordinator throughout my high school years. He ta... View
Annamaria Zuffo - 13 hours ago
Fantastic Ben. Lucky kids and us for knowing you. View
Vicki Favelle - 13 hours ago
Thank you Ben for being the teacher that you are. We will always be so grateful that you taught our Charlie. An amazing teach... View
News 13

Paul Leins - 13 hours ago
Chinmoy Misra so you're saying *you* can't maintain a reasonable speed in built up areas without some kind of ridiculous urba... View
Jeff Shapiro - 13 hours ago
Ken Owers you need an idrive adapter or buy a Mercedes View
Chinmoy Misra - 14 hours ago
Paul Leins Congratulations. You missed the point entirely.... View
Business 63

Have you spotted the Dining Dome at The Dock on the Kingston Foreshore yet? This new Canberra dining experience has...
News 1

Discount carrier Jetstar will launch a new Canberra-Brisbane route from 2 September with five return services a week. It will be...
*Results are based on activity within last 7 days

Art in the time of COVID-19: Bega gallery offers virtual tour of The Ambassador

@The_RiotACT @The_RiotACT
Gungahlin is often seen as the new part of Canberra, but some locals have lived their whole lives there. The town centre is already big and it's still growing https://t.co/Kqq2xR1Mmm (13 hours ago)

@The_RiotACT @The_RiotACT
Opposition Leader Elizabeth Lee said she has received "a huge amount of interest" for her stealthing bill, which she says is a positive first step to raising awareness about "the existence of such a heinous practice" https://t.co/YQDtFOWLYU (15 hours ago)