Canberra Goss – The suspense is killing me 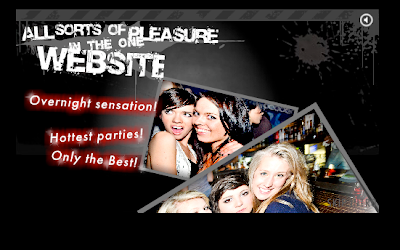 The Canberra Goss website proclaims that it is going to do something more useful than run a hideous flash animation sometime on Monday.

Intriguingly it promises to bring you “ALL SORTS OF PLEASURE IN THE ONE WEBSITE” including:

As you can imagine I am barely able to contain my excitement at the thought of all this pleasure.

Canberra Goss is a person on Facebook, with rather a lot of friends, and there’s a popular FB group which is all very impressive for a placeholder. Apparently there’s some sort of link with Academy.

Best of luck to them.

UPDATED: Well they’re live now with a heady mix of advertorial, competitions (they seem to have a lot of Xbox 360s to give away which makes me deeply jealous on several levels), and stale old content. The insistence on using flash as a key design element of the site is particularly painful. That said, and using flash as a content element, I’d like to dedicate this song to them:

I think that that might be the same one she was referring to. I slipped it into a post on teh Canberra Gross site…

Peter you’re pretty much the last person they’re trying to run the site for, no great loss to them there.

Well, at least I got to see the official webpage of The Democratic People’s Republic of Korea ….

censoring the comments, but not the “F” word, or the “C” word?

canberra goss. comment what WE want you to, or be deleted.

The Rioters appear to be the only ones on that site that can spell and use correct grammar.

I just reposted my vote for Granny. I refuse to to be silenced…

I don’t think I’ve ever had a nicer compliment than that. Usually people comment on how much worse I look than a wigged dolphin.

Now I can’t even access the site, and see 100% packet loss on pings.

But the entire Delta Goodrem – dolphin – Vote for Granny series was:

Post 1 by ItsaMeMario:
I had the misfortune of being at my friend Simon’s house one night while his girlfriend was watching Australian Idol. Delta Goodrem was a guest and played her new single, cant remember what it was called but it sounded like something from the movie Titanic so i guess she was ‘on brand’.
When Delta first appeared a few years back, I seriously wanted to sleep with her. Seeing the mess she was on tv, I cant believe what dreadful taste I actually have.
When I was about twelve, my sister had an eighties newsagent book series on how to apply makeup. I swear that the preteen girl on the cover, made up to look like what I assumed at the time to be a zombie, was identical to Delta Goodrem’s ‘look’ last night.
The covergirl had crimped long blonde hair, enough bronze coloured foundation smothered on to look like greased plasticine and black eyeshadow with a hint of cobalt blue. The dress Delta was wearing I have no name for, kind of like a black shiny full length poncho or one of those rug like covers you see Egyptian people wearing in the indiana jones movies.

Post 2 by ItsaMeMArio
Dolphins can hold their breath for up to eight weeks but need to surface occassionally to look around as they cannot open their eyes under water.
Dolphins are not fish. They are mammals. They give birth to live offspring. Usually each dolphin gives birth to eighty or ninety calves at a time but few survive as the mothers eat their young.

Fact: If you put a wig on a dolphin, it looks better than Delta Goodrem.
But not better than Granny.
+1 Granny.

After this, people heaped shit on ItsaMeMario for being overly long-winded, and comparisons of him to John Howard.
Why Canberra Goss’ readership believes John Howard would ramble at length about Delta Goodrem or dolphins, I have no idea.

Nothing wrong with trolling places infested with idiots, in fact it’s a duty.

It’s cause you is hot, innit!

Frankly, I can’t understand why they would have taken such a disliking to me, p1!

Being a troll is bad. And if you go trolling you’re bad. ‘Cause trolls are bad. Don’t be a troll.

Michael Ilsley - 1 hour ago
How lucky are those children going to be being taught by such an incredible person. View
Rhonda Maxwell - 5 hours ago
Brad is an amazing young fella who is living a full life. His family and friends are s wonderful support as is his footy team... View
Pam Perkins - 5 hours ago
A very inspiring young man all the best in all your future endeavours and wonderful community support... View
Community 10

John Beagle - 2 hours ago
100% correct Gordon. The toilets are a disgrace. They appear to be the original 1999 edition, and the only illumination is on... View
News 6

aussie2 - 16 hours ago
Firstly I would be challenging directing all southbound traffic to Woden interchange. We are spread out. Surely those outside... View
chewy14 - 18 hours ago
I actually like what they are proposing here and I think integrating the CIT into the new development space is a sensible mov... View
JC - 22 hours ago
So true. It’s far easier to whinge about anything and everything. Though think the core issue is many here just don’t lik... View
News 9

@The_RiotACT @The_RiotACT
Despite their scary appearance, blue-tongue lizards are laidback and loved in Canberra. Ian Fraser asks if there's a familiar bluey in your backyard? https://t.co/pTVszMYre7 (14 minutes ago)

@The_RiotACT @The_RiotACT
A new public housing complex in Dickson will provide 20 new homes. Meet some of the excited tenants who are moving in https://t.co/cDzC1xhW3Q (3 hours ago)