A century of the PS Canberra 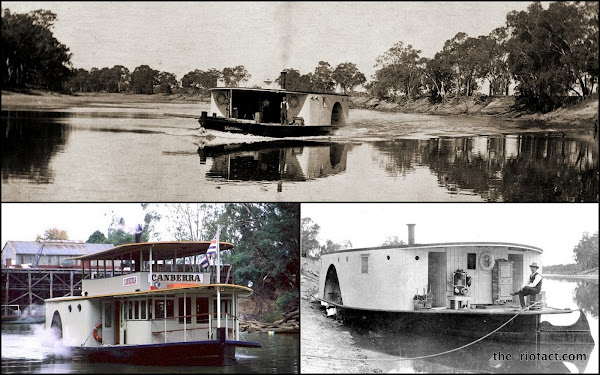 P.S. Canberra sounds like something an intense young woman would use as a blog name.

But it turns out the Paddle Steamer Canberra is also turning 100 this year.

The Centenary Team are sharing the news:

The vessel will join the world’s largest paddle steamer fleet on Friday, 2 August, and sail along the Murray River for a weekend of celebration at Echuca.

“It’s wonderful to see the Centenary celebrations spreading beyond the nation’s capital in this way,” Mr Lasek said.

“It has been an incredibly broad, year-long celebration, and this is another special event that helps tell the story of Canberra.”

Launched on 2 August 1913, PS Canberra is one of the longest-serving tourist vessels on the Murray River and a major attraction in paddle steamer tourism at Echuca.

Jonathan Nicholl - 2 minutes ago
Andrew Dale I work in a private business and now work mainly from home. Depends on the job I reckon... View
chewy14 - 13 minutes ago
Wow, For a party that is apparently against systemic discrimination, they sure do propose a lot of it.... View
Steven Campbell - 19 minutes ago
If we lump all the actual work that get done by a public servant in a week. A one day work week will suffice. View
Food & Wine 45

paulmuster - 47 minutes ago
I had a good chat with him at the local shops while he was out campaigning. His understanding of policy issues in the ACT was... View
News 47

Edd Dornan - 1 hour ago
Ok thanks didn’t know that View
Bill Gemmell - 1 hour ago
Edd Dornan the dude that was sacked on the same date that Ned Kelly was hanged View
Edd Dornan - 2 hours ago
How about selling that stupid tram we could of do a hell of a lot to the cities traffic problems. With all the Billion Spent... View
Food & Wine 29

Marcel Bond - 3 hours ago
I don't know what the answer is...hell, when it comes to drugs I'm not even sure what the question is. But one thing I do kno... View
ssek - 7 hours ago
Is this bloke serious? “There is no more stigma that you can put on someone than calling them a criminal for something that... View
News 3

HiddenDragon - 4 hours ago
Interesting summary - thank you. The release of the letters on Bastille Day is doubtless a complete coincidence......... View
Stephen Saunders - 5 hours ago
Though the Palace was in the plot up to their eyeballs, Elizabeth and Charles "weren't told" on the actual day. No wonder Cha... View
Sport 1

Kathy Schneider - 7 hours ago
Yes having bad luck with injuries really makes it hard to get to the finals. View
show more show less
*Results are based on activity within last 7 days

Chief Minister Andrew Barr has stepped into the row over Geocon's plans to build a six to eight-storey apartment building...

A troop of former Australian War Memorial officials opposed to its controversial $500 million redevelopment will line up before a...
News 46

The ACT Government's decision to give a Fyshwick recycling proponent the green light to lodge a development application has left...
Food & Wine 45

@The_RiotACT @The_RiotACT
Crepe-lovers of Canberra, get excited because a new café dedicated to churning out crepe perfection has landed in Braddon https://t.co/xrGcJ8A4QN (2 hours ago)

@The_RiotACT @The_RiotACT
The ACT Greens have put women at the centre of their gender-recovery COVID-plan, focussing on a four-day work week and more work-from-home opportunities in the ACT Public Service, as well as gender weighting in criteria for funding or contracts https://t.co/RIpCqj1Dmj (4 hours ago)