A farewell to a Bunch of Fives 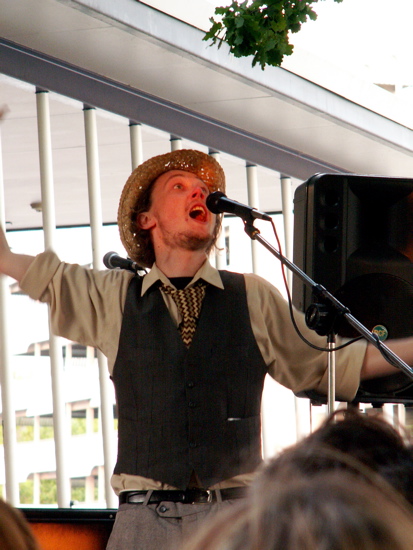 Normally here I try and limit reviews to things there’s a reasonable chance the readership can go and see for themselves. But today I’m making an exception.

A Bunch Of Fives has been a regular fixture on the second Friday of the month for years now. Finish work, get down to the Street Theatre, sit under the trees in the dusk sucking down reasonably priced beer and get entertained by a series of actors and musicians.

But the Street Theatre has decided it doesn’t want it any more. And in his last email invite the Bunch of Fives maestro, Jorian Gardner even went so far as to include me in his list of fake quotes:

“A Bunch of Fives is one of the best things about Canberra….that and Jorian’s ass”
John-boy, RiotACT

So how could I possibly stay away? You know you’ve truly arrived in this town when Jorian starts putting words in your mouth.

So here’s some pictures and music from the evening, the audio was taken in the middle of the crowd and gives a good feeling for the hubbub:

It wasn’t as raucous an affair as some in the past, too many feelings of loss and finality.

But it still had the ability to make the audience laugh and smile, and to feel sad, and to reflect, and then laugh again.

Best of all it was another glorious evening under the trees, outside the theatre, sucking down beers and nibbling on finger food.

There will be other things, other events, to entertain us. But for now it’s a little sad.

Whatever the Street Theatre puts on in its place had better be seriously cracking.

Further clarifcation (if all else fails, ask the source): it’s not quite the bunch of five replacement I may have implied – monologues will be workshopped once a month, but there won’t be a performance for the general public until December. So there’s stuff in it for writers and actors, but not so much for the general beer-theatre-and-music-consumer.

If you’re out there and you do have a monolouge to submit, or you’re an actor and you want to help out in the workshops, e-mail jarrad.west@gmail.com.

Well, the CT writeup didn’t mention anything about music, just monologues. It’s possible, I suppose, if interested musos approached Rep about a gig, they might get some interest…

well, i wouldn’t get that at the street either

how about the music?

Admittedly, not with Ziferholtz, but you can’t have everything

Is there a bar?

From the canberra times on saturday – Canberra Rep Studio is doing a monologue competition next year, which includes public performances each month. It’s about one hundred metres up the hill from the Street. So it looks like there’s a replacement already!

Shirley Troy - less than 1 second ago
Hope the strengths of community spirit ,awareness and support continue when this Crisis is over. View
Scott Bowen - 11 hours ago
This is amazing news! View
Anne Atherton - 19 hours ago
Love our community spirit View
Property 46

Rauny Worm - 15 hours ago
Tom Porter ..there is a youth specific faculty but only for emergency treatment not for therapy. There are still so many gaps... View
News 6

Jacqui Donegan - 17 hours ago
Cooleman Court could (again) be a wonderful local precinct ... but it’s a mess - no parking, scrappy streetscaping, and a s... View
Angela Davey - 19 hours ago
Why not open shops in Coombs. Wright Denman Prospect before building more car parks. View
News 9

@The_RiotACT @The_RiotACT
It’s a long way from Young to Nashville, but 17-year-old Harry Cleverdon has been selected as a finalist in the 2020 International Songwriting Competition & you can vote for him in the People’s Voice award https://t.co/4EQKs7bIfT (5 hours ago)