If walls could talk, those of the Forrest Fire Station would have plenty of stories to share from around half a century of firefighters having worked and lived within its confines from 1939 to 1983 – including an apparent ghost which is said to inhabit it.

Those firefighters who often served alongside ambulance workers in the early days, attended thousands of residential, industrial, bush and grass fires across growing Canberra, which had a population of around 10,000 when they moved in.

Now operated by the Fire Brigade Historical Society of the ACT, Forrest Fire Station houses thousands of pieces of firefighting memorabilia, and offers visitors a rare glimpse into the early days of firefighting in Canberra.

Ron Hourigan works as a tour guide on Saturdays when the Forrest Fire Station Museum is open to the public, and he spends a fair bit of time working on restoring and organising the station alongside other volunteers.

He was a firefighter from 1983 to 2013, and says he really enjoyed the action and “would still be out there if Father Time hadn’t tapped him on the shoulder”. 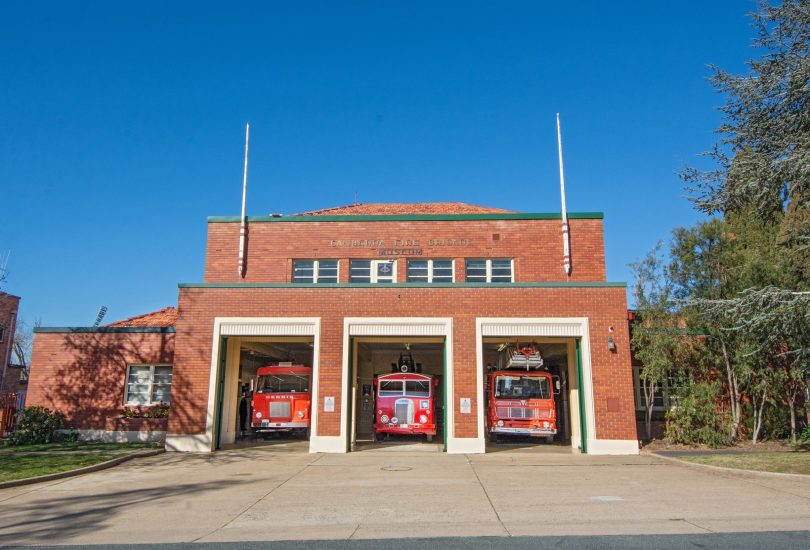 Forrest Fire Station has a massive collection of firefighting memorabilia dating back to 1913. Photo: Tracy Ryan.

The moments that stick with Ron are not just the big ones – such as the 2003 Canberra bushfires – but also the countless house fires and accidents they would be called to without knowing what would be awaiting them.

For Ron, like many other retired firefighters, it’s important their stories are memorialised because they have been a part of Canberra since the city’s early days.

“Percy Douglas, who was a bit of a character, was the first chief and he arrived in 1912 and built up the station as well as being heavily involved in the community,” he says.

“After going away to World War I, during the World War II he recognised what it was like to be away from home so he’d run a dance every Saturday night for the servicemen in Canberra.”

READ ALSO: ‘We’re all in this together’… until you’re not

Architecturally, the Forrest Fire Station precinct has long been acknowledged as a key piece of Canberran history. Designed by government architects EH Henderson and Cuthbert Whitley, it’s the last remaining example of government-sponsored functionalist residential architecture in the ACT.

The station’s design was considered to be quite unique because the residences were for employees to live in, meaning they’d be close to work if required, and in a very innovative move for the day, garages were also attached to the residences, acknowledging for the first time the new status of the automobile.

At the time, there were protests from local residents against the small staff homes as they felt they would negatively impact the values of their properties, but the project went ahead anyway.

The only change to the building since it was built was it being lengthened in the 1950s to make room for a new ladder appliance which was never received.

Both the Forrest Fire Station and residences are listed on the ACT Heritage Register and the ACT Chapter of the Australian Institute of Architects’ Register of Significant 20th Century Architecture.

Rumours also circulate online that the Forrest Fire Station is haunted by a ghost called ‘Bluey’ – supposedly EW Fleming, a cadet firefighter who died in a RAAF training accident near Wagga Wagga during World War II – who is said to be occasionally heard by people at the station.

Unfortunately, or perhaps fortunately, for Ron, he hasn’t yet come across Bluey, but says the old station does tend to creak and groan a bit at night so the noises firefighters might hear could be put down to that.

The Forrest Fire Station Museum is open to the public most Saturdays from 10:00 am until 2:00 pm for a donation of a gold coin to help keep its various projects operating.

One Response to A ghost called ‘Bluey’, heritage architecture and a long history of Forrest Fire Station serving the community
Filter
Showing only Website comments

This is a fabulous precinct. Pity it is being eroded by development of some commercial premises that is right out of character.