A good news story for the ambos 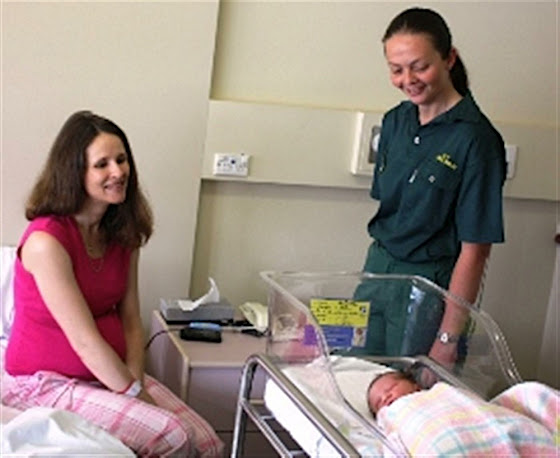 The McGrath family first rang 000 yesterday afternoon around 5:30 (Wednesday 24 November 2010) to request an ambulance for expectant mum, Georgina, who had just gone into labour.

A second called followed a few minutes later when the baby delivery process stepped up.

Ambulance Support Officer Sally Jaggard, nearing the end of her shift, answered both calls for help.

She talked husband Declan and his mother-in-law through the process in a calm and confident manner including what to do when the baby arrived with the umbilical cord wrapped around its neck.

After following Sally’s directions to remove the cord and clear the airway, baby cries started ringing out in the Gordon home to the relief of everyone.

Right on cue an ACT Ambulance Service crew then arrived at the house and took over from the very relieved dad.

Mum and baby were checked over then transported to the Canberra Hospital. She later transferred to Calvary Private Hospital.

The proud parents took time out today to thank Sally in person for her assistance with little baby Euan by their side.

Sally took it all in her stride stating she just did what she has been trained to do.

“I have had some close-calls with babies being born before but our ambulance crews always turned up in time but this time the baby wouldn’t wait. He was born within a few minutes of receiving the second call. It was a great way to finish a shift,” she said.

Great story (but why would this go down as a “A good news story for the ambos”? They do a bloody brilliant job everyday!

You know what would be nice. If anyone spots the Ambos having coffee after a shift (Woden), that they slip in side and pay the bill. I’ve always wanted to do that.

Bravo! Well done to all.

Julie Macklin - 1 minute ago
James Dof, I take the train, because I like the train much more than the bus. I can get get up and move around, plus there's... View
James Dof - 14 hours ago
I take the bus to get to the bus terminal with luggage and like I said it's 45 mins to civic and an hour less travel on the b... View
Julie Macklin - 14 hours ago
James Dof A bus every 15 minutes from Civic. In practice thought I imagine most people, even if there is a regular bus from w... View
News 27

Trish Roberts - 17 minutes ago
Yes. Does not want to hear the opinion of older people. Well, one day, if he’s lucky enough, he’ll get old, too!... View
Business 4

Vanessa Schultz - 6 hours ago
Too young, and always a happy football mad kid, I grew up across the road in Hopetoun Circuit Yarralumla from the McInnes RIP View
Carol Jean - 16 hours ago
So sad, a true gentleman View
Stephen Keir - 18 hours ago
Sad news Always polite and genuine. View
Opinion 48

@The_RiotACT @The_RiotACT
“Witness J” speaks to Genevieve Jacobs about being incarcerated with Canberra’s sex offenders, his anger and his fears about our nation’s growing secrecy https://t.co/0X7XNZbVN4 (1 hour ago)