A Lie of the Mind – At the ANU Arts Centre 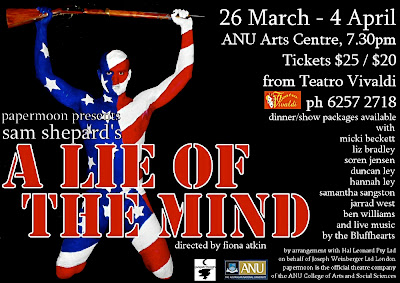 papermoon presents Sam Shepard’s A Lie of the Mind

papermoon is proud to present its first show for 2009, Sam Shepard’s A Lie of the Mind. The most adventurous and large scale of Shepard’s so-called ‘family plays’, A Lie of the Mind is an epic exploration of physical, mental and emotional violence.

Winner of the 1986 New York Drama Critics Circle Award, A Lie of the Mind movingly traces the lives of two families connected by the violent, abusive marriage of the son of one to the daughter of the other. papermoon’s new production of this American classic – the first in Canberra for some 20 years – is at once harrowing and hilarious, showcasing both Shepard’s lament for families in crisis and his dark, wild humour. Director Fiona Atkin, who is undertaking doctoral research on Shepard at the ANU, has realised the production with painstaking fidelity to the playwright’s vision.

Mirjam Herzog - 2 hours ago
Chris Cross' pro argument citing the rates income from diplomatic missions is a highly contentious issue as the concept seems... View
Julia Ross - 11 hours ago
If it gets developed by the usual developers in Canberra, it will be a soul-less concrete wasteland like Gungahlin which will... View
Mark Valerius - 11 hours ago
A great idea for space that’s used for sweet FA. View
News 7

Conrado Pengilley - 10 hours ago
The Chi-Na virus will be contained. View
News 61

Ekaterina Smirnova - 15 hours ago
What could possibly go wrong? View
Christopher Miles Y Lopez - 16 hours ago
The ACT is under the throes of a neo liberal pseudo scientific dictatorship right now. I'm sure that the space that will be m... View
Peter Marshall - 20 hours ago
If the magistrates and judges stop sending new people into prison, or expecting remandees to turn up to court, and if no-one... View
News 3

dcollins - 20 hours ago
I don't see a problem. I don't think maintaining paddocks for the private use of a few horse owners is a priority. Different... View
Julia Ross - 20 hours ago
How many flippin' embassies does Canberra need? Why do they all have to be on prime land? What about using the land to build... View
jof50 - 23 hours ago
The myopic and shouty Guardians of the Lake are stuck in a time warp. They want to put a glass bowl over central Canberra and... View
News 235

dcollins - 21 hours ago
All investments have their risks, it's only that lots of property investors don't get this, they have this weird sense of ent... View
News 14

Six new cases of COVID-19 have been confirmed in the ACT overnight, bringing the total to 77, including two who...

Canberrans will soon see perspex barriers at the checkouts of Woolworths supermarkets as the chain moves to decrease the risk...
Motoring 77

Despite world oil prices plummeting in recent weeks, Canberrans are still paying through the nose at the bowser. At Weston,...
News 22

@The_RiotACT @The_RiotACT
It's time to learn to love Bruce Stadium because it will be here for a while, writes @TimGavel https://t.co/WFGqPdDsZX (39 minutes ago)

@The_RiotACT @The_RiotACT
From sharp increases in demand for services to cancelled fundraising events, Canberra’s community sector is having a tough time weathering the COVID-19 storm https://t.co/fUHYSBtSU5 (10 hours ago)