A look at: Massive Love of Risk, The Art of Splinters 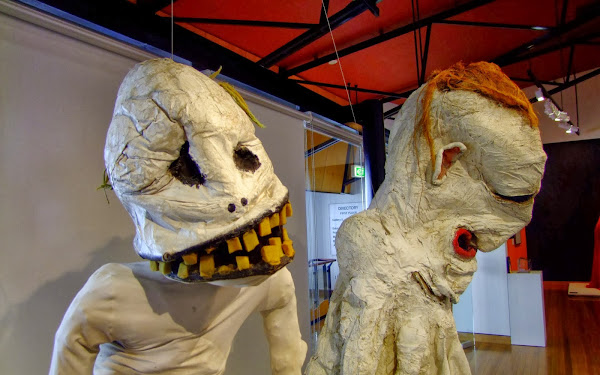 I wasn’t terribly excited about visiting Massive Love of Risk: The Art of Splinters Theatre of Spectacle. The cynic in me wondered how good a exhibition about a local theatre company could be.

I don’t mean this as a slight to local theatre companies. In theatre, as in all things artistic, Canberra’s cup currently and has always overflowed with passionate and inventive practitioners. No I think I was worried that the exhibit would be nothing more than a bunch of old show programs, some posters, a few props, and some wanky pieces of praise written to explain and frame the exhibits. The kind of thing for people involved to look back on and remember how great they were, and to allow them the chance to say “You had to be there” to anyone looking at the exhibit without the benefit of nostalgia.

I wasn’t wrong about the content, but I was very wrong about not enjoying it and the need to have been there.

I was not there, but I liked the posters, the programs, and the wanky praise.

I really liked the props. 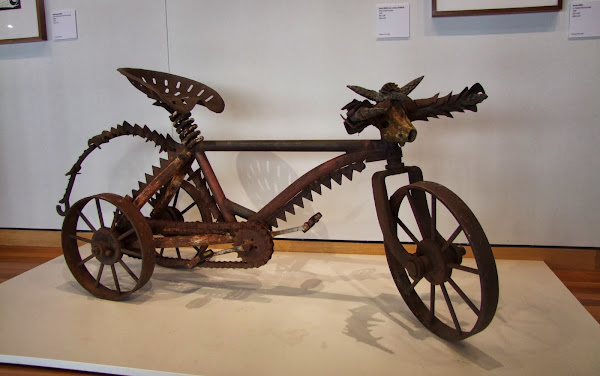 Splinters was a collective of performance artists in Canberra in the 80s and 90s that specialised in spectacle and daring productions. This exhibit does an admirable job of capturing that feeling of creative bravery and it’s hard not to walk away feeling a little inspired.

There’s a chaotic yet polished feel to everything in the room. Posters painted on newspaper, rusted bikes forged out of steel, and a pair of the most gorgeously grotesque puppets.

A massive cornerstone of the company was obviously the late David Branson. Many of the theatre makers I’ve worked with and known over the years hold David Branson in high regard, but sadly I never got to meet the man. While I’ve experienced echoes of the man’s influence all over Canberra, in the stories and work of those he inspired, and in projects he worked on such as Michelangelo and the Black Sea gentlemen, this exhibition is the first time I’ve felt I’ve actually gotten a real sense of who the man was and what he did.

One of the play posters.

Go check it out. I am recommending it, and placing whatever value my opinion has there. It’s fun, pretty, and reminded me of a time in my life where theatre seemed all powerful and could do anything. This is a wonderful thing because it’s worth remembering that theatre is all powerful and it can do anything. 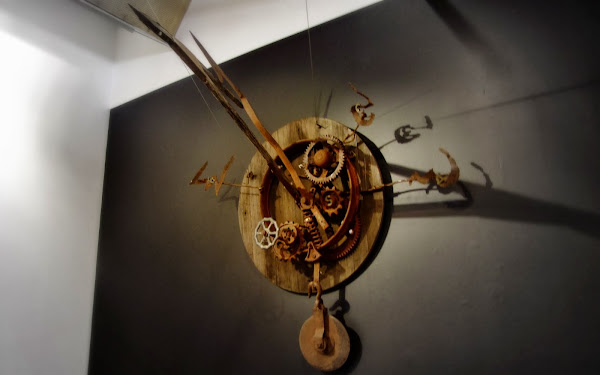 Also it’s at CMAG. I did a review of sorts of CMAG when I first started working here and the overall message of that review was “CMAG is RIGHT THERE! It’s just THERE! It’s also FREE! FREE and JUST OVER THERE! So go, you’ve got no reason not to.”

So that again. More than simply being free and conveniently placed CMAG also happens to be quite a nice place with nice people and nice things in it. The guy behind the counter complimented me on my Pokemon badges. Another employee at the cafe treated me to a passionate argument on why gold is useless and how mankind would do better by valuing more useful elements like iron above it. Both exchanges made my day better. 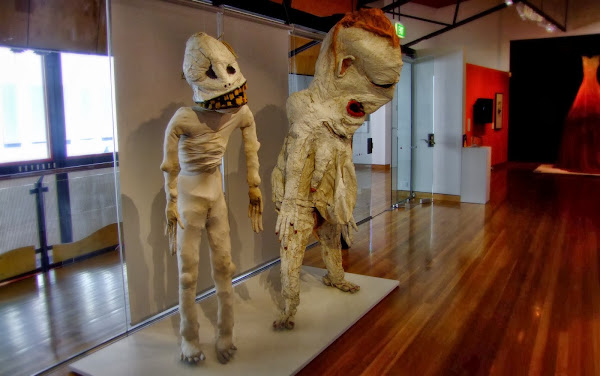 Also, while you’re there be sure to check out Cloud in Gallery 4. Clare Martin has made a giant cloud shaped kinda like a speech bubble out of tiny toy army men. It’s quite rad.

One Response to A look at: Massive Love of Risk, The Art of Splinters
Filter
Showing only Website comments

It’s always worth a quick look in CMAG when in town. As the OP said – it’s free and easy to get to. There’s almost always something interesting to look at.

Tina Maree Williams - 1 hour ago
My other half and I saw the writing on the wall when the eyesore of Whitlam increasingly impinged on our view driving down Wi... View
Demi Naylor - 8 hours ago
Well.. you know.. f they can afford a house or find one suitable to rent.. View
Julie Macklin - 9 hours ago
Marc Edwards That can made it worse for public transport. It's okay for those living nearby, but for people in other parts of... View
Community 53

@The_RiotACT @The_RiotACT
The Canberra Hospital Expansion project start is within sight. Will it deliver the goods, and on time? https://t.co/VlDl3D7QxQ (1 hour ago)