A new brolga for Tidbinbilla. Sexy time for Meg 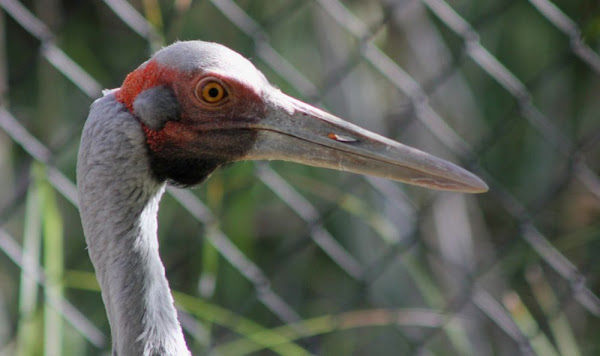 Territory and Municipal Services have the lovely news that a second brolga has been procured to service “Meg” as part of a planned breeding program.

Tidbinbilla’s resident female Brolga has received a mate for life with the arrival of a male Brolga from Adelaide Zoo.

The Brolga is a large grey bird standing up to 1.5 metres tall, has a wingspan of up to 2.4 metres and a recognisable long slender neck with an obvious red patch extending from the bill to around the rear of the head.

“Brolgas were once a common species with large flocks regularly seen across the region. However they were hunted to the verge of extinction by the late 1800s,” General Manager for Tidbinbilla, Stephen Alegria, said today. “With only two confirmed sightings in the 20th century and none so far this century, the Brolga is sadly considered extinct in the ACT.

“In an effort to increase the Brolga population, Tidbinbilla Nature Reserve will participate in a nation-wide captive breeding program. Since August last year we have had a female Brolga (Meg) at Tidbinbilla waiting patiently for her mate. Nine months on, we are now very pleased to announce that a male Brolga from Adelaide Zoo has arrived at Tidbinbilla and has settled into his new surroundings.

So what should the new male be called?

6 Responses to A new brolga for Tidbinbilla. Sexy time for Meg
Filter
Showing only Website comments

Tidbinbilla’s resident female Brolga has received a mate for life with the arrival of a male Brolga from Adelaide Zoo.

Forced marriage, I thought that was frowned on?

He should be named “Mog” of course…

I propose Brock.
Because it represents the hope and tragedy of the modern bogan, and sounds like the kind of name a Meg would look for in a mate.

He should be called Kev. It just seems to go with Meg, no real reason.

Margaret Freemantle - 29 minutes ago
Colette Robinson and bells!! View
Colette Robinson - 4 hours ago
As both a pedestrian and cyclist on shared paths, I am so sick of the arrogance, double standards and behaviour of certain cy... View
Peter Major - 4 hours ago
get then off the road would be progress View
Property 31

Carly Maree - 2 hours ago
I love how people act surprised when this city has some of the worst crime I’ve ever encountered? I lived in Sydney for 8 y... View
theroundone - 13 hours ago
Who's getting punished, though, asides from law abiding rates payers in this city? A racial or sexist epithet is treated more... View
News 1

HiddenDragon - 5 hours ago
The report aired on ABC Canberra news tonight about the devastating impact of the hailstorm on important crop resilience rese... View
News 12