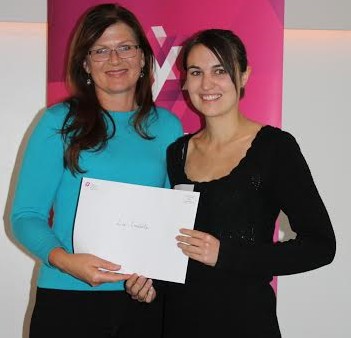 Soapbox this month received a Great Ydeas Small Grant from YWCA Canberra, which is a grant of up to $2000 for pursuing creative projects that benefit the community.

“I wrote the grant for a weekly radio show called Soapbox that I originally started when I joined a group called Young Folk Media at 2XX, which is for people under 25 to learn how to make media and get on the radio for the first time,” Lee, who moved to Canberra in 2009 to study at ANU, says.

“I interview people from the Canberra community about their passions – which is usually related to social justice or the environment – and how they’re causing positive change. It’s a platform for these people to talk about what they do and why they do it.

Lee’s interviewees have ranged from primary school students working on environmental projects and advocates for women in media to organisations rescuing food for supermarket waste. The show is broadcast on Sunday afternoons on 2XX FM (98.3 FM), but she’d also like to eventually make the program available as a podcast too.

“I do the interviews at the studios where possible and pre-record the show rather than doing it live. The first question that I ask is what gets them on their soapbox. What are they passionate about? What gets them going?”

She says the grant will allow her to pay the access fees required to put her program to air, as well as fund her attendance at a media training camp in Melbourne.

“I decided to apply for the grant because it’s only a small amount of money. It’s a little push in the right direction and enough funding for a few extra resources to get going. Also, the YWCA’s focus and objectives are aligned with the radio program, as well as my own values,” she says.

Looking forward, Lee says she’d like to eventually either work in media communications or in outreach.

“My main science interest is communicating environmental issues and climate science. There’s a big communications gap and also the potential to make a big positive difference in those areas, but I’ll always have an active interest in social justice issues too.”

Valerie Foster - 31 seconds ago
Get much further down in block sizes it will just be terrace houses no gardens. View
Steve Ulr - 54 seconds ago
Lol. Shoebox blocks are prevalent as it is. I dont think so. View
Donna N Brian White - 1 minute ago
Lori J Tas these couples have worked hard to buy their house they have probably raised all their kids in this house why shoul... View
Public Sector 3

chewy14 - 40 minutes ago
Capital Retro, You've missed the point. The idea of collocating the charging points at the PV/Battery sites is for efficiency... View
Capital Retro - 2 hours ago
What about the 100% renewables/emissions free government buys up all the abandoned service stations in the territory and conv... View
Food & Wine 12

Kevin Hodder - 9 hours ago
Rent, rates, stamp duty, taxes, work cover compliance ect and every thing else the act gov stings you! just so you can open t... View
Acton - 12 hours ago
Another stunning achievement for the incompetent Greens/Labor ACT government. Along with the highest rates increases, the lon... View
Property 6

Matthew Beale - 10 hours ago
Sarah Young sadly it comes down to being able to buy in only very outer suburbs, if you have a deposit. It is a seller's mark... View
Sarah Young - 10 hours ago
Robert Chisholm it’s crazy, I think they should do a 1 house rule at the moment, I read something last week about buying an... View
Robert Chisholm - 12 hours ago
Are the ones winning the auctions developers, property portfolio holders using the equity on their other properties or what.... View
What's On 1

Queanbeyan has been called many things over the years, but when the ABC Canberra team lobbed into town on Tuesday...
Opinion 43

Not that long ago, my partner and I were part of the teeming masses of young people trying to get...
Motoring 38

@The_RiotACT @The_RiotACT
Zoya Patel asks whether it's time we sacrificed big blocks in favour of a fairer use of land across the city https://t.co/RNR2DbGIl3 (1 hour ago)

@The_RiotACT @The_RiotACT
Sounds from the Suburbs, indie pop and Romantic Notions - check out what's on in #Canberra this week with our #GigGuide https://t.co/Q17cR5CkAy (10 hours ago)

@The_RiotACT @The_RiotACT
As the art world begins to rear its head again after COVID-19, exhibitions are back on. Catch Belco Arts' latest exhibition featuring two young artists https://t.co/j5T4N9j2Qj (11 hours ago)