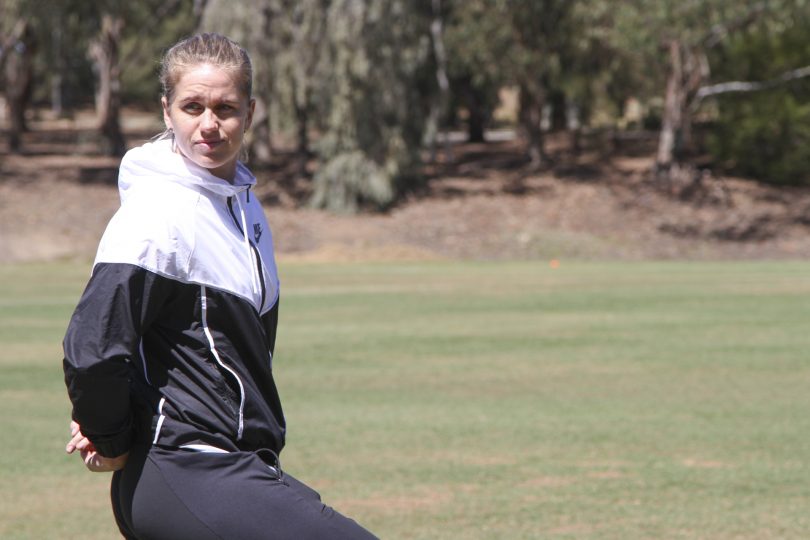 New recruit Elise Thorsnes arrived in Canberra on Wednesday and is expected to line up against the Newcastle Jets this weekend. Photos: Dominic Giannini.

Coach Heather Garriock hopes the international striker will give Canberra a much-needed boost in attack after only recording a single goal against Melbourne City on Saturday.

Thorsnes has played for Norway 121 times, including in three world cups, and found the net 10 times last season with Norwegian club LSK Kvinner, including one in the team’s cup final win last weekend.

Thorsnes is expected to sideline the jetlag and hit the ground running this week. 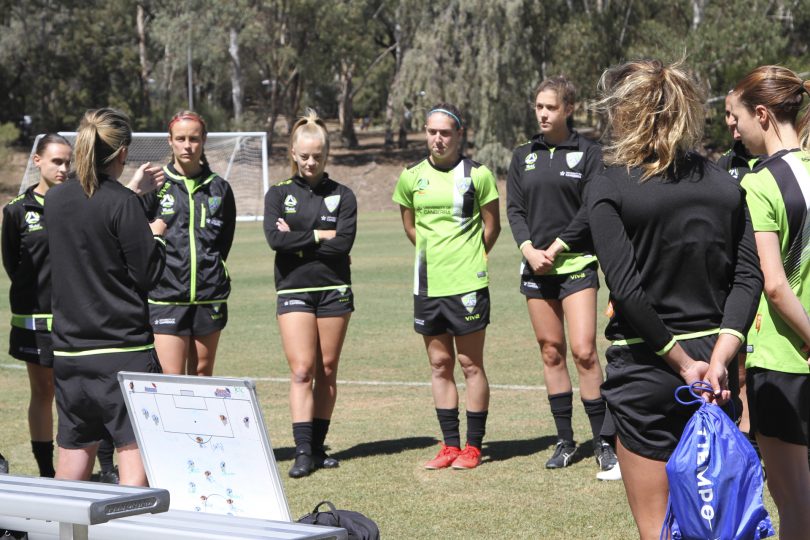 Coach Heather Garriock prepares her team for a tough game in Newcastle this weekend.

“She’s a professional and I’d expect that she will be up for the game on the weekend, as a professional, a couple of days in your legs, couple days training and I’m sure she’ll be fine,” Garriock said.

“Her confidence is only going to breed more confidence in our Canberra United squad. I know what she’s capable of.”

Co-captain Karly Roestbakken says although the team got off to a rough start on Sunday, there are a lot of positives to take from the match.

“The loss, it got to us a little bit, but obviously Melbourne City is a good team and we did actually put a good performance together,” she said. 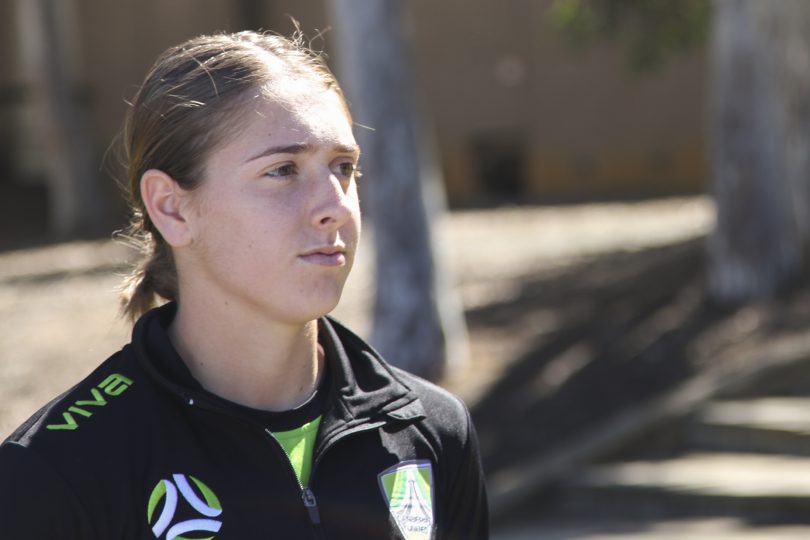 Co-captain Karly Roestbakken says the team is preparing to go out extra hard and fight for the win this weekend.

Recent recruit Emma Stanbury is expecting an extra tough outing this weekend, taking to the field against her former club for the first time since moving to Canberra at the start of the season.

“It’s going to be weird walking out in the stadium and knowing I’m not going out in [Newcastle] colours but I’m excited to be going out in green and I’m looking forward to taking it to them,” she said.

It’ll be an emotional weekend for Stanbury, who will be playing only hours away from her hometown of Coopernook, where her family has spent the last few weeks fighting to keep their homes safe from the bushfires raging across NSW. 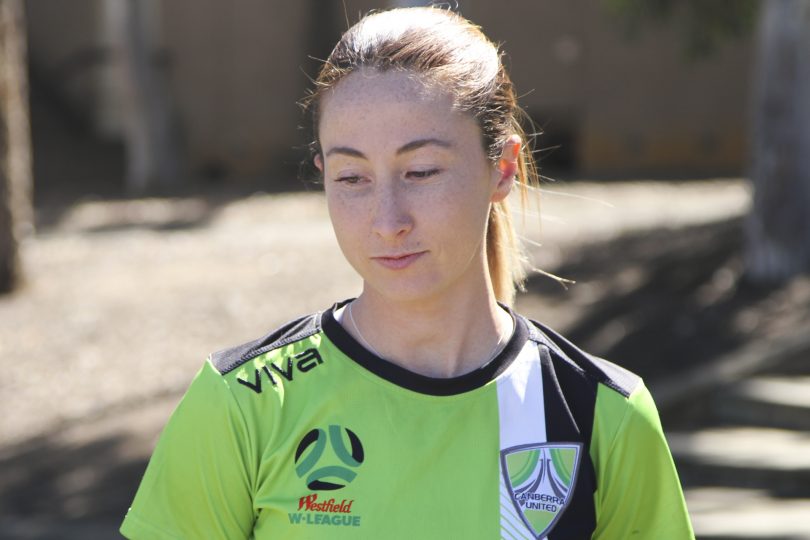 Former Newcastle Jet’s midfielder Emma Stanbury says it will be an emotional weekend against her old club.

“I’ve got a lot of family coming down from Taree, Rainbow Flat and all the areas that were affected to watch and support the girls, so it’s going to be a bit emotional, but I’ll use that to the best of my ability to put it onto the pitch,” she said.

Newcastle is expected to put on a solid defensive display that is sure to frustrate as former United players Hannah Brewer and Nicki Flannery prepare to line up against their old club.

The key this week will be patience, says Garriock.

“We know the kind of side [Newcastle Jets coach] Craig Deans puts out, it’s very defensively disciplined and it’s going to be very hard to break them down. I think it’s a matter for us to try and break it down and be patient,” she says.

There are also key players the United will be certain to keep an eye on.

“Tara Andrews upfront is really experienced. She holds the ball up really, really well and at the back, you have Hannah Brewer who used to play for Canberra United. She’s very tenacious and a winner. I think the culture amongst their squad is outstanding.” 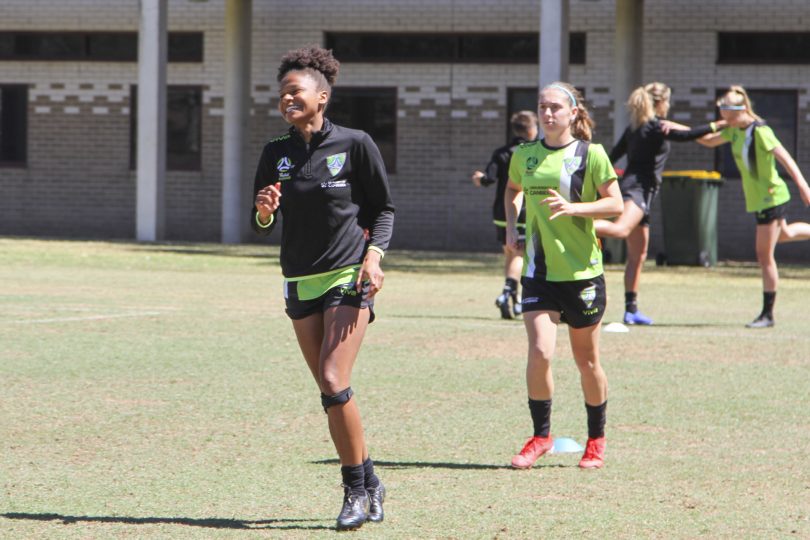 Forward Simone Charley is looking to find the net again after scoring two goals in the opening round against Perth.

“We’ve got speed all around the park. I think it’s going to be like for like, a really good battle but it’s really important we prepare and we finish off our chances. We’ve got some firepower up front, so it’s going to be sensational.”

Canberra United take on the Newcastle Jets at McDonald Jones Stadium in Newcastle this Saturday at 4:30 pm. More information and tickets are available from the W-League.