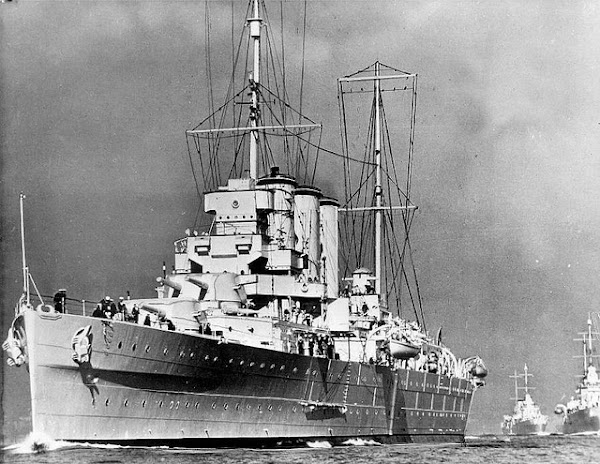 The all seeing eye scours the internet for mentions of Canberra which means I occasionally get alerted to Canberra bombers, the SS Canberra, and if I’m very lucky like today, photographs of the mighty HMAS Canberra.

For those unfamiliar with it HMAS Canberra was lost fighting the Imperial Japanese Navy on 8 August 1942 at the Battle of Savo Island. In honour of her memory the USS Canberra was the only ship in the long history of the United States Navy to be named after a foreign capital.

But there’s another funny link. Canberra musician Fred Smith wrote a song some years ago about his time in the Solomon Islands with a big shoutout to the ghosts of Ironbottom Sound which the Canberra makes up a large part.

I’ll also add that the absence of VC awards in the RAN is a bloody national disgrace.

Eighteen year old Teddy Sheean strapped himself into his Oerlikon gun and fired continuously on the Japanese planes that were shooting up mates, even while the water was closing over him. Greater love hath no man…

That such gallantry could go unrecognised leaves me speechless. At least the RAN is looking after their own, in the naming of the Collins class subs.

I think Captain Duncan Stevens would disprove that theory.

Much as I’d like to agree with JB, I had the same thought upon reading his comment. Not all captains are worthy of their ships.

Still, JB was speaking of blokes like Hec Waller, Robert Rankin and (in the RN) Edward Fegen, skipper of the Jervis Bay. Some of the bravest men ever to tread a deck, with a degree of courage, honour and determination that is almost impossible to imagine. Those men are worthy of our respect.

Q. What’s the fastest way off a sinking Italian cruise ship?
A. Follow the captain.

He was only leading by example!

Q. What’s the fastest way off a sinking Italian cruise ship?
A. Follow the captain.

I think Captain Duncan Stevens would disprove that theory.

Except Captain Joseph Burnett. Of course he probably didn’t choose to go down with his, but I suspect he would have if given the option. He sure wouldn’t want to make it back to shore.

Waller’s best moments were running the scrap iron flotilla and humiliating the Italians for mine.

Well, I’m impressed. You must’ve read the right books at some stage. 🙂

Waller has long been one of my heroes. An intelligent, forthright and courageous man who did his duty to the very end. He was an actual hero, not a soi-disant hero like the actors and sportsmen of todays tabloid media.

I agree that his days in the Med were something special. Andrew Cunningham called him “…one of the greatest captains ever to have sailed the seas…” or something similar during that period. But I can never read about the Perth’s final hours without getting a little weepy.

And those British pre-war cruisers were so beautiful.

Well Cunningham was as close to the greatest man whoever lived as we’re likely to see this side of Revelations.

Perth sunk more japanese tonnage by getting them to torpedo their own ships than her own guns in those miserable hours of darkness in Sunda Strait.

But an intercept try is worth the full money so I guess we can’t complain. The morning after our light cruiser was in the Japanese newspapers as “an unknown battleship”.

I think quite a lot of people are aware of the loss of HMAS Sydney off the coast of WA, but few would know of the loss of the Canberra, or of the magnificent gallantry displayed by Hec Waller and the crew of the Perth in the Sunda Strait.

Waller’s best moments were running the scrap iron flotilla and humiliating the Italians for mine.

chewy14 - 7 hours ago
Capital Retro, Firstly, most of the interest rate cuts happened well before the current crisis, so you can't just claim your... View
Brenton Higgins - 8 hours ago
Joshua we’ve had two elections on that already. Canberra decided. View
Jayne Denise - 8 hours ago
Sean Bishop I am a reformed anti-tramer. Northborne is so good now with less cars and less buses. 👌Coincidentally, I work... View
Opinion 7

@The_RiotACT @The_RiotACT
High-country hero David “Spike” Milliken has been recognised for decades of service in the final of the 2020 Rotary NSW Emergency Services Community Awards https://t.co/Y3fQFYqnTu (1 hour ago)