A ride in Australia’s most majestic taxi: the Governor-General’s Rolls-Royce 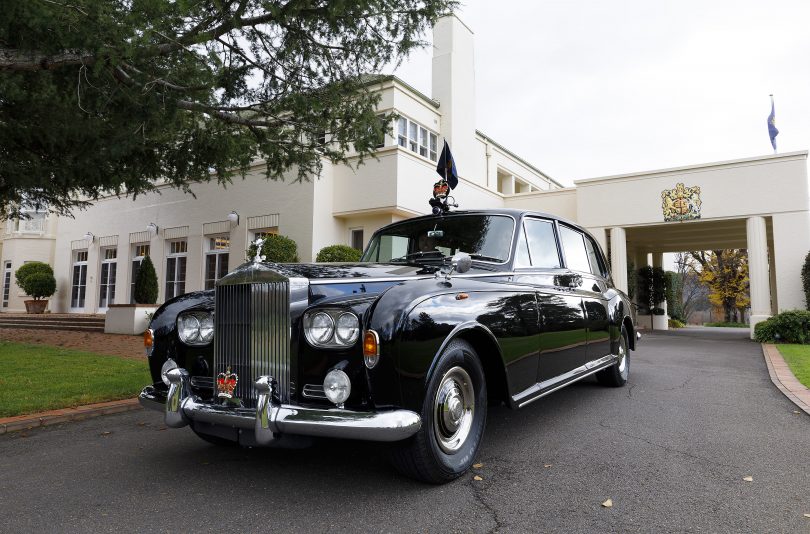 Governor-General David Hurley visited Duntroon military college on the morning of 12 June, 2021, for the Queen’s Birthday Parade. The guns were fired, the Honours List was published, and as a nation we celebrated the official birthday of Her Majesty with a long weekend.

But in all this, we can’t gloss over the car the Governor-General and Mrs Hurley arrived in for the occasion.

Prime Minister Scott Morrison may be chauffeured around in a fully armoured BMW 7 Series, but the best of the best is saved for the Queen’s representative. No other car gathers as many ‘oohs and aahs’ quite like a sparkling black Rolls-Royce.

The 1970 Phantom VI is one of only two in government use in Australia. The other is a dark-blue model acquired by the Office of the Governor in Queensland.

It emerges from behind the gates at Government House in Yarralumla for ceremonial occasions, such as the swearing in of a new Governor-General, the opening of parliament, or the Queen’s Birthday Parade. Other uses include chauffeuring foreign diplomats to and from Government House. 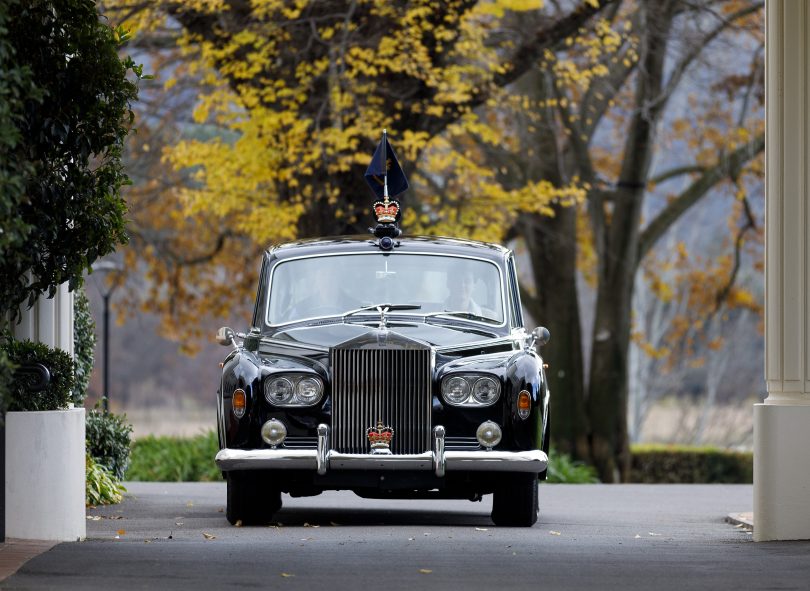 Pulling up to the state entrance of Government House. Photo: Supplied.

There is also usually a Government House open day every year where members of the public have the opportunity to get up close to it, although COVID-19 has curtailed these for the moment.

So to get a closer look at this regal Uber, I’ve been invited to the grounds for a little private tour.

The Rolls-Royce lives in a converted stable on the grounds of Government House, alongside a Holden Caprice and several pushbikes. Waking it up is similar to waking up your grandfather – there’s some coughing and throat-clearing, and the odd fart. But soon enough graceful poise is resumed and it’s rolling out into the daylight.

And what a beast it is.

Norm Dunn has been here nearly as long as the car itself, initially working as one of two full-time drivers, but now filling more of a stand-in role. He talks me through it.

A total of 371 Phantom VIs were hand-built by Rolls-Royce, with the bodywork and interior done by Mulliner Park Ward in London – each one taking about two years to complete. All up, it measures close to six metres long and weighs nearly three tonnes. 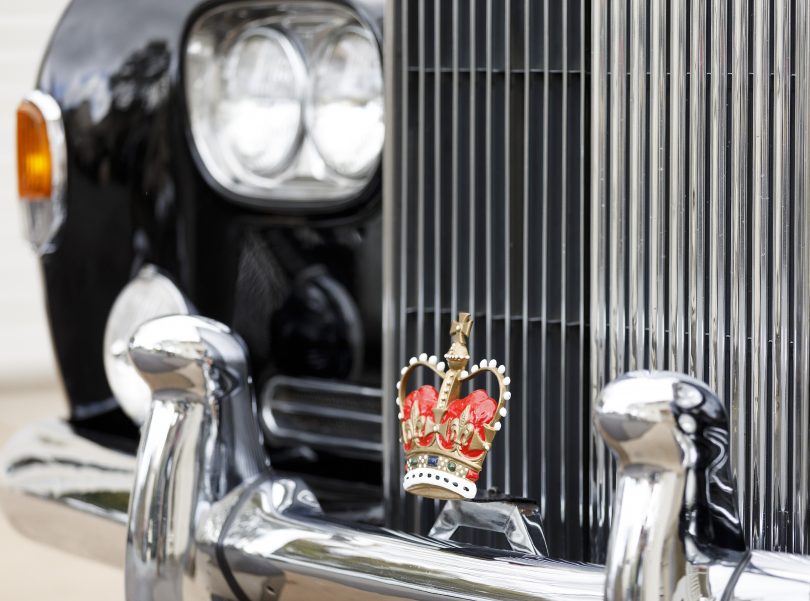 Beneath the signature Rolls-Royce ‘Spirit of Ecstacy’ mascot and hefty bonnet sits a 6.2-litre V8 engine, although Rolls-Royce prefers we call it ‘two banks of four’. This engine is coupled to a four-speed automatic gearbox.

Leather, wood and plush carpet dominate the interior, along with other luxuries such as a small drinks cabinet, silk blinds on all the windows, and a sliding glass partition behind the driver so you can comment on his combover without him hearing. It’s a veritable living room on wheels.

Norm also points out the folding dickey seats, although adds they’re probably best reserved for corgis given the size.

And, yes, the Queen herself has sat back here on her occasional visits to Canberra. A blue light on the roof marks whenever Her Majesty is inside, otherwise it’s just the three flags on the front and two brass hand-painted crown motifs front and back for the Governor-General.

When it comes time for routine maintenance, it’s driven to Moss Vale to a mechanic who specialises in old Rolls-Royces. Even with the crowns removed and normal ACT plates screwed in their place, Norm says there have been several near-misses en route from overtakers trying to wave and gawk. 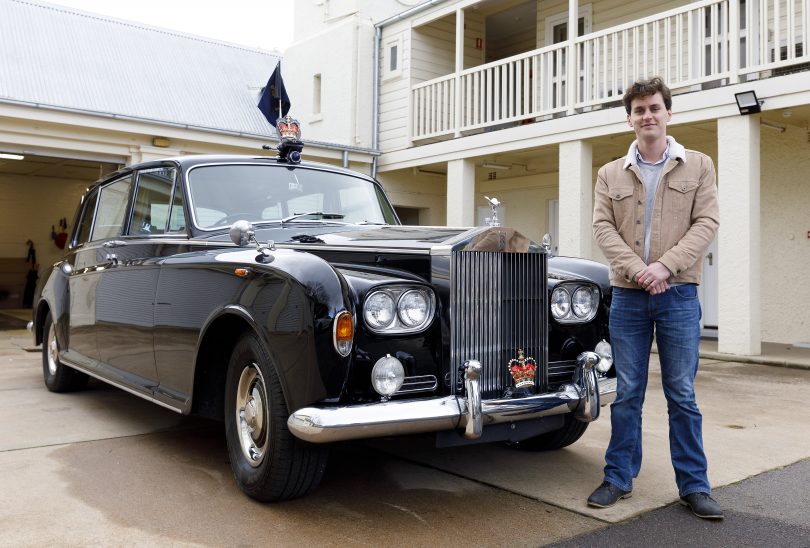 The Rolls-Royce Phantom VI outside the converted stable, and James Coleman pretending it’s his. Photo: Supplied.

Now that it’s warmed up and firing on all cylinders, we waft about the grounds in it, and never – on this side of the world at least – has a car suited its surroundings more.

As for its future, Norm tells me Government House used to own two Phantom VIs but the cost of maintenance pushed one out. Despite the royal connection, it’s still classified as a government car and as such its fate was no more auspicious than that of any other government car: it was sold on a Pickles auction lot.

From here, it could be onto anything from a quiet life in a collector’s shed to an off-road, cross-county rally.

Certainly that was the case for one of the Federal Government Rolls-Royces in 1995, which was sold to a Sydney doctor. He went on to do what you’d expect anyone to do with a classic Rolls and entered it in the 1997 Peking to Paris challenge, where it came to be known as ‘Lizzie’s Taxi’. It did finish and Australia came in fourth place.

But here’s hoping this beautiful beast holds its current job for a long while yet.

3 Responses to A ride in Australia’s most majestic taxi: the Governor-General’s Rolls-Royce
Filter
Showing only Website comments

“Waking up your grandfather …” that sentence made me laugh out loud 🙂

James Coleman – great read for a Sunday morning, thank you.

My last ride in the Rolls was very smooth and comfortable, except for the corgis nipping at my heels ~~~royal wave~~~

I was there at Duntroon, along with almost all of the rest of the Duntroon Guides. ? The chaps in red and blue striped blazers.

If you were there you will remember it until you cark! It was feezing IE <4C and windy. I had ommitted bringing gloves.

tfx1 - 29 minutes ago
The survey/census could have been more appropriately designed by asking users of government services as to how government bur... View
News 14

chewy14 - 1 hour ago
Ricketyclik, That is a grossly simplistic viewing of what happened and anyone calling this close to "attempted murder" is bli... View
ricketyclik - 2 hours ago
You must be watching a different video than the one I'm seeing gooterz. In the one I'm looking at, the cyclists indicate righ... View
gooterz - 3 hours ago
So the cyclist who was in the cycle lane. Swept across to the right hand side, then decided to take up the middle lane. The c... View
News 14

bj_ACT - 2 hours ago
It’s a fair point Heavs. The issue is that sites and land zoned for an activity such as sports facility are being switched... View
kenbehrens - 2 hours ago
The proposed Tuggeranong facility is for twin Olympic size rinks and capacity for 2,000 spectators, which I'd guess would be... View
Heavs - 3 hours ago
Because it's a privately run facility. Same as the Pitch and Putt was. Same as the basketball stadium was.... View
News 1

Finagen_Freeman - 2 hours ago
ANU cop out? What’s a fire or virus got to do with publishing how they determine fat cat salaries?... View
News 36

Scottie Zuxkerberg - 3 hours ago
Lovely in theory, but then so too is socialism and all that brings is misery and shared poverty.. This too will be exploited... View
News 26

jwinston - 4 hours ago
According to literature I’ve read electric vehicle charging stations take about 20 minutes to charge to 50%, 40 minutes to... View
chewy14 - 4 hours ago
Capital Retro, What are you on about now? I'm against subsidies where they aren't needed or make no long term economic sense.... View
MERC600 - 5 hours ago
""Have you looked at a map of chargers recently?"" Thanks for the info. Have not had much luck. Could you put up the site pls... View
Community 41

Andrew Shaun - 9 hours ago
And just like that, the builders in Canberra put up their prices again. View
thehutch - 9 hours ago
Yes, we should remove all regulation because it costs money. That should be the key factor when making decisions in an indust... View
Debbie Maz - 11 hours ago
Perhaps a review of the contract for sale T&Cs and the ‘cookie cutter’ conveyance practices next. View
show more show less
*Results are based on activity within last 7 days

The heart of Queanbeyan will be transformed into a landmark housing, retail and entertainment precinct by Canberra developer Village Building...
Public Sector 1

The days of nine to five, five days a week at the office are over for ACT Government public servants...
Breaking 3

It's official! Kokomo's in Civic will reopen as Wilma for the first time tonight (3 December). Described as a "progressive...
*Results are based on activity within last 7 days

@the_riotact @The_RiotACT
It's the story of the #summer so far - a few days of sun and then a #bucketing. And so it is for the next three days, according to the @BOM_ACT https://t.co/LeuRBSLIjr (1 hour ago)

@the_riotact @The_RiotACT
The #Molonglo Valley community finally has some clarity on the planned Molonglo Group Centre with the release of the updated concept plan by the ACT Government https://t.co/X8Mqi20Zfc (4 hours ago)