A strange first birthday for the Canberra Musicians Club 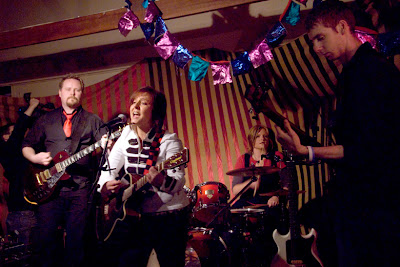 Image: The Glaciers rocking out

It was a variable first birthday for the Canberra Musicians Club on Saturday night.

The new venue of McGregor Hall (Corner of Marcus Clarke and Barry Drive in the city) has a lot going for it.

Unusually for a hall it has a high gabled ceiling which does wonders for the sound (at least compared to long, low ceilings).

The set up was good with lots of space for the bar and gear room for the bands.

And the bands brought the excellence we’ve almost come to take for granted on the local music scene.

On the down side, it’s a really big room. So a crowd that would have made The Front or Phoenix seem packed were a little sparse when spread across the wider landscape. Howling arctic weather probably kept some punters home on the night too.

Worse yet a city location brings city problems. I had left around 1am but there was trouble with large gatecrashers later, which saw a club member (who was also an off-duty police officer) hospitalised with what one witness described as “A head exploded like a pumpkin”.

(Cat scans have shown no serious damage and once the bruising goes down and the stitches are out he should be as good as new.)

RiotACT has contacted the CMC for comment and will publish it when we receive it, but we understand that an unfortunately needed upgrade of security is now planned.

It would be a very great shame if thugs are able to drive music out of the city centre.

(Slideshow of the bands below, all photographs courtesy of the wonderful ‘Pling)

twas a luvly nite. Mostly.
a big brolly for the smokers wouldve saved some wetness.
an extra 100 peeps wouldve made it cosy pretty- unlucky with the weather!

and some happy snaps of the thugs shouldnt have been to hard to come by, in lieu of some CMC community intervention.

Many thanks to the CMC for putting on the event!

Looking forward to performing here more – the crowd was great (although it did seem a bit “thin”, the hall certainly could hold many more) and the acoustics were wonderful. I did feel a bit cramped on stage, but I think that could be alleviated by moving the PA speakers/gear forward or to the right off the stage, or onto stands, and some nicer stage lighting would have been cool (i think I may be able to supply, if required).

Happy Birthday, CMC! Very sad to hear about the biff, hope that brave soul is OK.

Keith Cheetham - 18 minutes ago
Pork barreling at its best as Labor does. And then dont initialise it. View
Bronwyn Wilson - 6 hours ago
Where are e teacher librarians going to come from? There are very, very few in the ACT - that’s why so many schools don’t... View
Chris Cross - 6 hours ago
Layla Barry almost $1 TRILLION and counting, courtesy of Federal Liberals, who almost scared the nation into recession with t... View
ACT Election 19

Glory Hammer - 19 minutes ago
Vicki Herbert, have you noticed that some of the candidates don't even know how to spell Yerrabi?! Not naming names, but if a... View
Glory Hammer - 21 minutes ago
Evan Hawke, your comments appear to have set up a north vs south debate, when this isn't the intent of the article. Peter Elf... View
Evan Hawke - 38 minutes ago
Darron Marks Totally agree, there is a need to build more schools in Gungahlin as most of them are at capacity. The reason th... View
News 26

Lisa Norrie - 7 hours ago
Small minded people with sfa to do maybe take up a hobby get a full time job focus on your family there’s millions of thing... View
Toni Higgins - 22 hours ago
Shame facebook cant b used for good only instead people like to b nasty and put people down all the time.wonder if they would... View
Property 8

Jess Peil - 23 hours ago
This is so exciting! View
Roland De Saxe - 1 day ago
Great idea for Eden area View
Talla Mc Bogan - 1 day ago
happened in the otways ,, mountain bikes took the moto tracks ,, they only use a small area though ,, so plenty of moto track... View
Opinion 32