A thank you to emergency services workers 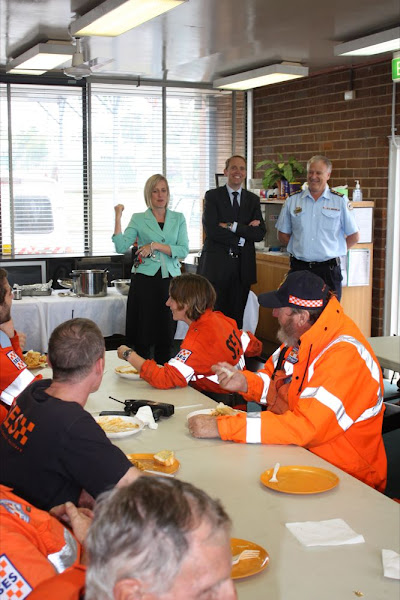 Simon Corbell has issued a thank you to all the emergency services workers who put in the hard yards through the recent rain event.

“Our Emergency Services Agency (ESA) workers and volunteers have worked tirelessly since the rain started mid-last week, and have once again put their own families and safety on hold to help others in need and for this I pass on the government’s sincerest thanks for a job well done,” Mr Corbell said.

“It is never an easy task working in extreme weather situations, and situations where it can require climbing onto roofs or buildings in wet and slippery conditions, but the SES and other supporting agencies have performed a professional and first class job in trying circumstances.”

Since last Tuesday when the rain began in the ACT, the ACT State Emergency Service (ACT SES) has responded to 941 calls for assistance from members of the community.

Jobs ranged from fallen trees, dealing with minor flooding and closed roadways and roof and property repairs from rain inundation.

“Without these important and valuable teams of workers from SES and RFS, the ACT would be in a much worse situation and their willingness to drop their own personal lives to help others does not go un-noticed,” Mr Corbell said.

“A thank you should also be given to the families and employers around the ACT who allow these volunteers to perform their important work, because without their support, teams of SES volunteers could not be formed.

I think a big bouquet is also due to the ACT Government as a whole which provided an excellent response, and fantastic communications.

A tree fell across Majura Avenue at 5:30am on Sunday morning. I called Canberra Connect and the firies arrived about 5 minutes later and had it cleared in 20.

In the 5 minute gap only two speeding cards not paying attention hit it!

Gotta say the coordination of responses across the weekend seems to be working remarkably well.

Thank you to all of the SES and RFS volunteers for your great work.

It’s a bit sad that a post about bad drivers can generate 60+ comments in no time, yet a tribute to these selfless community minded volunteers manages just 3 posts in 5 hours. I bet if ESA stuffed up this emergency response there would be 60 + posts by now.

great comment – thanks. it’s been a long weekend for all involved! Let’s hope the rain holds off now. One general comment though: please take the time during events like this to educate your kids/teenagers about floodwaters and about what our environment is capable of. At Queanbeyan – you can view the swollen river at a safe distance to see how fast the water actually runs etc. Saw a few incidents of pure stupidity and don’t want to see any more!

Awesome job yet again boys and girls – the fair city of Canberra salutes you!

Shift changes took place at individual depots at around 1800 in the afternoon or 0600 in the morning.

Over all there was 941 calls for assistance and as of Sunday night at around 2300 there were about 30 still unattended. These would have been done yesterday.

Well done all round I would say.

It’s a bit sad that a post about bad drivers can generate 60+ comments in no time, yet a tribute to these selfless community minded volunteers manages just 3 posts in 5 hours.

True. You prompted me to not log in later to post as I intended, and then probably forget.
So I add my thanks!

I saw them out and about in weather that made me whinge about having to walk to and from the car on the weekend. A big thanks from me too! Also to the people manning the phones round the clock. I think lots of people don’t realise just how many people work behind the scenes to make sure the eternal whingers of this world won’t have to complain about closed roads forever.

Thank you to all of the SES and RFS volunteers for your great work.

It’s a bit sad that a post about bad drivers can generate 60+ comments in no time, yet a tribute to these selfless community minded volunteers manages just 3 posts in 5 hours. I bet if ESA stuffed up this emergency response there would be 60 + posts by now.

I’ve been cropped in this photo! But would like to say, a good effort by every single SES, RFS, ACTFB, aswell as those behind the IMT, and those behind any other organisation over the past week!

I’d like to make sure the crews out repairing potholes get a good thank you. While they would have been being paid, I didn’t envy them in the slightest when I passed them patching a hole on the Barton Highway in driving rain at 22:30 on Saturday night.

I’d also like to pass on my thanks to all ESA personnel. A very good job.

Julie Macklin - 4 minutes ago
James Dof And no one has ever expected trades people to cycle from job to job with their tools. That is just a straw man argu... View
Heather Grant - 2 hours ago
Suggest they hire extras from Deane's and Keir's (and anywhere else close by that have spare buses for hire). Instead of look... View
Ashley Wright - 6 hours ago
Cary Elliot Johnson do you have an example of such a city but when defining decent? define it from a daily users point of vie... View
Opinion 47

Amanda Evans - 3 hours ago
Good idea, but what about all the other businesses that suffered because no one was around because of the smoke? View
Adele Craven - 14 hours ago
More effective for workers and patrons would be doing more to reduce vehicle emissions View
Lisa Logue - 19 hours ago
I feel sorry for the staff expected to work outdoors in hazardous air quality. View
News 63

@The_RiotACT @The_RiotACT
Have you seen #Moruya's Stumpy family and their tribute to emergency services personnel and volunteer firefighters? Here's the full story https://t.co/yZxyiWykBz (47 minutes ago)