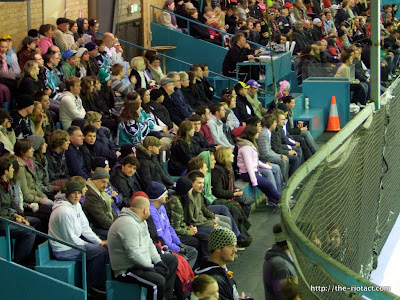 On Saturday night I was invited to check out the last Canberra Knights home game of the season.

I’d been advised there’d be two tickets waiting at the ticket office and that if I wanted a good seat I’d need to turn up around 4.30, or just rock up at 5.30 to stand in the bar which is the only place alcohol is allowed.

A very short conference with my friend who was coming reached a strong consensus to stand in the bar.

Turning up at 5.30 we were impressed to see a queue at the ticket office. After a few short minutes our promised tickets were in our hands and for the first time in many years I was inside the Phillip ice rink. (Adult tickets cost $15 for those paying) 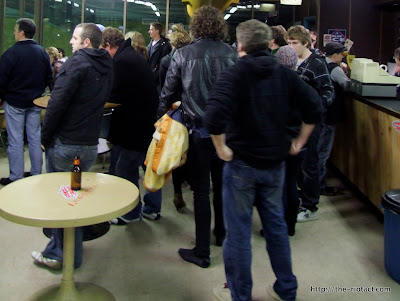 When I were a little tacker clomping around the rink, occasionally falling over, and desperately wondering how I’d get to talk to the girls in spiral perms and wham t-shirts who were whizzing around the ice, I did sometimes wonder why the parents had all disappeared to the box perched over the ice.

On Saturday night that mystery was solved when I headed up the stairs to discover the bar.

I’m pretty sure the decor has not changed since family killed time up there. It’s a real throwback to the 80s for those seeking to relive the wood veneer and formica years.

But the beer goes for $4 a throw and the view down the length of the ice is pretty good through the armoured grill. (All the seats are netted too) 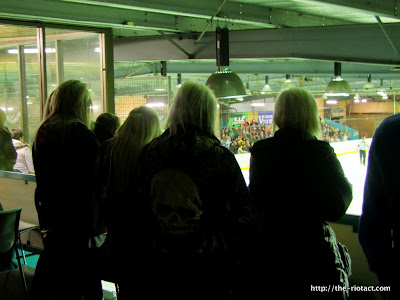 But peroxide is immortal and so are the pretty women who frequent ice rinks.

After a bit of a warm up the players lined up, the audience stood (beanies remained on heads), and Advance Australia Fair was played.

The players then departed the ice and there was a lengthy delay before play started. 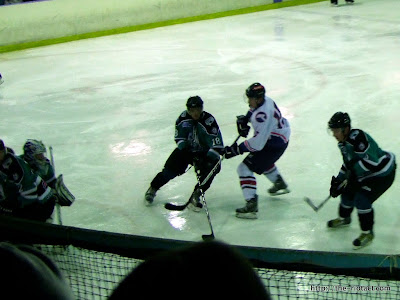 In roughly the time it took me to drink my first Carlton Draught of the night the players returned. There are some things which make ice hockey different to most games you might have been to:

— It’s played on ice so movement tends to be along curves, but very fast.
— They play three periods, not the two or four we’re more used to.
— As a North American game they like stopping the clock. We timed one of the 15 minute periods as being an actual 30 minutes.

Our men in teal, the Canberra Knights were playing the Melbourne Ice and despite playing a lot of the game at the wrong end of the rink they managed to score the first goal.

Which was when a crazy old dude threw himself at the glass and started pounding on it to indicate his approval.

It turned out he was mostly harmless but it’s an alarming spectacle from close up the first time you see it.

Beers flowed, the Knights racked up a two goal lead, the action was fast, skillful, and generally entertaining. 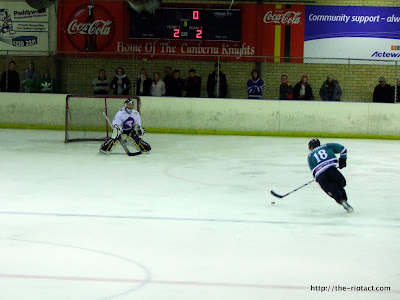 In the last period Melbourne really started to get on top of our lads and land some heavy checks on them.

They clawed the score back and as the clock ran down the teams were locked at 2-2.

The hooter went off, and no one moved to go home. We looked at each other and tried to remember how it went in the movies.

It became clear there was going to be some sort of tie-breaker which turned out to be a penalty shootout.

That was quite exciting, but sadly didn’t go our way. 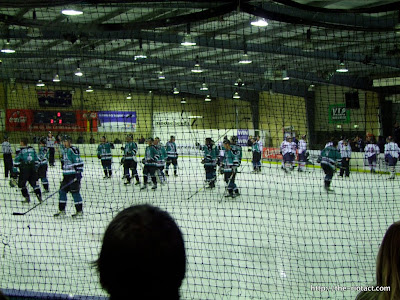 The packed crowd was a little disappointed, but still in good spirits. The players milled around.

For $15 and with very reasonably priced refreshments it’s a fun cheap way to kick off a Saturday night.

It is a top night out, great atmosphere I would much prefer to go there than go to a 3/4 emplty Canberra Stadium to watch the Raiders.

I love hockey, but if you think a Knights game beats a Raiders game for atmosphere you need your head read.

A long time ago, down in Melbourne, on a whim some friends and I went to a rink on weeknight for a skate. Turned out there was a game on .. some local Veterans match, something like that. No fee for spectators. We’d only been standing there 3 minutes before the first all-in brawl started. It was a good show.

I am a huge fan of the ice hockey and get to the local games as often as possible. I love mixing it with the mad fans at the mezzanine bar and suckin $4 VB’s. Top Value!

Anyone who’s interested in playing hockey should come to the rink for social games every Thursday night at 10pm. Great place to start before you join the league 🙂

My Mate Ken has been hassling me to have a look at a game one day.
Sounds like its a good night.

As a promotional tool, they probably should have thought about getting you the free tickets sometime before the last game of the season!

Planting the seed for next season I guess Caf!

From my time in the US, I decided pretty quickly that Ice Hockey was the most exciting/interesting game to watch compared to mindlessly boring GridIron, Baseball and/or Basketball. Ice Hockey is fast, furious and bloody exciting … the brutality is breathtaking! It seems to be me that it’s what sport really is all about in a primeval kind of way.

Nothing like a good excuse to crack out the dress beanie 🙂

Damn it! I would have loved to have watched the game.

Where was the marketing and promotion??

It is a top night out, great atmosphere I would much prefer to go there than go to a 3/4 emplty Canberra Stadium to watch the Raiders.

Linda Moore - 9 minutes ago
Jake Badger It is actually not my backyard, I just know the area - heritage weather boards, Tocumwals. Nothing like the propo... View
Jake Badger - 1 hour ago
So not in your backyard then? Not liking the proposed design doesn’t stop it being community land. View
Linda Moore - 2 hours ago
It is great that YWCA wants to build community housing, but this is not an appropriate location. Canberra has so few heritage... View
Food & Wine 19

Jaala Hamilton - 17 minutes ago
Loris Manns couldn’t agree more! View
Lisa Bishop - 2 hours ago
Inmates should be made to contribute to their keep. Get them outside building and planting out vegetable gardens etc View
Breaking 4

JessP - 2 hours ago
Went over Evatt, low and loud! View
Capital Retro - 6 hours ago
It would be nice to see some of air force planes over Tuggeranong some day but thanks for reporting it anyway. View
News 49

Oliver Raymond - 3 hours ago
On a scale of A to Z, guess where Zed comes? View
Nick Medveczky - 9 hours ago
Charles Godworth Zed is an extreme right winger who orchestrated this faction of the libs to takeover the ACT branch from whi... View
Property 154

chewy14 - 4 hours ago
The whole point is that developers have worn the costs of their proposals based on the current land use and policies in place... View
Anne O'Hara - 9 hours ago
I hope Suez is paying for all the skip bins and staff for collection points. View
News 5

JessP - 6 hours ago
Mr Pinkas said the drivers had the support of the Canberra community. Do they? Most people haven't had a pay increase this a... View
ssek - 6 hours ago
Well the union are telling lies as usual, because I've seen barely anybody supporting this extortion for unreasonable pay ris... View
Capital Retro - 7 hours ago
Collections as usual in Tuggers this morning. Truck being driven by a smiling lady. View
show more show less
*Results are based on activity within last 7 days

A few weeks ago, I drove my car across Commonwealth Avenue Bridge for the first time in months. Since the...
Property 154

UPDATED 10:45 am: The ACT has extended the Public Health Emergency for a further 90 days in response to the South...
News 11

Without consultation, a 10-year-old DA was approved in March for a 24-storey building on Borrowdale House, the old Post Office...
Food & Wine 6

Australians long ago cottoned on to the joys of Asian street food, and our multicultural make-up means we’ve got the...
*Results are based on activity within last 7 days

The superb green 16.18 hectares of pasture at LouieLou at 57 Vaughan Drive in Sutton, the residence, cottage and facilities, are possibly the...
News 51

A few weeks ago, I drove my car across Commonwealth Avenue Bridge for the first time in months. Since the...
News 40

After months of construction, City Walk has been given an injection of new life with the addition of grass areas...
Opinion 24

Of the sporting events that we no longer have in Canberra, some had a long run of many years while...
Food & Wine 19

@The_RiotACT @The_RiotACT
Organisers of country shows in southern NSW say they have a big challenge on their hands to manage COVID-safe events next year https://t.co/55uBhCWyeJ (2 hours ago)