A wintry view from Mount Stromlo 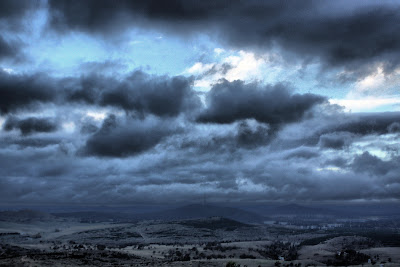 While we bask in autumnal sunshine today it’s worth remembering the taste of winter we had last week.

Pommie Bastard has sent in this picture he took from Mount Stromlo.

Got an image of Canberra to share with the world? Email it to images@the-riotact.com

Nice drama and atmospherics. I see the Canberra frosts and fogs from above, with the sun warming it all up.

+1 to all the positive comments

No worries, thanks again! I ride up Mt Stromlo all the time (I live just around the corner), so that one is like a pic of my home territory.

It would be my pleasure justbands. Unfortunately I’m at work at present, will get onto it tonight. (After 10.00 pm)

Are you able to send me a high res version too Pommy bastard? band at littlesmoke dot com, if you’re able. Ta!

Many thanks for the comments, I’m humbled.

The image was taken as a three shot HDR. There is a slight missalignment if you look closely at the lakes. (Thanks for the software advice CoffeeGeek)

It was then opened in photoshop, and the blue hue which was already predominant, was pushed further to give the saturated effect. Pushing the blue gave it a slightly grainy feel, which I liked, so I added a little “watercolour” filter to enhance that.

Thanks again to all.

PS. it peed down just after the shot was taken.

You have an amazing talent, PB – most impressed by this latest pic!

Another top pic PB! Was the pic taken using a filter or are those colours all natural? Either way, Nice!

Sure just give me a mail addy to send it to.

What an amazing picture!!

Justbands, I’ll happily send you the full sized image with would give you a much better resolution for a desktop background.

(Johnboy, can you link to fullsized images?)

Another nice shot. These pics are making great desktop backgrounds.

@The_RiotACT @The_RiotACT
Bogong moths, witchetty grubs and crickets could add more crunch to your cooking according to a @CSIRO report outlining Australia's potential in the edible insects market https://t.co/oevzIJa51X (55 minutes ago)