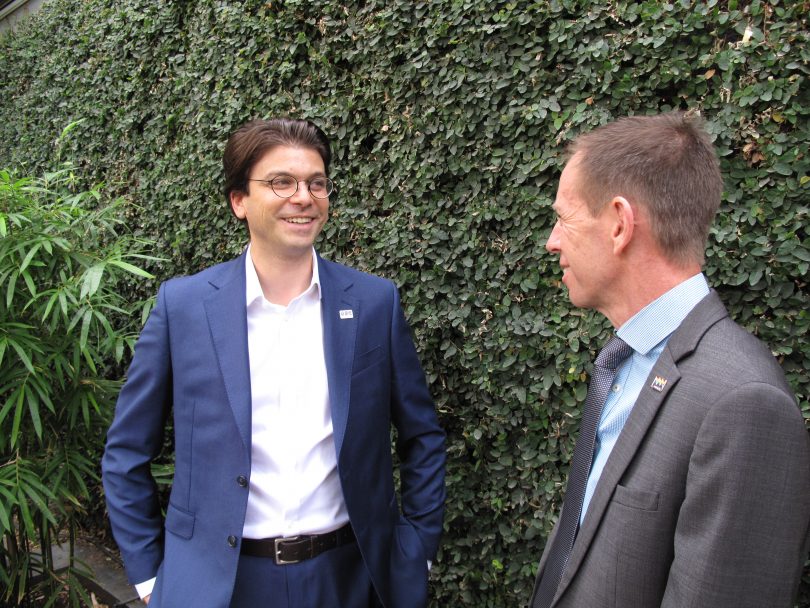 Tim Hollo and Shane Rattenbury: “This is all about recognising the existential threat climate change poses to communities across the world and we are not immune to that here in the ACT.” Photo: Supplied.

In a bid to turn up the heat on the Coalition close to Saturday’s Federal election and the incoming government, the ACT has become only the second jurisdiction in the world to accept that the world is in a climate emergency.

With the passing of Climate Change Minister and Greens leader Shane Rattenbury’s motion in the Legislative Assembly late on Thursday, the ACT joined the United Kingdom in declaring that urgent action is required across all levels of government to avert what Mr Rattenbury said was an existential threat to human life on the planet.

“This is all about recognising the existential threat climate change poses to communities across the world and we are not immune to that here in the ACT,” Mr Rattenbury said.

“This vote is all about the Assembly being clear that we are prioritising climate action and responding to the need to act with a true sense of urgency.”

Although the motion does not oblige the Government to take specific action, Mr Rattenbury said it would mean decisions would be taken in the context of a changing climate and the need to curtail emissions.

“What this should mean practically for the ACT Government and its agencies is that every decision we take should now have a climate filter across it,” he said.

“We should be asking ourselves the question, does this decision respond to the climate emergency, does it help cut emissions, does it help deal with the threat of climate change?

“And if the answer to that is not yes, then we need to stop and rethink the decisions we’re taking.”

Mr Rattenbury also believed the ACT could inspire other jurisdictions in Australia to follow suit.

“Here in the ACT I like to think we are a beacon of hope. We have demonstrated what is possible, that real climate action can be taken. I hope other jurisdictions are able to look to what we have achieved and be inspired,” he said.

Greens candidate for Canberra Tim Hollo said this Saturday would be a climate change election and if elected he would join colleagues in Parliament to move again for Australia as a whole to declare a climate emergency and ‘work as hard as we possibly can to bring down our emissions very very fast’.

Asked about climate action impacts to the Australia’s economy, Mr Hollo said there was no greater threat to the economy than the climate collapsing and that the best thing for the economy, in the short, medium and long term was to remove emissions as fast as possible.

Greens policy calls for coal industry workers to be protected during the transition away from coal.

He said the ACT demonstrated what could be achieved with Greens in the Parliament.

“That’s what we need to see at a federal level in both houses, lots of us so we can ensure the Labor Party, which has moved a long way on climate change but is not yet off the fence on coal and is still backing gas, doesn’t work with the deniers and delayers and the coal-huggers in the Coalition,” he said.

Greens Senate candidate Dr Penny Kyburz said getting an ACT Green into the Senate meant there would be a real chance that the party would hold the balance of power and be able to negotiate with a probable Labor government.

“This is the climate election. We’re in it to win it,” she said.

While polling has shown a drift away from Liberal Senator Zed Seselja, the status quo of one Labor and one Liberal in the Senate is expected to be maintained, while in the central seat of Canberra, Labor’s Alicia Payne looks to have too much of a buffer for Mr Hollo to cause an upset. Independent Anthony Pesec may be the wild card in the Senate race, running as a ‘green conservative’ alternative to Senator Seselja.

Mr Rattenbury also introduced legislation on Thursday to strengthen the ACT’s commitment to 100 per cent renewable electricity beyond 2020.

The Climate Change and Greenhouse Gas Reduction Amendment Bill will legislate for the ACT to maintain an ongoing obligation to 100 per cent renewable electricity for each year beyond the 2020 target.

The ACT is due to have electricity from 100 per cent renewable sources after the completion in October of Stage 3 of the Hornsdale wind farm in Victoria.

“This is the climate election. We’re in it to win it”??

With one seat in the House of Reps?

Stephen Saunders - 11 minutes ago
A 21st century rail link from the largest city to the capital city? Heavens, that's not how we do things in brawny Australia.... View
News 15

ACT resident - 30 minutes ago
Because a land use such as a major waste facility is allowable does not mean its appropriate for the site. CRS always told th... View
Sport 6

Bellelis Australia - 2 hours ago
Phillipa Leggo thank you. Can't wait to see you in the shop to show you around 😊 View
May Mac - 17 hours ago
The only reason we switched to landfill nappies was the struggle to keep line dried reusables from stinking of woodsmoke in w... View
Phillipa Leggo - 19 hours ago
Well done Olga Imbriano - lovely article👏👏👏 View
Food & Wine 24

Capital Retro - 11 hours ago
Australian universities are dreaming if they think Chinese students are going to come back because the leaders of China won't... View
Ol L - 17 hours ago
While the sun shined they didn’t put $ aside for a rainy day and now there crying poor. View
Community 6

The resilience of the few who have not turned on their heaters yet in 2021 will be put to the...
News 0