Last year was the ACT’s warmest on record and the driest since 1982, including a record number of days above 35 degrees and 40 degrees, according to the Bureau of Meteorology’s annual climate statement.

As the drought dragged on, rainfall was well below average, particularly in winter and spring.

Canberra’s weather reflected a national warming trend that has seen average temperatures rise by a degree since 1910.

The Bureau said that daytime maximum temperatures were well above average at all ACT sites. Canberra Airport had an annual mean maximum temperature of 22.6 degrees, the highest since records at the Airport began in 1939, surpassing the 22.0 degrees set last year. This was 2.7 degrees above the long-term average of 19.9 degrees.

Overnight minimum temperatures were the highest on record for January but close to average in other months.

Combining daytime and night-time temperatures, mean temperatures in 2019 were well above average, with Canberra Airport’s annual mean of 14.9 degrees the highest on record at that location.

The warmest day was 41.6 degrees on 16 January, Canberra’s equal third-hottest day on record. The coolest day was 14 July when the temperature topped out at 8.6 degrees. The mean daily minimum temperature for Canberra Airport was 7.1 degrees, which is 0.6 degrees above the long-term average of 6.5 degrees.

In mid-January, Canberra Airport had a record four consecutive days of 40 degrees or above from 15 to 18 January as part of a broader heatwave affecting much of Australia.

In December, another heatwave saw Canberra Airport reach 41.1 degrees on 21 December, the first time it has reached 40 degrees in Canberra in that month.

Rainfall in 2019 was well below average at all ACT sites, with most sites around 40 per cent below the long-term average.

Canberra Airport had its third-driest winter and fifth-driest spring on record, with the combined winter-spring rainfall being the third-lowest after 1982 and 1940.

Despite the warmer trend, snow fell during an AFL match at Manuka Oval, the first known instance of snowfall during a match. 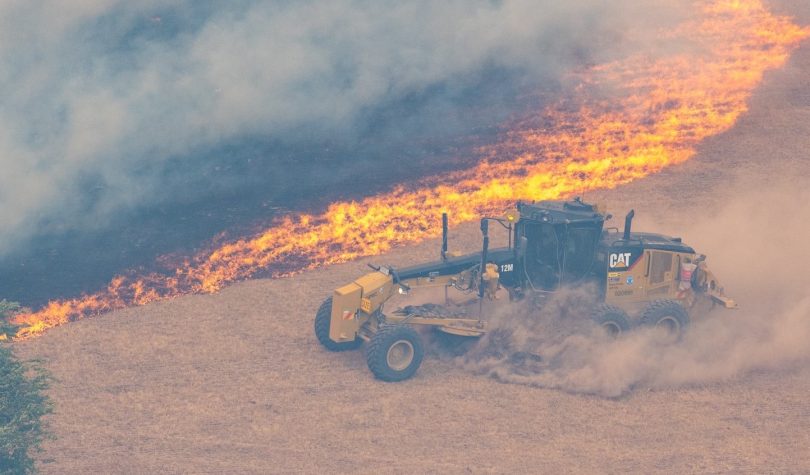 The heat and dry led to bushfires across Australia, including the North Black Range bushfire east of Canberra. Photo: NSW RFS.

Nationally, the Bureau said that for the first time Australia experienced its warmest and driest year on record, exacerbating an already parched continent and, and along with persistent high winds, feeding the nation’s bushfire crisis.

It said the changing climate had been a factor in the ongoing fire situation, with Australia warming by a degree since 1910.

Meanwhile, the national average rainfall total in 2019 was 277 mm, 60 per cent of the expected annual total and the lowest since consistent national records began in 1900. This was 11 per cent lower than the previous record low of 314 mm set during the Federation drought in 1902.

“Most of this year, Australia’s climate has been dominated by a very strong positive Indian Ocean Dipole, which acted to both warm and dry Australia’s landscape, particularly from around the middle of the year,” he said.

“We also saw the influence of a rare Sudden Stratospheric Warming event high above the south pole, which acted to push our weather systems northward and compound the warmer and drier than average conditions over southern Queensland and NSW during spring, amplifying the fire weather.

“The other key factor at play is that Australia’s climate has warmed by more than a degree since 1910, which means very warm years like 2019 are now more likely to occur, while the trend in recent decades has been for drier winter and spring seasons in the south.”

The Bureau says that in recent weeks, some of the key drivers of the recent warm and dry patterns over Australia have eased. As a result, rainfall for the coming months is expected to be average to below average in the east, while wetter than average conditions are possible for much of Western Australia and South Australia. However, temperatures are likely to remain warmer than average over the rest of summer.

“Unfortunately the outlook is not indicating a widespread return to wetter than average conditions over drought and fire-affected parts of eastern Australia. But with the likely return of the monsoon by mid-January for northern Australia, it raises the chance that we could see some periods of higher rainfall move south in the coming months,” Dr Braganza said.

Or 4th warmest on record since 1979 if you use the satellite data? Would be nice to get some clarification from BoM on that. Still hot.

Stunning heat, fires and drought. Fortunately, LibLab has got it covered, with jobs and growth.

Ah 1982/83. When Fraser called an early election, Bob Hawke was put in on the same day, Hawke won the election and a week later the drought broke and the recession ended. In 1985 Fraser talked about the drought breaking when Hawke was elected and he (Fraser) said “I didn’t have the connections up there that he had”.

Hmmm…I remember the 1982 drought. There were dead and starving sheep in the paddocks next to Cbr Ave between Qbn and Fyshwick. Zero grass – not dry grass – ZERO. Just dust.

Contrast that 2 ks up the road at some homes in the inner south, were Jo Average would be out watering his lawn all blinking day and, after mowing, chucking his grass clippings in the bin. It infuriated me.

Jackie White our dams dried up, cracks a foot wide.
The dams this year still have water.

Mary yeah I don’t know if the current drought is worse overall , but my recollection of 82 is that it was worse around the ACT than currently… though not by much! Wasn’t as hot, though there were some high 30 s days as I recall, as I puked with morning sickness ugh