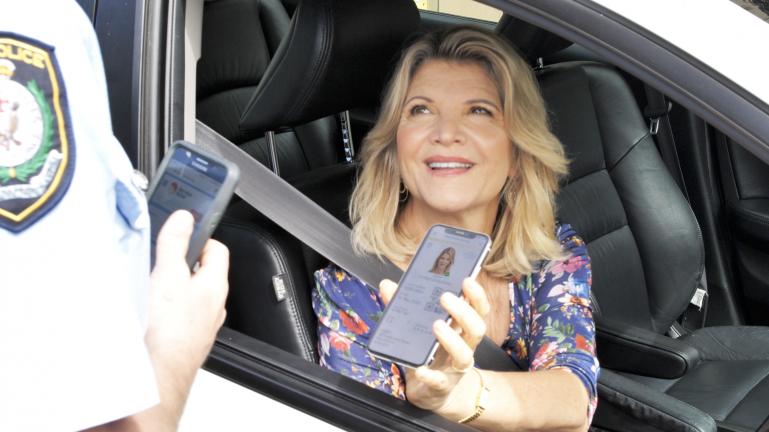 It is still a requirement to carry and produce a driver licence when asked. Photo: Supplied by Service NSW.

Motorists in the ACT may soon be able to use driver licences on their phones instead of the plastic licence as New South Wales rolls out digital driver licences next month.

As of next month, Service NSW will offer an electronic version of the plastic driver licence, made available on a smartphone or other electronic device through the Service NSW app.

A spokesperson said the ACT Government is “enthusiastic about moving to digital driver licences” in the nation’s capital and hopes to roll out the digital licences in the 2020-2021 financial year.

“We recognise driver licences serve many purposes, including proof of identity and proof of age, and we want to ensure digital licences could be used and accepted in all the same contexts that printed cards are today,” the ACT Government spokesperson said.

“We would like to design this shift with the local community and industry groups.

“The ACT Government is committed to moving the delivery of more community services online and this project is being considered for commencement in the 2020-2021 financial year.”

According to NSW laws, when requested to produce a licence, holders are not required to hand over the electronic device that is displaying the licence, but if the police officer or authorised person directs them to refresh the licence by swiping down on the screen, they must comply.

If the screen of the device on which the licence is displayed is unable to be read due to cracking, dimming, dirt or any other fault, damage or obstruction, the licence is deemed not to have been displayed, incurring a fine.

NSW electronic driver licences will be used in addition to, and will not replace, the current plastic licences. The requirement to carry and produce a driver licence when asked has also not changed.

An ACT Policing spokesperson said any questions related to the potential introduction of digital driver licences in the ACT would be a matter for Government but said the NSW rollout will not adversely affect ACT Policing.

“The upcoming rollout of the Digital Driver Licence (DDL) in New South Wales will not adversely affect how ACT Policing deals with motorists from NSW,” the spokesperson said.

“Prior to the official rollout in August, ACT Policing Traffic Operations will disseminate an information bulletin to all ACT Policing members for their awareness regarding the DDL.

“If there is any doubt regarding a driver licence status, ACT Policing members will still have access to RTA databases to validate Australian driver licences.

“As per information available on the Services NSW website, NSW drivers are encouraged to carry their plastic licence when travelling interstate, as well as ensuring their phone screen is not cracked and that their phone is sufficiently charged.”

Danielle Caesar, I wished it and it came true

What if you’re phone is flat

Monica Millgate keep your phone charged while you’re in the car, firstly, and secondly carry the physical card if that’s a problem for you.

I’ve done it already. Simply photographed both sides of my drivers licence with my mobile phone and saved the images.

Totally against this!!!!! With no imbedded security holographics, the details can be too easily changed to be deceptive.

Officer: Please show me your licence.

Driver: Sorry, my phone is flat and that is the only I'd I have!

What happens when the organisation wanting your ID says they have to photocopy your Driver’s License? It has happened plenty of times for me at car-hire places. Also the current plastic DL is accepted overseas as a valid license. Imagine trying to show it on your phone in a developing country.

It doesn’t replace a plastic licence! Why is this so hard for people to understand?

It is an option for those who want the convenience of having it electronic. But still need to have a physical one you will have it.

Heh. I thought it was illegal to even touch ones phone in a running car.

Yeah- and when you use the hands-free you also get stung for using your phone. If you challenge them, then they threaten you will a police record!!!!! Been there, done that!

Ohhh and what happens when you still use an old Nokia?

Marissa Booth you hand over your plastic drivers licence.

Fantastic! I use my phone for everything.

My husband would be stuffed as he doesn't have a mobile.

Now I have my full right to have my phone while Im driving.

For once, a good idea coming out of London Circuit.

doesn't NSW have electronic driver licenes? what has the experience been there?

Driving licences are not just for Australian use, but are used when hiring a car overseas. How would that work?

i don't own a phone, what then?

I don't want one thank you

If I don't have a smart phone or a flat battery then what?

Kieran Mackay Hahahaha is that us?

Lucy Humphreys - 3 hours ago
Jennifer Manson then I'd say tennis is not for you View
Croissant Henderson - 6 hours ago
Love means nothing to tennis people. View
Jennifer Manson - 8 hours ago
Many people do not find it entertaining at all, but rather boring, so it's good to see some fun. View
Public Sector 2