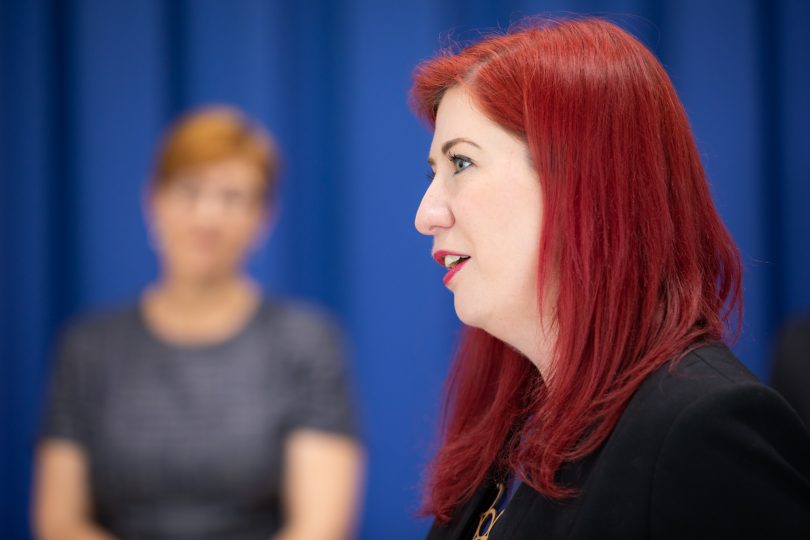 Human Rights Minister Tara Cheyne did not rule out taking the issue to the United Nations. Photo: Michelle Kroll.

Human Rights Minister Tara Cheyne said she has not ruled out going to the United Nations if the Federal Government does not act to reinstate the right of territories to legislate on voluntary assisted dying.

In a rare tripartisan motion, Ms Cheyne joined Attorney-General Shane Rattenbury and Opposition Leader Elizabeth Lee to call out the legislative inequality experienced by Canberrans compared to other Australians.

Ms Cheyne said that regardless of personal views on voluntary assisted dying, there should be no controversy about allowing each territory to legislate on the matter, calling the current limitation cruel, needless and devastating.

“Someone who is 15 minutes away across the border in Queanbeyan, for example, has more rights than any other citizen who lives in the ACT,” she said.

The letter referred to Australia’s obligation under Article 25 of the International Covenant on Civil and Political Rights which ensures that “every citizen shall have the right and the opportunity … to take part in the conduct of public affairs, directly or through freely chosen representatives”.

Ms Cheyne said it was disappointing that the government had to remind the Commonwealth of its human rights obligations to its own citizens.

Assisted dying was legal in the NT between 1996 and 1997 before the Howard Government passed the Euthanasia Laws Act in 1997, introduced by Victorian Liberal MP Kevin Andrews, which repealed the right and amended both territories’ self-government acts, removing their ability to legislate on the issue.

While the Commonwealth Government has the power to make laws for the ACT and the Northern Territory, it rarely exercises this power.

A vote to repeal the laws was narrowly defeated in the Australian Senate in 2018. ACT Liberal Senator Zed Seselja voted against the bill.

Senator Seselja has since said he would consider an omnibus territories rights bill but would not move to legislate to strike down the Euthanasia Laws Act alone, saying it would create a pathway to legalising voluntary assisted dying.

Ms Lee said she had made direct representations to Prime Minister Scott Morrison and Senator Seselja.

Mr Rattenbury chastised Senator Seselja for voting against the bill, saying that regardless of personal views, the question being considered is about territory rights.

“You do not have to support voluntary assisted dying to support the democratic rights of your constituents,” he said.

Ms Lee’s co-sponsoring of the motion also marks a change of position for the Canberra Liberals who have previously been apprehensive on the issue and voted against a similar motion in 2014.

She said she had signed the letter on behalf of the Liberals and that the matter would be a conscience vote for their MLAs if legislation to legalise voluntary assisted dying comes before the ACT Assembly.

The Legislative Assembly issued a rebuke to the Federal Government in 2018 when the bill to remove the current restriction was voted down in the Senate.

The rebuke, known as a remonstrance motion, was treated as a conscience vote for the Liberals, with Nicole Lawder, Jeremy Hanson, Mark Parton and Elizabeth Lee voting to pass the motion.

I just wish these politicians would listen to the public rather than dismiss them, when discussing this topic… I thought they were there to represent the residents of the ACT, not tell us how it is and how we dont have the right to comment on this topic.

Can they start with the three political parties first so we can see if it works.

Just mow the bloody grass first. Canberra is starting to look like Detroit

If we didnt mix religion and politics this wouldnt be an issue,,, religion has no place in politics

People should be able to check out with dignity and when they want if they have a terminal illness, etc. It’s a very personal decision and no one should be allowed to interfere.
NO ONE

Emanuel Tamas absolutely and those who do not wish to have their loved ones ‘turned off’ should not be encouraged to do so … in our case we were told ‘to spare the suffering’.. had we done what they were pushing us to do, my child would now be dead. Serious caution needs to be taken so everyone is given rights…

This lot, and their predecessors, can’t sort health, education, rubbish collection, planning or public transport. Why would you give them any responsibility for something so important as euthanasia? The Federal Government should legislate for all.

Phil Andrews You’d trust Dutton with the power of life and death?
That’s the most terrifying thought I’ve had today.

Alex Brown You’ve got a point there

Alex Brown I’m sure they’d love to have the power of life and death, not over people who want to die, but people who annoy them by asking impertinent questions.

When are Canberran’s going to realise Zed only votes on what the bible says, not on what the residents of ACT want and need?

These two things are not necessarily mutually exclusive.

Jude May he’s represented Canberrans since 2004. We know what he stands for. The anti-Zed campaign last election failed. Apparently he is what we want.

So it’s really about euthanasia, not about territory rights.

Labor has had almost 20 years or so to sort out territory rights and done nothing. And now have the gall to whinge only because it limits what they truely want.

Our local politicians once again focusing on the imoortant issues well inside their area of control.

Agreed. They can’t even mow the grass or clean the streets properly.

So, let me get this right… in a democratic nation such as ours, the elected leaders have said no to this, or yes to this (it doesn’t really matter for the point).
Because the people with a wheelbarrow to push don’t like the answer of a democratically elected group of people, they decide to take it to an international body to decide? Which if it’s against the democratically elected members decision, would suggest a minority win and a stampede over the elected officials voice?
Well done. If you can’t win your argument within Australia through the democratically appointed process, then perhaps you’re in the minority and you need to enunciate your view a little more clearly? If you have done so, have you ever considered this isn’t what the community wants? As opposed to what you want?

I get where you are coming from but I don’t think you have the facts right. The majority of people in Australia have consistently wanted access to euthanasia. Some time ago, a politician (Andrews) unelected by the people of the ACT/NT stopped the ACT/NT from making laws on their own behalf in relation to assisted dying/euthanasia. Since then the states have been able to make the euthanasia laws for their own electors, but the people of the ACT/NT don’t have that same right So there is firstly an issue of fairness to have the same rights as other Australians to make laws and secondly the right to legislate for something that is overdue.

Acton,
We have the same exact rights, the democratically elected body as defined by our constitution has decided the law on this issue.

Otherwise, the exact same thing could be said in every single council area where the local government authority were not able to do something because of the state law.

Acton,
But we do have the same rights, the ACT and the NT are not states for very good reasons.

The elected democratic body that is responsible for this issue has legislated on it.

Whether you or I don’t like that law is irrelevant. We can lobby for it to be changed but it isn’t somehow a breach of our human rights that some people don’t like the outcome.

I also notice you didn’t address my comment about local governments. If you think this is somehow an example of different rights, why is not the exact same argument applicable to councils, many of whom would like to set their own rules on numerous issues that they are not entitled too?