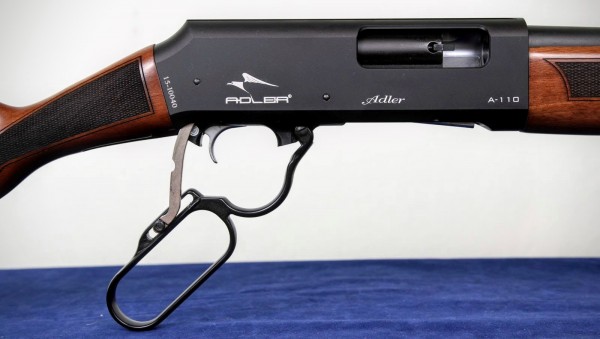 The ACT Government has today introduced legislation that will restrict the use of lever action shotguns in the ACT in line with a national agreement reached in December last year partly in response to increased prevalence of Adler A110 weapons in Australia.

The Firearms Amendment Bill 2017 will re-categorise lever action shotguns from Category A (for which licences can be held by any recreational shooter) for those with a magazine capacity of:
· Up to five rounds to Category B; and
· More than five rounds to Category D.
Category B licences are restricted to farmers and people with a specific need for using the firearm, such as recreational hunters or pest controllers.
A Category D classification is more restrictive – limiting the accessibility of firearms under that class to professional shooters and primary producers who have a genuine need that can’t be met by another firearm.

“The amended classifications strike an appropriate balance between the right of the community to live safely and the interests of licensed firearm users,” Mr Gentleman said.

As part of the review of the National Firearms Agreement the Council of Australian Governments (COAG) in December last year agreed to re-categorise lever action shotguns.

The Bill will meet the government’s commitment at COAG and aligns with the revised firearms agreement, released in February this year.

“It is important that our legislation keeps up with technology and effectively regulates firearms as changes and modifications occur.”

Well I suspect this won’t worry to many Canberrans all that much, nor even those recently arrived interstate human rights compliant bikie gangs .
They seem to prefer pistols.

That’s “illegal” pistols, which are smuggled into Australia in large quantities by corrupt public officials or illegal sawn-off shotguns (like Mans Monis had)

Good to see that ACT government tackling the big issues. I can’t help but think it’s taking precious time away from their virtue signalling, though.

Well, it’s certainly a bigger issue than safe schools, marriage equality or section 18c but in there are bigger fish to fry and you need electricity to fry something.

Imagine if they spent as much time and effort on solving the issue of illegal firearms as they do on these placebo pieces of legislation, we might actually get somewhere in solving the issue of illegal firearms and actually increase public safety. I don’t understand how anyone can think that restricting legal access to a 1850’s era firearm that is near impossible if not impossible to conceal will have any effect on gun crime what so ever. This is simply so the government can look like they are doing something about gun crime while not actually doing anything at all and the general public and media just eat it up, its pathetic.

All lever actions are the same; no such thing as a slow lever action or a rapid fire one.

And lever action rifles/shotguns are next to impossible to fire when in the prone position.

It’s great to see the states and territories working together on mutual recognition of certain regulations but I can think of many more that are far more important than lever action shotguns.

As far as leaver action firearms go shotguns a would have to be one of the slowest cycling of them all owing to the longer overall length of the ammunition requiring increased leaver throw and blunt nose of the ammunition causing them to jam frequently.

Well I suspect this won’t worry to many Canberrans all that much, nor even those recently arrived interstate human rights compliant bikie gangs .
They seem to prefer pistols.

Good to see that ACT government tackling the big issues. I can’t help but think it’s taking precious time away from their virtue signalling, though.

All lever actions are the same; no such thing as a slow lever action or a rapid fire one.

And lever action rifles/shotguns are next to impossible to fire when in the prone position.

It’s great to see the states and territories working together on mutual recognition of certain regulations but I can think of many more that are far more important than lever action shotguns.

Dani Hache - 2 hours ago
Whilst this is 100% accurate, it cannot be fixed with the government failing to invest in an APS workforce. These businesses... View
Bill Bloxham - 3 hours ago
Been going on since Adam was a boy View
David W Jones - 5 hours ago
Just look at the number of contractors that just keep getting extensions or renewals with no questions asked! View
News 6

jam - 2 hours ago
The tram is more easily accessed by more people as it encourages dense development within its reach. It isn’t really possib... View
bj_ACT - 3 hours ago
The issues with the Bus route changes and the loss of bus stops for Tuggeranong in 2019 were obvious to anyone with half a br... View
Winkie Wee - 5 hours ago
I'm lucky in that I live within a short walk to either the R4 or R5 buses. I use the bus quite a bit unless both of us need t... View
Breaking 4

jam - 2 hours ago
That said, though, bikes are required to slow to around 10km/h before crossing - a bike crossing at the otherwise speed limit... View
jam - 2 hours ago
It is not “bugger all inconvenience” it actually makes a big difference when it is your commute! When I drive past a cros... View
liberalsocialist - 6 hours ago
What a disgrace. And while in no way taking away from this cowardly act, I have come from NSW where we are told to dismount a... View
News 161

Jimbo Lambert - 3 hours ago
Areas in Gungahlin haven't been mowed for at least 6 months! How hard is it to use our high rates money to employ some more m... View
Jimbo Lambert - 3 hours ago
Randy Goldberg you mean 6 months later? You must live in a more affluent area than Gungahlin, as it seems we have been alloca... View
Frank Arnold - 5 hours ago
Ohhh myyy Goddd !...Crooked pavements!...pot holes in our roads!...and now it's long grass !!!! FFS we hardly had any 3/4 yea... View
Community 6

kenbehrens - 6 hours ago
That makes no sense. Your comparisons are 20-25 years apart. The "new" bus route takes longer because it services a bigger ar... View
bj_ACT - 6 hours ago
Not sure about the adding 10 minutes to the 333 journey by changing to go past College St and UC. The change Only added 1.2km... View
michael quirk - 11 hours ago
Yes,but it is by no means certain that light rail stimulates urban redevelopment more than BRT. Much depends on design of the... View
News 1

JS9 - 13 hours ago
All this highlights again is a) How ridiculously stupid the retail electricity approach in Australia is in general (basically... View
show more show less
*Results are based on activity within last 7 days

@the_riotact @The_RiotACT
Hot in the City: You knead a box of The Bite CBR’s pretzels in your life! https://t.co/6b3M1kuAyH (3 hours ago)