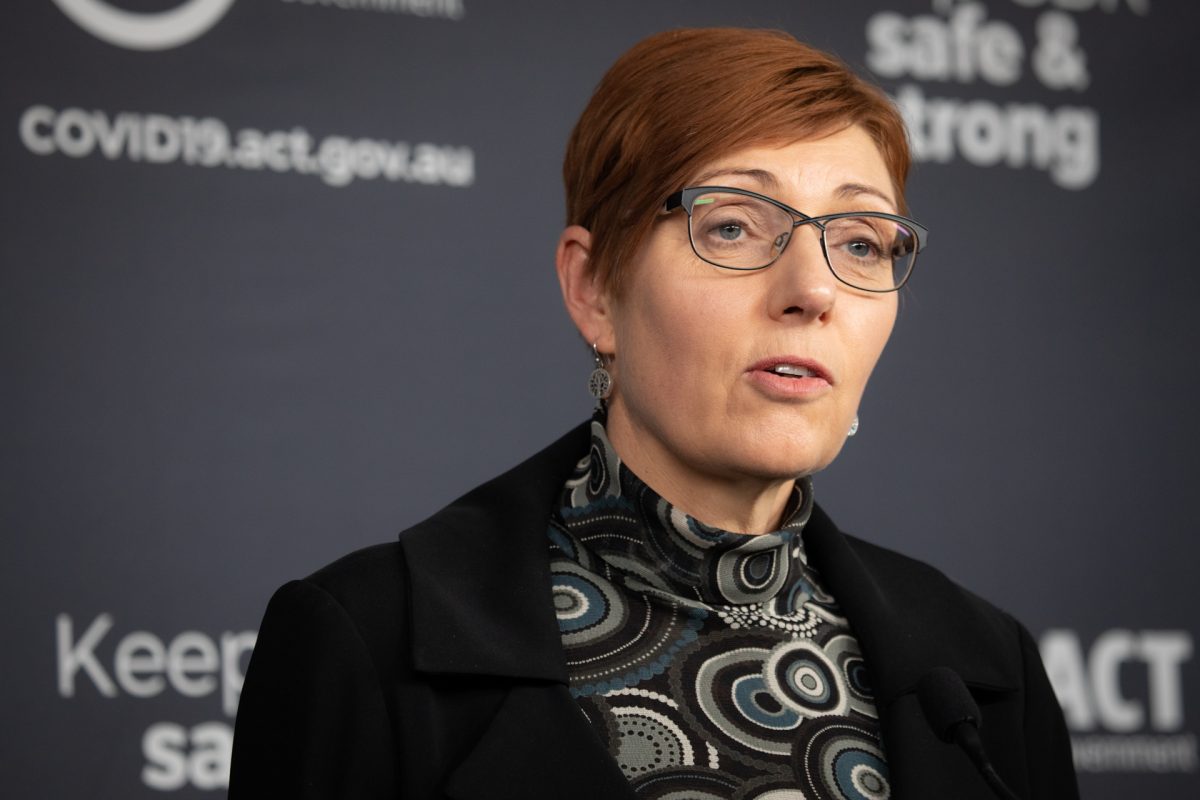 Minister for Health Rachel Stephen-Smith has sought to strongly encourage and urge mask-wearing when indoors but has steered clear of mandates. Photo: Michelle Kroll.

UPDATED 2 pm: ACT Health says the most recent modelling undertaken by the Doherty Institute and the Australian National University predicts the Territory’s case numbers to peak at around 3000 per day between mid-August and mid-September.

A spokesperson for the department confirmed the plateaued case numbers over the past fortnight could indicate cases have peaked for this current wave – being driven by the spread of the BA.4 and BA.5 subvariant – but it is also consistent with previous patterns of disease transmission seen in the ACT during school holidays.

Health said the recent reduction in daily case numbers could be due to a number of factors including improved COVID Smart behaviours and “under-ascertainment” of cases. The directorate, and health authorities more generally, have stressed modelling is just modelling and does not always come to fruition.

Minister for Health Rachel Stephen-Smith said this remains an “uncertain time” as it’s unclear what impact the school holidays have had on caseloads.

“We don’t know where this is going to go. My best guess is that numbers are going to stabilise,” she said.

Some experts have reportedly said the Territory’s current wave has already peaked and cases are now expected to decline, although this view is not shared by the Australian Medical Association.

The updated modelling follows an announcement from Chief Health Officer Dr Kerryn Coleman on 11 July that caseloads could peak between 2000 to 3000 a day by the end of July or early August.

Ms Stephen-Smith said today the government had ramped up its public health messaging on the importance of wearing masks indoors and would continue to do so in the coming weeks and months.

She stressed some people had yet to get the message that the government recommended it.

“Wearing a mask is an effective way to reduce the spread of COVID-19 and other respiratory illnesses,” she said.

Masks are mandatory in the ACT for high-risk individuals, such as household contacts of confirmed cases and high-risk settings including public transport and healthcare facilities. 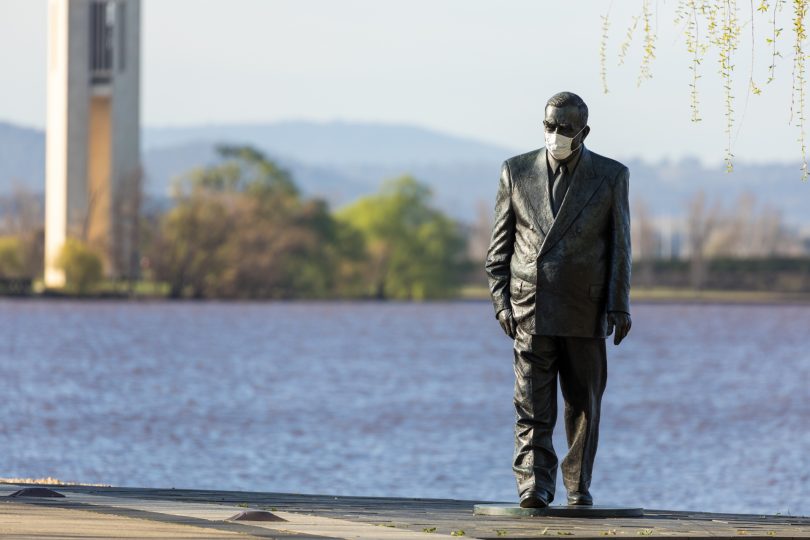 You may not be mandated to wear one on your walk around Lake Burley Griffin but authorities and doctors want them on when you’re indoors in crowded settings. Photo: Michelle Kroll.

There are now 141 people in hospital and only one is in ICU.

It’s another significant decrease from yesterday when 151 people were in hospital with the virus.

The consistently decreasing or stable daily caseloads have prompted some commentary that the Territory may have reached the peak of the BA.4 and BA.5 wave already.

But Australian Medical Association ACT branch president Dr Walter Abhayaratna argued it’s too early to say whether or not this has happened – particularly given the possibility of re-infection with the virus only a month after being cleared from an initial infection.

He did, however, suggest the previous Doherty Institute modelling around the ACT reporting caseloads of between 2000 and 3000 by the end of July and mid-August now seems unlikely.

“I am not confident that we can say we have reached [a peak]. That would be optimistic and that would be nice but I just don’t think it’s a great idea,” he said.

“Now that we’ve got that evidence people can be re-infected with the virus it makes no sense to start relaxing.

“These BA.4 and BA.5 variants don’t seem to be following the same type of modelling [as previous variants].”

Dr Abhayaratna also agreed with the Territory’s health authorities who have urged caution as school goes back. Last term, the return to school brought an uptick of COVID-19 cases. Schools are now mid-way through Week 2. 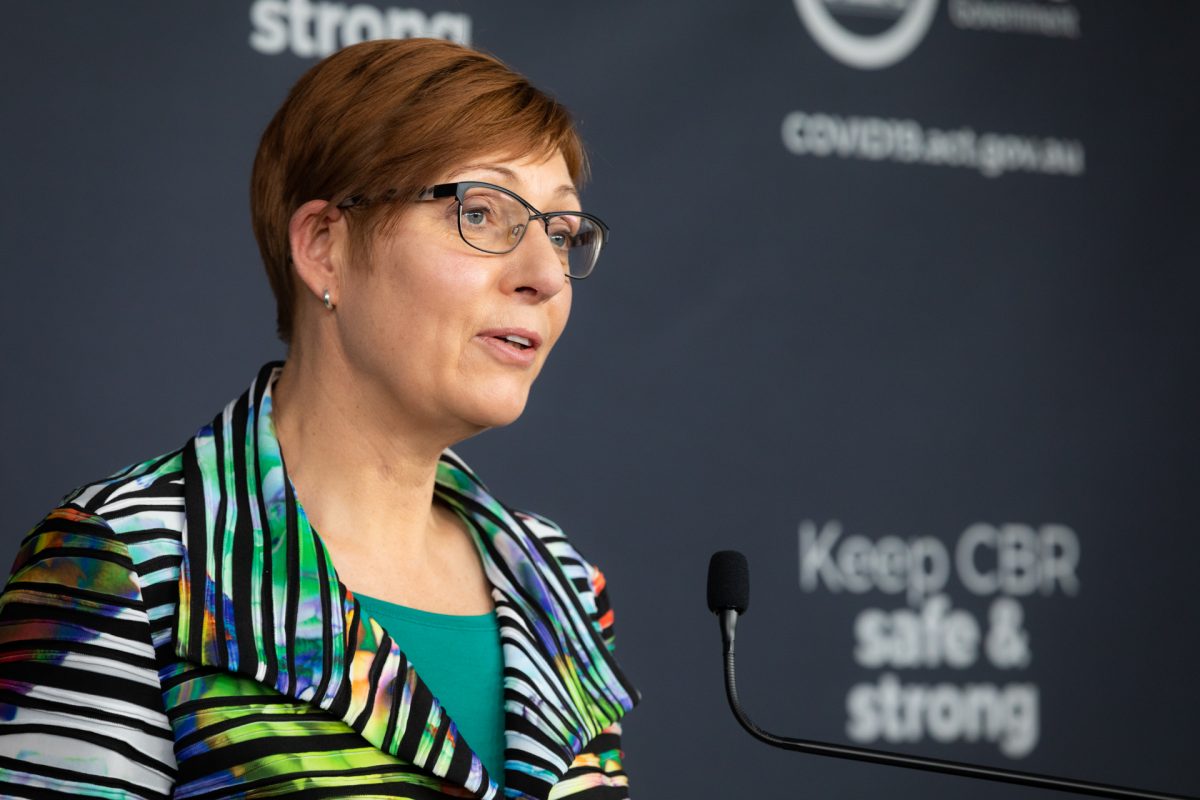 Minister for Health Rachel Stephen-Smith is expected to give an update on mask-wearing this afternoon. Photo: Michelle Kroll.

Minister for Health Rachel Stephen-Smith is expected to provide an update on advice around mask-wearing this afternoon.

It’s unlikely she will move to reintroduce a broad-based mask mandate as authorities have previously pushed back against this, arguing the time for mandates has passed.

Dr Abhayaratna disagreed with the introduction of a “heavy-handed” mandate, but he did say he wanted to see the population given a “nudge” in the right direction to wear masks in indoor settings.

“I don’t want to see people fined for not wearing them or to create a situation where we have to monitor it. But governments can create a new norm around it.”

READ ALSO What’s the story with the Garran Surge Centre?

There are now 2275 people in hospital with the virus and 56 people in ICUs around the state.

There are now 872 people hospitalised with the virus and 33 patients are in the state’s intensive care units.

1 person in ICU. While ACT Health and govt obsess about case numbers and modelling.

The ACT can probably drag this pandemic out forever. Interesting though that the Minister herself does not believe the modelling any more, and is willing to say so publicly.