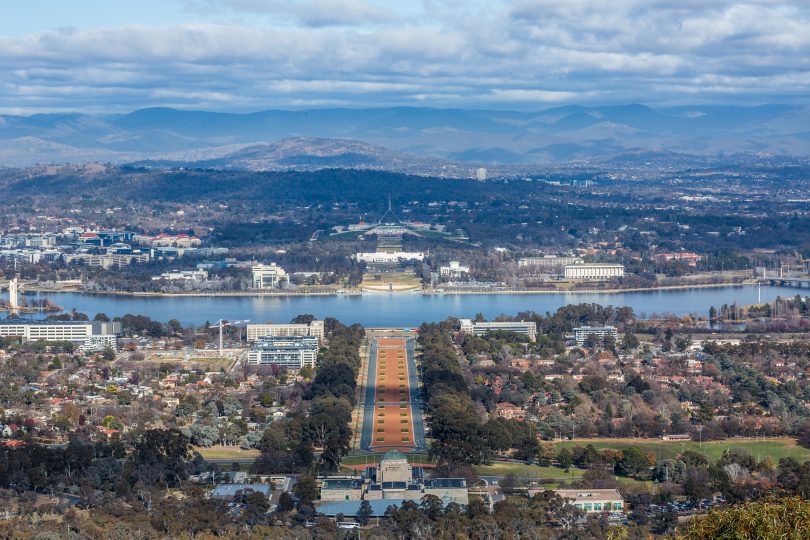 The bush capital is a favourite with international visitors who have increased their spending here by a greater percentage than for any other state or territory. Photo: Jack Mohr.

International visitors to Canberra spent a record $535.4 million in the 2016-17 financial year – a 27 per cent increase over the previous year.

Total international visitor numbers also increased by 9 per cent to 221,479 according to the latest ‘International Visitors in Australia’ report put out by Tourism Research Australia.

The increase in international visitor expenditure in the ACT was the largest percentage increase of any of the states and territories.

Tasmania enjoyed the second biggest percentage increase in spending – with expenditure in the Apple Isle increasing by 24 per cent to $457 million in the year ending June 2017.

Despite the ACT’s small geographical size, international visitors spent more money in the territory than they did in either the Northern Territory ($485 million) or Tasmania. The biggest expenditure was in NSW – at $10.1 billion.

The main reason international visitors came to Canberra was for leisure (167,413 visitors), followed by business (28,423 visitors) and education (17,874 visitors).

Nationally, spending by international visitors reached the $40 billion mark for the first time in the 2016-17 financial year.

A record 7.9 million international visitors aged 15 years and over chose to travel to Australia – an increase of 9 per cent on the previous year. Their spending reached a record $40.6 billion, an increase of 7 per cent.

The growth in visitor numbers to Australia was underpinned by visitors traveling for the purposes of education and holidays.

Visitor numbers from Australia’s key markets of the United States, Japan and China increased the most.

Visitor numbers from the two other key markets of the United Kingdom and New Zealand only increased slightly and spending from UK visitors fell by 8 per cent to $3.5 billion.

Have you noticed more international visitors in Canberra? Can we do even more to attract them? Let us know your thoughts in the comments below.

I guess this is meant to be good news but I see no evidence of this bonanza trickling down to the general community. More shops seem to be closing and activity at shopping centres is less than ever before.

I haven’t seen any more “international visitors” in the last year than in previous years. I would be interested in details of where they stay/go in Canberra.

Perhaps ACT Revenue could scope ways of taxing the wealth generated by this booming sector to offset the need to continually soak us ratepayers.

Interesting. When the ACT Government says ‘International visitors’ I assume that this increase is due solely to more Chinese visitors to Canberra. And I assume that this increase is nearly 100 per cent made up due to increased numbers of Chinese students studying in Canberra and the fact that their families, parents, come and visit them each year for up to a month. This is of course great for the Canberra economy but has almost nothing to do with Canberra as a tourist destination.

I have anecdotal evidence that European backpackers avoid Canberra because it is expensive to travel to/from and stay. They found public transport deficient also.

If you were an “international traveller” coming to Australia and you Googled Canberra as a destination this is what you would get:

nobody - 1 hour ago
Great news, well done. View
switch - 3 hours ago
I think they mean Delta Myna major pest. View
Capital Retro - 4 hours ago
What a ripper of a headline. View
Courts & Crime 1

Julie Macklin - 1 hour ago
Flannelette shirt. That's all I have known them called and what I have always called them. Never hard of the other words befo... View
Brisal - 3 hours ago
Define "Northern Tuggeranong". Most suburbs have their small shopping centre with a Supabarn or IGA or similar, within short... View
Tony Jim - 4 hours ago
Flanno for sure. BCF have the best and warmest View
Property 2

consumeradvocatecanberra - 2 hours ago
Hmm, what a great place for a satellite city for Queanbeyan or even Canberra (thinking Oaks Estate-perhaps not workable) but... View
MERC600 - 2 hours ago
It's been quite a while since I wandered into the Captains Flat local. Back then they were only using one corner of the place... View
Business 10

@The_RiotACT @The_RiotACT
E-scooters could soon be on their way to Mitchell and Gungahlin after a motion was passed in the Legislative Assembly approving the expansion of the scheme https://t.co/nOkxUWWgdh (38 minutes ago)

@The_RiotACT @The_RiotACT
Have you been speeding through the new 40 km/h zones in the city? Be warned, the grace period is coming to an end https://t.co/aczSVdQdXZ (1 hour ago)

@The_RiotACT @The_RiotACT
The ACT's speed-camera network will be reviewed after a leap-year glitch resulted in a ticket being successfully challenged in court https://t.co/bsoWJaQVHv (2 hours ago)