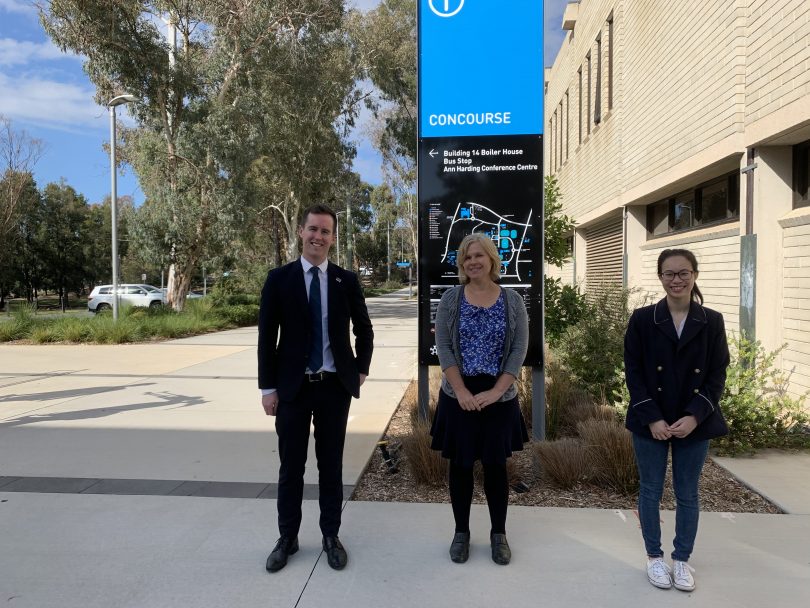 The ACT Government has stepped in with an initial $450,000 package to support the city’s international workers who have fallen through the federal COVID-19 safety net.

The money will go to visa holders and international students who are ineligible for Commonwealth assistance programs such as JobKeeper and JobSeeker.

Minister for Multicultural Affairs and Tertiary Education Chris Steel said the ACT Government had joined with the ACT Refugee, Asylum Seeker and Humanitarian (RASH) Coordination Committee, the Australian Red Cross and local universities to lobby the Federal Government to provide support for international workers who had lost their jobs or a substantial part of their income, but the pleas have fallen on deaf ears.

Under the new funding package, the RASH Coordination Committee – made up of groups working with asylum seekers including Companion House – will receive $140,000 to provide urgent support to asylum seekers living in Canberra.

The Australian Red Cross’s existing emergency support program will be extended through a $160,000 grant to assist other temporary visa holders including people on temporary work visas and safe haven enterprise visas.

Mr Steel said the Federal Government’s refusal to help meant many Canberrans on temporary visas had now lost work and had literally no income and no support.

The ACT has about 200 asylum seekers and 300 residents on temporary protection and safe haven enterprise visas, as well as about 2,300 international students.

”They can’t work and they can’t go home, in many cases because they would be persecuted if they did,” he said. ”The new emergency funding will help with the basics so that people on temporary visas can survive through this.”

Mr Steel said that this package adds to the Government’s ‘Jobs for Canberrans package’ which prioritised immediate short-term employment to casual or semi-skilled workers on temporary visas ineligible for the JobSeeker and JobKeeper programs.

The Canberra Relief Network is also providing food for temporary visa holders and ACT funding has been announced to help Canberrans facing homelessness, or experiencing domestic and family violence.

The Red Cross will also work with universities to help struggling international students.

Mr Steel said that while some of those students were well supported by their families at home, others were experiencing hardship with work drying up, particularly in the hospitality industry.

He said some had arrived in Canberra at the beginning of the pandemic while others were established students ready to resume their studies, and even if they wanted to go home the cost would be exorbitant.

He said it was important that Canberra maintained its reputation as a university town.

“We are committed to ensuring Canberra remains a study destination of choice by supporting our international students living in Canberra who play such an important part in the cultural and economic life of our city,” said Mr Steel.

“The ACT Government will work with tertiary education institutions to develop the application process so international students affected by COVID-19, without other support, can access emergency relief through their institution.”

UC software engineering student Greene Vu has lived in Canberra for three years and supports herself with casual jobs but she hasn’t worked for six weeks and has been surviving on money from her parents in Vietnam.

She is looking at returning to some work as food and beverage attendant with a hotel and as a student ambassador for Study Canberra but says the package is reassuring for her and other international students who may need help with food and rent.

Executive Director of Companion House Kathy Ragless said the RASH funding would help us ensure those people got the assistance they needed, including emergency accommodation, legal advice and access to health services.

Mr Steel said further help may be on the cards and the government would monitor the take-up of the package to assess the situation.

Not sure when this photo was taken, but If we are serious about social distancing, can we ensure that these three understand what 1.5metres apart is.

Josette Noble some of them are taxpayers

You get to have your say in September, I think.

We can’t let *anyone* fall through the cracks. Force people to isolate, cut off international travel, kill their jobs, what the hell are they supposed to do?

Lee McDowall we can only hope!

Don’t worry ,our exorbitant rates for housing will pay for it .

Joan Legge try thinking of others. Or even just thinking about the full picture. It’s not hard……

This is home for them. They pay tax, bring in revenue and spend here.

How and when can u apply for this?

Why didn’t they go home when the Prime Minister told them to? Seriously, there’s heaps of Australian citizens in Canberra in the same boat, what are you doing to help them?

Jackie Tomich easier said than done because many of them are asylum seekers and others are more than likely from countries who have shut down their airports. We tried to get back to Oz and even that wasnt easy and I wont even mention cost!

A lot couldn’t get flights because their borders had closed. Others live here permanently such as NZ citizens, work and pay taxes for years but are ineligible for any benefits. There is plenty of help for australian citizens. These are the group that are not eligible and cannot suppport their families. The “what about me” mentality of some people really disgusts me!

Did you even read the article?

Jackie Tomich well it’s really not that simple. People are here who have been living in Australia for years. And paying taxes to the Australian government I might add. This IS home to thousands of them.

Lucky australians overseas are being treated better than this.

Dare I say, is this a comment you would expect from someone who does not live in the ACT. Surely we could extend our generosity to those more unfortunate then us, and I commend the actions of the ACT government.

Noel – she lives in the Gold Coast…

Jackie Tomich so you’re okay for them to pay taxes but not okay for those same taxes to help them in a what is essentially a worldwide humanitarian crisis.

Peter Marshall I hope the QLD Premier brings in the same thing so she can whinge on the Gold Coast Times page. This is not going to affect her whatsoever!