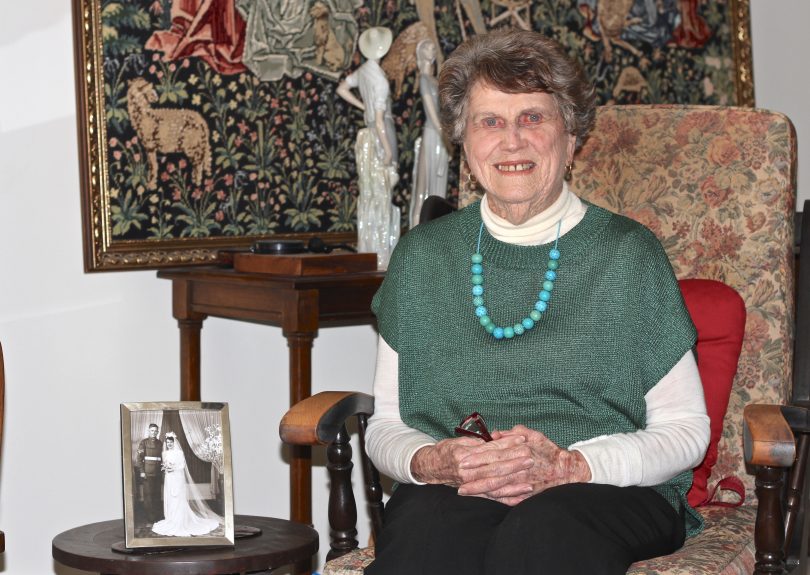 Gwen Vinall beside her wedding photo in her home at the Goodwin retirement village in Ainslie. Photos: Michael Weaver.

“I’m almost an antique, but I don’t want to be an antique because that’s when you buff them up and put them in a cabinet and I don’t want to be buffed up and put in a cabinet, thank you very much,” says Gwen Vinall, who at 96, is one of the reasons the ACT has again recorded the highest female life expectancy of all Australian states and territories for the second year in succession.

“We are all concerned about growing old and the effect it has on our families, but we all just want to maintain our complete independence,” an exceptionally independent Gwen says while discussing the joys of driving in Canberra’s open spaces and a life well-lived.

Speaking to Region Media from her home at the Goodwin Village in Ainslie, Gwen says her motto is to “adapt and adopt” to whatever life throws at you, and she’s very happy to say her mind is more interested than ever. 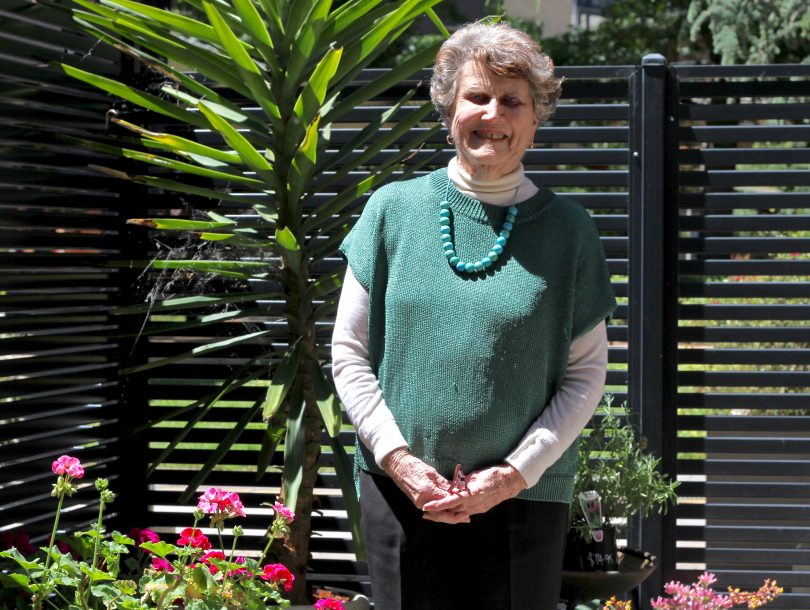 “You learn a lot of lessons from other people,” says Gwen Vinall in her garden at her home in Ainslie.

“I’m very happy that my mind is still active and interested in learning things about other people’s lives and how they operate. You learn a lot of lessons from other people,” Gwen says.

“This helps us to grow old gracefully and graciously, and that to me is very important.”

Born in Quorn in the Flinders Ranges in 1924, Gwen is still a country girl of South Australia at heart who has also lived in Adelaide, Sydney and South Africa during the 1960s.

She and her late husband Colin, who died 27 years ago, have three children, plus 12 grandchildren and 10 great-grandchildren.

Gwen recalls she had a sudden cardiac arrest 10 years ago but was saved by her daughter while they were walking together on the Gold Coast.

She says good friends and companionship keep her going, along with a weekly gathering for wine, cheese and biscuits with her friends at the retirement village where they discuss movies and classical music.

“I want to be buried to the refrains of Finlandia by Finnish composer Jean Sibelius,” Gwen says, “but I don’t have any grand plans for my departure just yet. I had my eyes tested yesterday for my licence as I love driving. I love the parks and open spaces here in Canberra. I miss the ocean but Lake Burley Griffin is the next best thing.

“I’m just glad to be close to my family and to still have my independence.

“For my 85th birthday, a man in leather with a helmet knocked on my door. I don’t usually associate with those kinds of people but he said he was here to take me for a ride on a Harley-Davidson. That was a big thrill and he was a lovely man.”

READ ALSO: Word of the year is distinctly Australian, distinctly 2020, but what is it?

As the world and its population ages, Australia now has the sixth-highest male and female combined life expectancy in the world behind Japan, Switzerland, Singapore, Spain and Italy. It is also higher than comparable countries such as New Zealand, the United Kingdom and the US.

While the older population has taken a small hit with the COVID-19 pandemic, Gwen says the virus has not changed her view on life but she feels it has made her aware of the increasing population.

“I’m very passionate about how the climate is changing and hearing the views of young people who are a lot more aware of their world than I was. I love talking with the younger generation,” she says.

“I think of the history of our world, and it’s not until you look back, you see how nature has a way of ironing things out. We can’t control ourselves so nature takes over and does that for us.”

Jacq Miller - 4 hours ago
shame there are no longer all 4 in situ View
Barry Matson - 7 hours ago
of what? View
Michael Guina - 8 hours ago
It has to start somewhere and those two buildings are living example . View
Opinion 80

Max Kelty - 8 hours ago
Bel Lee your housing manager mustn't be doing their job then or else processes have changed. When I was a HM at HACT people w... View
William Coats - 13 hours ago
The land tax was to stop people “land banking” houses should be used as homes not stagnant investments View
Lea Powell - 18 hours ago
William Coats it takes time to change policy directions. It’s not as simple as a click of the fingers. View
News 8

HiddenDragon - 9 hours ago
Some cautionary words here about the limits of battery technology - https://www.abc.net.au/news/2021-02-16/bill-gates-zero-em... View
dulynoted - 11 hours ago
those statistics might be outdated; renewables are getting cheaper and more energy efficient every year as technology improve... View
Capital Retro - 13 hours ago
In which way isn't nuclear power profitable? It depends on which experts you are talking too: https://www.ceda.com.au/NewsAnd... View
Sport 2

Pia Kivela - 9 hours ago
Good on you View
Lifestyle 13

Katrina Eadie-Bergin - 10 hours ago
Rowan Bergin I very much look forward to it ❤️... View
News 37

bj_ACT - 18 hours ago
Yes razor it’s a good point. Agree there are pockets of Tuggeranong and Belconnen that could do with some ACT government do... View
mattm - 19 hours ago
There are almost 130 Councils in NSW, and most of them do a much better job with municipal services than the ACT Government.... View
Heavs - 20 hours ago
Competent councils - like this one? https://www.canberratimes.com.au/story/6978805/nsw-central-coast-council-to-be-sacked/ Or... View
Community 1

Sammy Elder - 20 hours ago
What a great collection of memorabilia, thanks for sharing the images and some of the history behind them. View
Property 7

@The_RiotACT @The_RiotACT
How long since you've gone out for authentic Mexican food? Mochachos is bringing the heat to Kingston https://t.co/lsjPa6sCey (9 hours ago)

@The_RiotACT @The_RiotACT
Property prices are skyrocketing in Canberra, and auctions are the hottest place to be right now. We have some auction tips from the experts https://t.co/U4VvoS6BaQ (10 hours ago)