Action-packed performance from the streets will have The Q jumping 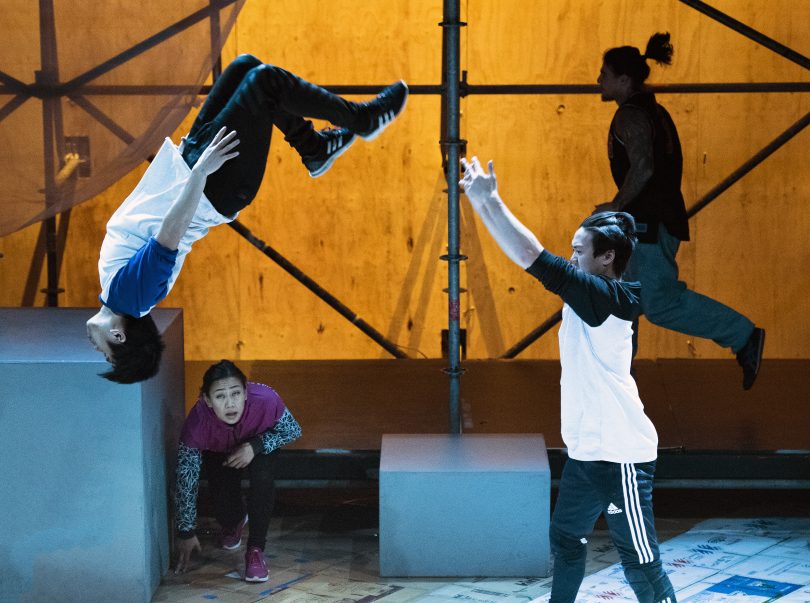 It’s high energy and a thrilling celebration of the will to succeed.

Jump First, Ask Later—on for one night only at The Q in Queanbeyan—captures the stories of six young people from the vibrant streets of Western Sydney who are champions of underground parkour and street-style community.

Parkour is a training discipline using movement developed from military obstacle course training. Practitioners aim to get from one point to another in a complex environment, without assistive equipment and in the fastest and most efficient way possible.

This multi-award winning, physically inspiring choreographic showcase has been described by organisers as a “high octane show”, and with good reason.

They’re young, incredibly strong and breathtakingly agile. Their combinations of street culture, dancing, gymnastics and parkour will have you spellbound. And they’re coming to The Q – Queanbeyan Performing Arts Centre for one day only for a high-energy performance called Jump Now, Ask Later. Here’s more from the show’s young stars: http://ow.ly/sgp950tXt84

Jump First, Ask Later performers, all aged 18 to 26 and from Dauntless Movement Crew, have been trained in parkour, acrobatics, martial arts, tricking and street dance. They simply don’t know how to stop moving! 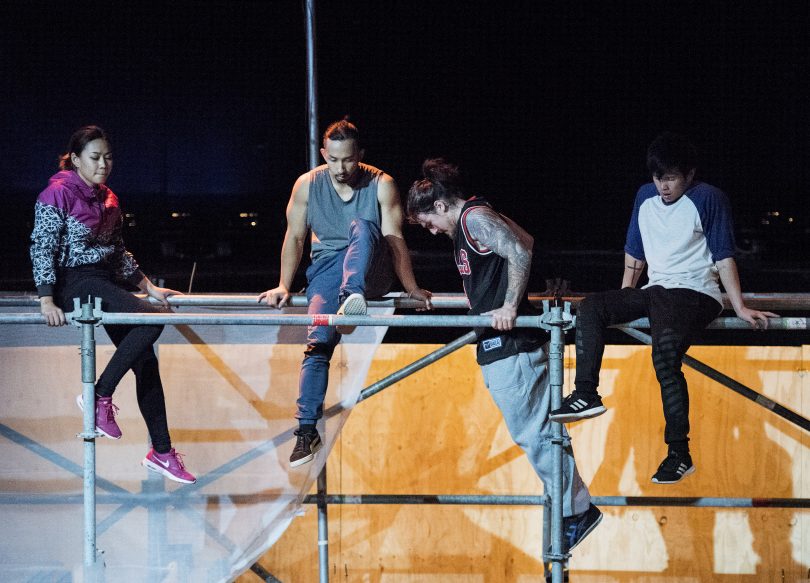 Performers, aged 18 to 26, are from the Dauntless Movement Crew.

“The stories were drawn from members of the crew, some of whom are performing and some not, but all the heart-warming stories are from team members,” says Thom Smyth, from Performing Lines, which is touring the show in line with its mission to support artists whose work pushes boundaries and sparks urgent conversations.

The performance is more than physically inspiring, however. Jump First, Ask Later, directed by Byron Perry, reveals the stories of these first and second-generation Australians and the freedom movement has given them from daily social isolation and stigma.

Audiences learn about the performers’ individual journeys, their personal challenges and triumphs, and how they came together around their “street-meets-sport-meets art” life. The show mixes emotions at the highest levels—sadness, laughter, joy, wit, adversity, hardship and inspiration.

While many see parkour as an extreme urban street sport, for these artists it’s a creative mindset, motivating them to never avoid physical or life obstacles but overcome them to find a new way. “Every flip, trick and drop of sweat is a celebration of the will to succeed,” says Thom. 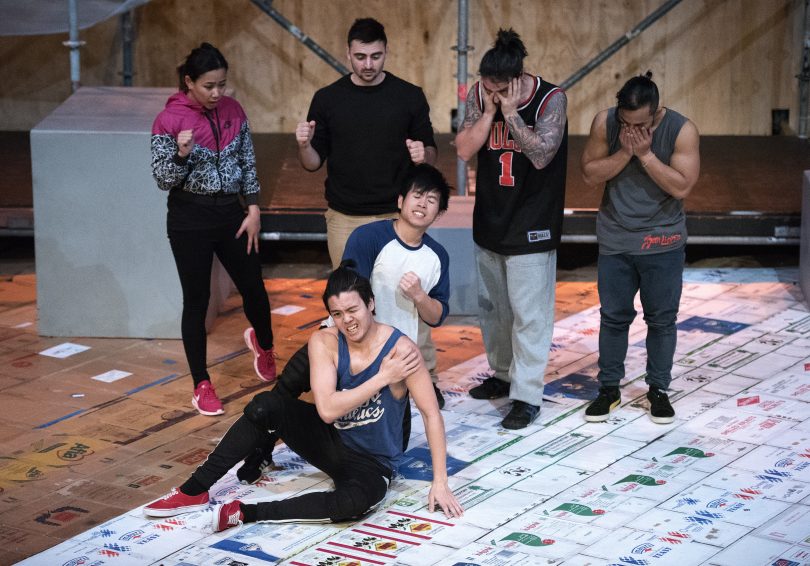 Jump First, Ask Later was created by PYT Fairfield, an award-winning company with a reputation for making brave and transformative work, and Force Majeure, which produces critically acclaimed dance theatre. Dauntless Movement Crew now has more than 30 performers and educators who work with people from across Western Sydney.

“It was performed previously in Fairfield, at the Sydney Opera House, in Melbourne and in Adelaide,” says Thom, “with audiences thrilled by the combination of high-energy choreography with scripted text and AV. Be ready for some volume.” 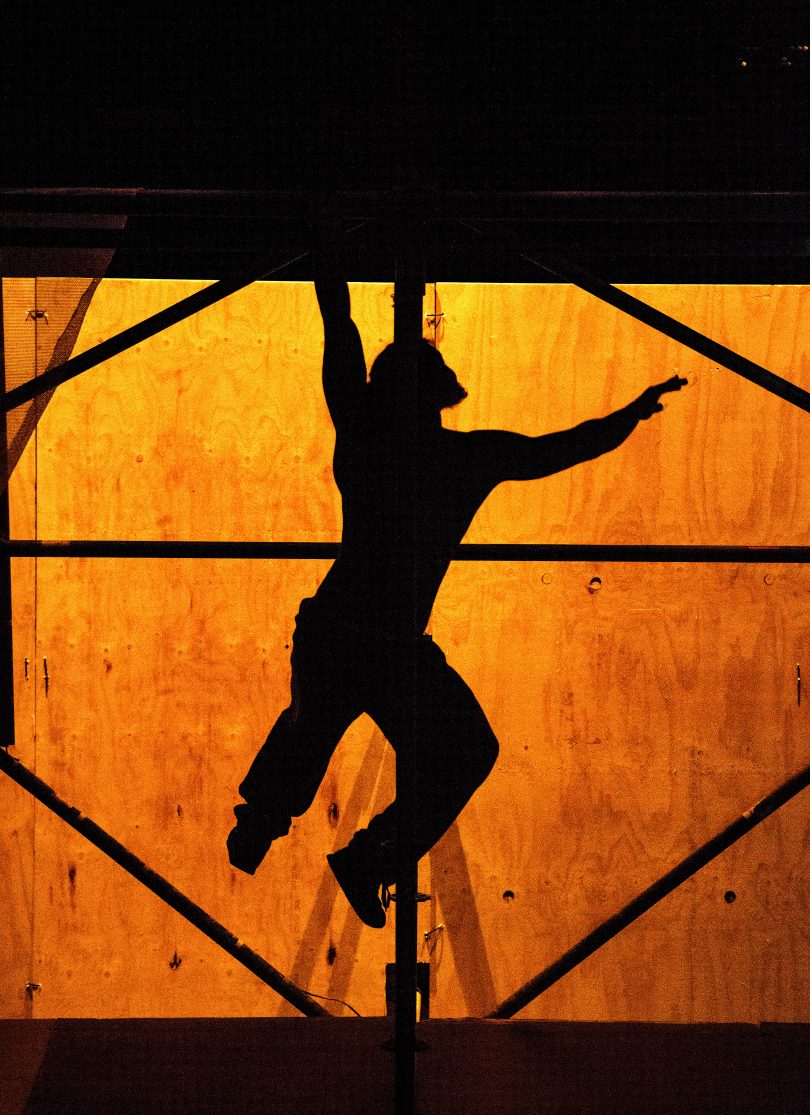 Parkour is a creative mindset for the Jump First, Ask Later performers.

Jump First, Ask Later is on for one night only at The Q, Queanbeyan Performing Arts Centre, on Friday 17 May.
Tickets for sale online.
The show is suitable for ages 10+. It contains some loud music.

WIN four tickets plus complimentary drink package for you and your friends to see this amazing show on Friday 17 May 2019, 8 pm.

To enter, simply tag one of the three friends you want to bring with you to the show on Facebook.

Competition closes on Wednesday 8 May, 17:00 EST. The winner will be contacted on Thursday 9 May.

Xuan Le - 16 minutes ago
I wish I knew this earlier.... View
Allan Hill - 2 hours ago
Good one Todd man. Got confidence in you... View
Todd Wills - 3 hours ago
Lisa Sly been doing some prep so hopefully all good xxxx View
News 43

Dan Myles - 26 minutes ago
Jorge Gatica so they now treat drugs addiction as an illness? or a great source of crime statistics to use for more funding? View
Ashley Latimer - 44 minutes ago
Bryce Jarvis Thanks bro, edited. View
Denise Cirson - 56 minutes ago
Sorry Bryce but in my opinion that is a load of rubbish.... View
News 9

Daniel Trevarthen - 50 minutes ago
Scott Abela except these ones catch fire even when they are just parked, not even charging! View
Jak Kanard - 2 hours ago
Bob Baxter - got to love it when a plan comes together...who knew this could possibly happen...doh ! View
Bob Baxter - 2 hours ago
Jak Kanard 🤣 View
News 8

@the_riotact @The_RiotACT
Events are making a comeback to Canberra now that lockdown has eased. And the timing couldn't be better! #Oktoberfest, #Halloween and #MelbourneCup Day are just some of the highlights to stick in your diary this week https://t.co/oXZLz4Gybr (31 minutes ago)