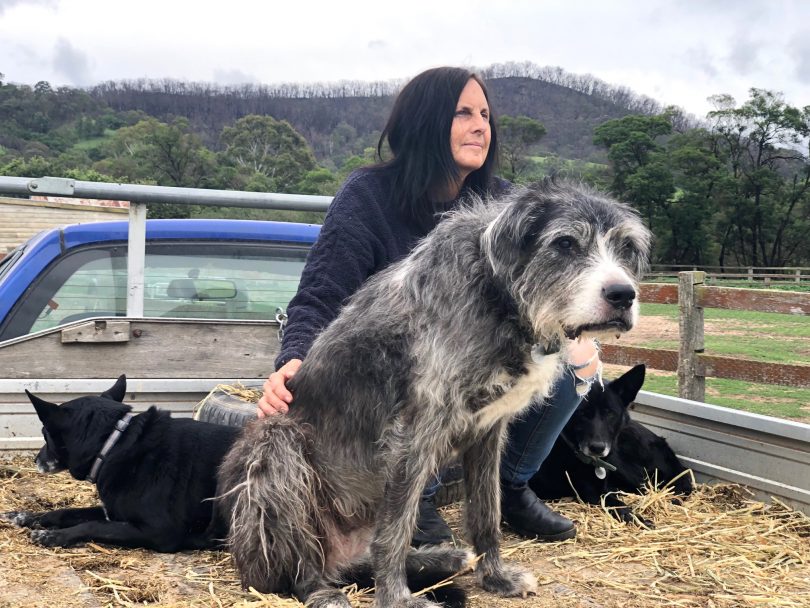 Billie Dean with her wolfhound cross Maeve and kelpies Tusuque and Sage. The burnt hill behind is where two eagles have just returned after the bushfires. Photo: Tamsin Dean Einspruch.

After dealing with bushfires, a flood and a drought, the owner of an animal sanctuary near Braidwood has raised her “extreme distress” about the use of poisonous 1080 baits one kilometre from the perimeter of her farm.

Billie Dean of the Deep Peace Farm Animal Sanctuary at Bombay, west of Braidwood, says she is fearful for all of her farm’s animals after receiving a letter from NSW Parks and Wildlife saying a baiting program would be “a continuous and ongoing baiting program using meat baits and canid pest ejectors containing 1080 poison for the control of dogs and foxes”.

A canid pest ejector is a spring-loaded device that propels the contents of the capsule directly into the mouth of a wild dog or fox. The ejectors are dangerous to working and domestic dogs because of the attractiveness of the baited head.

Ms Dean’s animal sanctuary cares for about 300 cows, sheep, horses, goats, geese, cats and dogs, making it one of the largest in the southern hemisphere.

A spokesperson for the NSW Minister for the Environment said the baits would also be deployed by air and would “comply with all relevant codes of practice and regulations and will be informed by a risk assessment”.

But Ms Dean said no one had asked them about the baiting program.

“It’s just been a case of the rangers saying they’re coming in and will be refreshing the baits weekly.”

Ms Dean said following this summer’s devastating bushfires that burned the surrounds of her property, there are no wild dogs and she has again been placed in a state of emotional distress for the safety of her animals who roam freely in the confines of her 240-hectare sanctuary.

“Nothing survived after the bushfires,” she said. “1080 is a foul, inhumane poison and when I asked the rangers about the danger to our animals, they just told me to muzzle my dogs or take them to a vet if they happen to mistake a poison for food.

The letter to Ms Dean also warned that 1080 poison is lethal and pets and working dogs may be affected.

A spokesperson for the NSW Minister for the Environment, Matt Kean, said failure to conduct the baiting program will mean foxes kill millions of native animals.

“Scientists are telling us that the bushfires will significantly increase the impact of feral predators – such as foxes – and overwhelmingly advise that we urgently implement landscape-scale control measures.

“The baiting will pose no significant risk to native species. Scientific research has shown native animals have a high tolerance to 1080,” the spokesperson told Region Media. 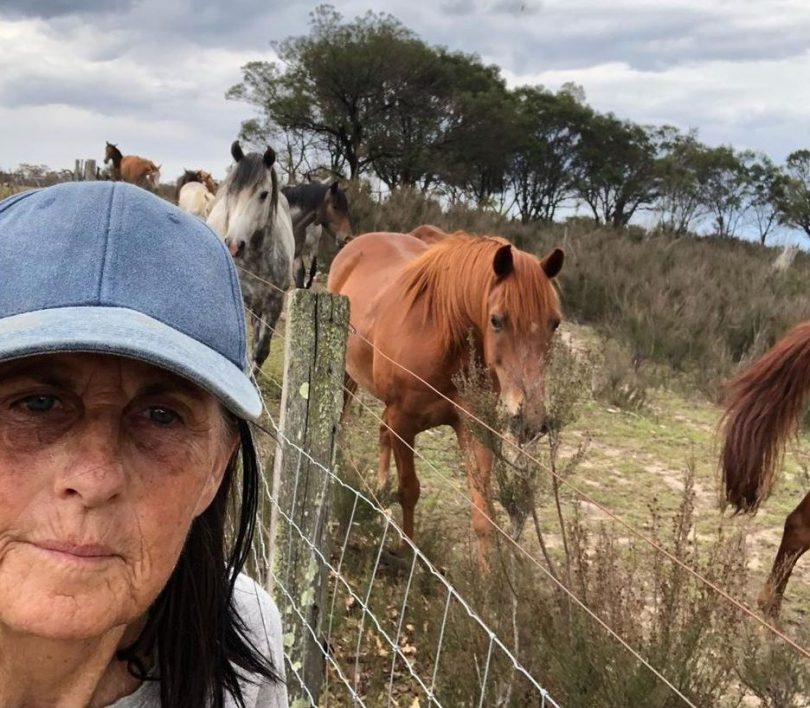 Billie Dean and her horses follow her around the animal sanctuary. Photo: Supplied.

Ms Dean said several of her neighbours have had their dogs die after eating a 1080 bait. She said the baiting program is causing her severe emotional distress after battling to save her animals after two months of bushfires, then floods from excessive rain.

“I’m not game to walk my dogs at the moment because I’m scared they might pick up a bait when my back is turned. They’re 15 years old and they need to go for a walk every day and I don’t want to see them die a horrible death.

“There are two eagles on the property as well that have only just returned after the fires. To lose them to a bait would be horrendous.”

Ms Dean said she had also heard of baits being picked up by birds and dropped on people’s properties. She said there are far more humane ways of dealing with foxes, such as trapping and rehoming them.

For wild dogs, Ms Dean argues, “What’s a wild dog anyway? It’s just a homeless dog. Why not trap them and send them to a sanctuary? Be humane.”

The NSW Government spokesperson said aerial baiting for 1080 was the most effective landscape control mechanism for foxes, and is one of a range of measures being implemented, including aerial shooting, the provision of supplementary food and water for threatened populations and assistance for wildlife carers.

However, Ms Dean said they don’t get assistance and thousands of property owners in NSW had petitioned the government about its continued use of 1080 baits, which is banned in all countries except Australia and New Zealand. She said the issue was even more pertinent given that the government is considering opening national parks to grazing following the devastation caused by bushfires.

“We are all in distress here again by having to deal with the fallout from 1080 baits,” she said. “It’s not just utterly wrong for the forest and the wild, but everyone and their beloved families living on the border of the fire grounds.”

For those who support the use of 1080 poison, open your eyes and watch the footage of how the animals die a slow and painful death from ingesting it. Natives and introduced species. Refer to the FB group, Coalition of Australians Against 1080 poison.

Control your own livestock inside your own boundary.

Its the most evil way of killing creatures and should be outlawed as it is most countries.

If she keeps her animals inside her property boundary, and supervises dogs and cats like a responsible owner, she won’t have a problem.

It is also utterly ridiculous to think wild dogs and foxes can be trapped and “rehomed”. This person is clueless, and is running another feral animal breeding sanctuary it seems. I’ll guarantee she isn’t controlling them on her property, which she is obliged to do.

Apart from the wild dogs and foxes, Talleganda was always absolutely full of wild pigs. I don’t believe for a minute that she has 250 sheep on the place and never had a dog, fox or pig kill lambs or sheep. Ask any other property owner in the area and I know for a fact that they will tell you a completely different story.

1080 is such a hideous poison, only the manufactures want it because they make lots of money. We dont want it in New Zealand either it Kills everything. Its garstly

I have sympathy for this person. The saddest thing though is to see a fox with a native animal in its jaws. They cannot be ‘rehomed’ unless we send them back to the UK. They don’t belong here. Humans bought them here, now we have to manage that poor decision.

“The baiting will pose no significant risk to native species. Scientific research has shown native animals have a high tolerance to 1080,”???? Seriously? Are they for real? What a joke 😠

They should stop aerial baiting and bury them as they do in National Parks around Sydney. Signs are erected to dog walkers to stay out just after the baiting. Only foxes dig for them. The native marsupials have returned to gardens and the fixes are disappearing. The down side is that Brush Turkey numbers have exploded as foxes used to eat the unguarded chicks. Bad news for gardeners!

If she cared about the animals on sanctuary wouldn’t she be encouraging the control of wild dogs and foxes?

I did read the article. At the moment 1080 is the best way to conduct broad scale pest control. I think she is also misinformed about the use of 1080. The LD50 of 1080 is such that it wouldn’t kill the wedge tail eagles. The comment about trapping and rehoming wild dogs did give me a laugh though.