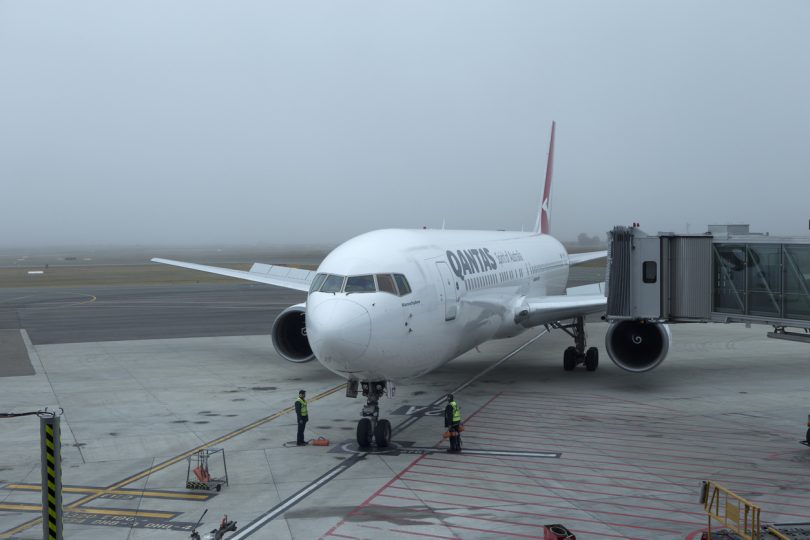 A Qantas Boeing 767 parked at Canberra Airport on a foggy morning.

Flight delays caused by winter fog at Canberra Airport should be fewer soon with a nearly completed $6.5 million project to install a new runway lighting system set to give pilots more visibility.

The Airport said the new lighting system would assist both landing and departing aircraft and make services more reliable for passengers, especially in foggy and rainy weather like Canberra experienced on Wednesday, although no flights were affected then.

With new touch down and runway centreline lights and enhanced back-up reliability, it would allow pilots get their planes closer to the runway during attempts to land.

The Airport said that at present, pilots can go as low as 200 feet above the runway before deciding if they had enough visibility to land but the new Category II lighting system allowed them to get just 100 feet off the ground, much closer to the runway and lights, making landing for pilots much easier and more likely.

For passengers, this meant more aircraft could land, saving time and increasing safety in adverse weather, it said.

Managing Director of Canberra Airport, Stephen Byron said that with more domestic and international flights leaving and arriving into Canberra daily, the Airport was constantly trying to improve the reliability of arrivals and departures.

“This runway and taxiway improvement will save time and enhance safety in low-visibility weather situations like Canberra’s winter time fog,” he said.

Canberra Airport is fog-bound about 12 to 16 days a year but an Airport spokesperson said there were only three to five ‘really bad’ days when fog lingered until after 10:30 am and even midday, with 30-40 flights affected at worst on some days, plus flow-on delays.

The project was the latest in Canberra Airport’s “A Minute Matters” initiative, which strives to move passengers quickly through the airport and on and off flights.

“We know guests will be comfortable in our terminal, but they also want to get to their destinations without cancellations or delays, and this is another way for us to show them we understand every minute matters,” Mr Byron said.

This will be a big help for the high number of cancelled flights.

only took them 20 years to figure it out

Are they doing anything about ice on the runways, as it gets to Minus 8 sometimes.

Ice isn’t a problem though is it ? Black Ice in Canberra is more the exception than the rule.

Capital Retro - 22 minutes ago
"The cost of retrofitting was estimated to be about 17 per cent of the estimated capital cost." Gee, I didn't think rubber ba... View
chewy14 - 10 hours ago
Why does the "Public Transport Association of Canberra" get asked for commentary when they are a just a rebadged version of t... View
News 243

Yinan Zhang - 36 minutes ago
Thank you for referring to the appropriate information source Rosie, I like the way you have approached this delimma. Yes and... View
Nada Krstin - 10 hours ago
Redmond Herrington OK, since covid has been a GLOBAL pandemic and vaccines have been available and approved for at least 18 m... View
News 26

chewy14 - 43 minutes ago
JC, No spin here, just facts. Whatwik claims that others have had to backtrack on their plans. Except none of the other state... View
nadine - 12 hours ago
"Mr Barr said the ability to travel interstate ... would be entirely subject to border decisions made by other states" Given... View
Lifestyle 35

Ali McNally - 45 minutes ago
Nadine Pickersgill next year! View
Lyn Scougall - 10 hours ago
Margo Bellis it’s just the most beautiful garden. I think you told us about it and we went there 👍 View
Margo Bellis - 10 hours ago
Lyn....yes! View
Opinion 50

Futureproof - 1 hour ago
Why exactly, does the ACT, population smaller than the average LGA in Sydney, need this position? I can only guess that she w... View
Community 24

UPDATED 2:45 pm: An emotional Chief Minister Andrew Barr has defended the cautious approach of his government to handling the COVID-19...
News 26

@The_RiotACT @The_RiotACT
Misplaced for decades, the drawings and meticulous records of Goulburn #architect EC Manfred eventually saw the light thanks to the dedicated efforts of #volunteer historians, plus a little bit of luck https://t.co/Ga0Bn2B66D (1 hour ago)