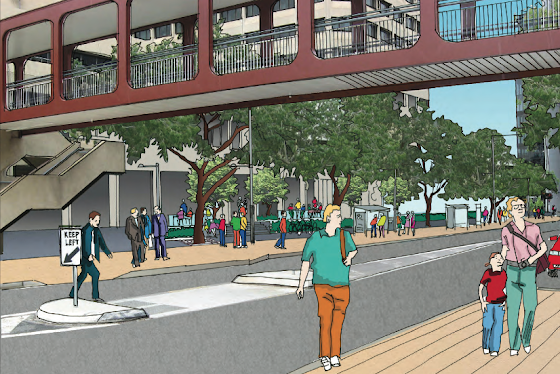 On Wednesday we drew attention to the Department of Land and Property Services building plans for 2011.

Many wags leapt upon the Alinga Street plans and questioned what the difference was between the artist’s depiction of the improvements (above) and the provided “before” shot. 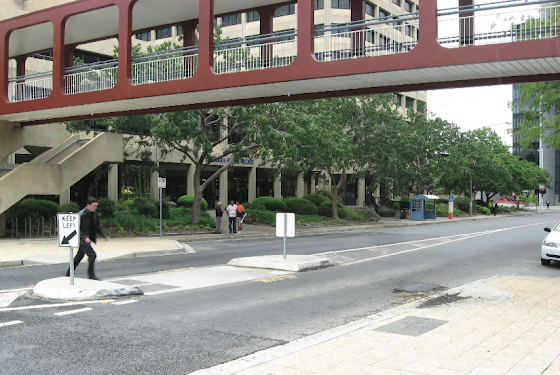 It’s even got the same dude crossing the road!

This morning the Chiefly Stanhope has explained to the dullards the subtle and yet important improvements.

A major $1.8 million upgrade to a busy section of Alinga Street in Canberra City will make it a much better place for pedestrians, cyclists and buses, Chief Minister Jon Stanhope said today.

“The stretch of Alinga Street, between Marcus Clark Street and West Row is a much-used area but is narrow, congested and unsuitable for the high level of pedestrian activity that now exists between the ANU student housing in City West and the retail area in City East,” Mr Stanhope said.

“This project will remodel the southern side of Alinga Street, providing clear pavement for pedestrians, bike racks, seats and bus shelters.

“By the time of its scheduled finish in August, it will complete an important pedestrian link between City West and the City Interchange and retail precinct.”

So we can all relax.

Tch. Seriously – what’s the matter with you people?

Can’t you see the different colour of the footpath between the drawing and the photo? That’s at least $1.8M worth of footpath paint!

Typical ACT Government, upgrading a footpath and completely ignoring the pedestrian and traffic arrangements of the intersection of Allinga and West Row/Moore St which is one of the most chaotic and dangerous intersections in the City.

There is 10+ near miss accidents at that intersection everyday and it comes to a 4 way stop during peak hours due to the uncontrolled layout and pedestrian crossings on the side roads. But replacing some footpaths is clearly more important than improving road safety.

The upgrade of footpaths at Rudd and Moore Sts is just as ridiculous, improving footpaths but not the intersection where there have been numerous accidents in the past year due to the poor visibility from Rudd into Moore St. The diagrams indicate that the proposed upgrade will make it a bigger danger by planting trees close to the roadside.

Typical of Stanhope and his desire to just make things pretty instead of spending the money to make things safer.

Interesting that when the dud crossing was a piece of roadside art last year (pretending to be restoration work), they didn’t install any barriers to stop teenage wags from throwing rocks from it into the traffic below.

The old overpass to the old Belconnen bus depot did have this. Might be a reflection on the class of character in Civic… or a demonstration of how many people actually use the Civic overpass.

The bus shelters are being installed and paid for by ADHSEL. According to their website:

“Adshel is the leading provider of advertising-funded street furniture solutions in Australia and New Zealand.”

The cost is as high as it is because of the number of bureaucrats necessary to complete the job and the number of unimportant nobodies who need to be paid to sign paperwork to make it happen.

It actually looks like the existing bike racks (under the stairs) have just moved about 20 metres to the right.

Shame the artist didn’t depict the massive pothole as well.

I note how they meticulously copied the four real people from the picture, but then had to add about 30 more people to the scene, put funky coloured clothes on them all and insert a blue sky to make it seem more vibrant.

Is this really how much all this work costs? Can anyone explain why this work is so expensive?

The work is so expensive because it is an ACT Government contract. Expect a budget blowout and complete ignorance of whatever generous deadline is given… maybe factor in a bridge collapse and traffic gridlock for good measure.

Canberra has to be the only capital city where the timeframe for minor road/pavement infrastructure works can be measured in months instead of weeks.

Wider footpath, more shelter for bus users, bike racks (but not lockers), seems like a nice upgrade to me.

Costs are high, but nothing out of the norm. This is standard! In IT is the same. 🙂

It was going to cost me 7k to get some paving done in a small area, and that was just with a sand base not concrete.

It will look good though! haha.

Also in the future all our clothes will be brighter.

The woman and child on the right of the picture must be looking up at a flying car.

I can not for the life of me understand how this will cost $1.8 million. A new pavement, a new bike rack and a new bus stop?

And as for the Bunda Street improvements costing $4.6 million – didn’t they only put down some new pavers?

Is this really how much all this work costs? Can anyone explain why this work is so expensive?

Also in the future all our clothes will be brighter.

Colin Vivian - 32 minutes ago
Elroy Jones and if you look at the ACT audited financial statements you’ll find net financial liability, net debt, net oper... View
Elroy Jones - 3 hours ago
Ruth Brown that’s because they’re underground (where they should be!!) DA won’t get through this Gov without serious at... View
meomi - 9 hours ago
This is horrible! There are many water birds and insects nest in the plants along the lake, now all become concrete! The conc... View
News 1

Latoya Wedlake - 4 hours ago
Joel Davies this is prefect.. my birthday coming up soon 🙂... View
Natalie Murnane - 8 hours ago
The two golf courses next door aren't enough? View
Frank Murnane - 10 hours ago
Would need to clear the trees for a chipping green View
News 36

@The_RiotACT @The_RiotACT
Wondering about the best ways to talk to your young children about coronavirus? Here are some expert tips https://t.co/uv6q0PBSMi (55 minutes ago)