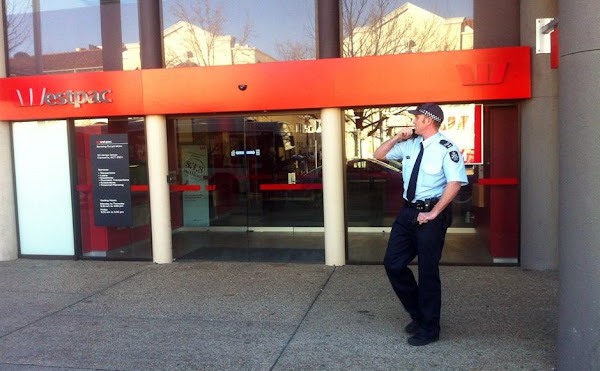 We’re getting multiple reports of some sort of armed holdup on Alinga Street in Civic.

More as it comes to hand. 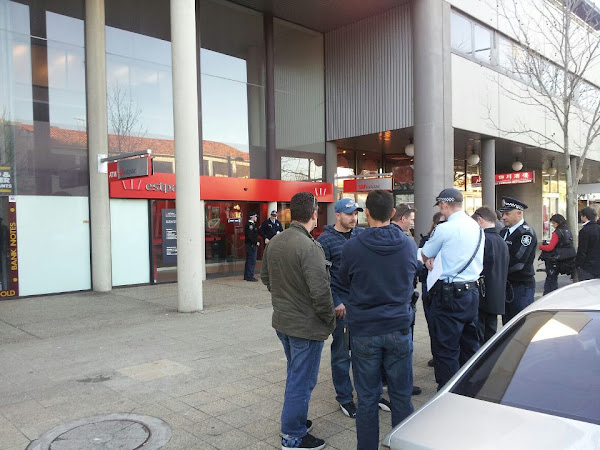 And another one from Neil. The police media unit is yet to reply to our email.

ACT Policing is investigating an aggravated robbery that occurred at the Westpac bank in Alinga Street, Canberra City today.

Around 3.00pm, a man entered the Westpac premises with what appeared to be a firearm and demanded money from the teller.

The teller handed over a sum of cash whereby the offender then left the premises.

The alleged offender is described as Caucasian in appearance, approximately 165cm (5’5”), wearing a hat, dark jacket and a scarf across his face.

ACT Policing is at the scene and are investigating the incident.

Anyone who may have seen a man fitting this description in the area is urged to contact Crime Stoppers on 1800 333 000, or via www.act.crimestoppers.com.au. Information can be provided anonymously.

Was Massey still out on bail?

Must have been wearing heels.

Police and Corrections staff from the courts are frequently in the Subway nearby, that would make a brave target at the best of times.

Police and Corrections staff from the courts are frequently in the Subway nearby, that would make a brave target at the best of times.

Waiting for The Greens to declare that this is all just a symptom of a society that uses currency as a medium of exchange for goods and services, and that really the offender should be given public housing and a bigger pension.

Haha, ABC radio saying Butch Cassidy made a getaway on his push bike and then dropped some of the cash while on the run.

CT reporting a man with a scarf across his face and armed with a firearm demanded money from a teller who complied before he fled.

“The alleged offender is Caucasian in appearance, about 165cm tall and was wearing a hat, dark jacket and a scarf across his face.”

Nice to see the security screens are working. Also nice to see the thugs have so little faith in ACT Police they’ll do over a bank less than 5min walk from City Police Station.

Which means it has concluded peacefully without fatality or injury…?

Otherwise I’m assuming ambulance would be there as well.

Forensics & Detectives are also hanging around the back of the Saraton Building. May or may not be related.

Time to break out the Bearcat… assuming they can get it through CIvic between all the public art works.

Turnball Yarry - 2 hours ago
Rusty Mash Micro-forest!... View
Ashley Keaveney - 2 hours ago
How about fix and maintain them. Dry land oval is a complete cop-out...... View
Elspeth Shannon Rollason - 3 hours ago
The Florey oval which is in this picture needs to be an oval for the primary school. It needs to be fixed up so the kids can... View
News 17