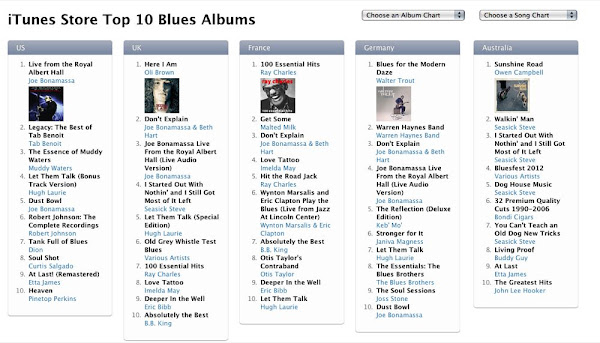 While I suspect Owen would have preferred to be making headlines by means other than brawling on air with talent show judges it has had a plus side.

His album Sunshine Road has gone to the top of the Australian Blues charts on iTunes.

We await with bated breathe his re-emergence on the show and can’t help noticing the stoush has been pretty good for the ratings of the show too.

The judges actually voted Owen off. They were over-ruled by a savvy senior producer not because of the story value , though it was a big bonus. But because the judges had made a error in booting him for not being to their liking. It would have damaged the show considerably. Notice the segment on Sunrise that gives mcfadden a chance to smooth his image over. Clever producer I thought.

Since he’s getting a second go on the show do you think maybe the whole thing was a publicity stunt by the producers?

That wouldn’t surprise me.

Saw the promo for the show – he is on again on Monday looking a little contrite. Hopefully he lets his singing talents show this time round.

Since he’s getting a second go on the show do you think maybe the whole thing was a publicity stunt by the producers? Or is that being too cynical?

Marea Fatseas - 42 seconds ago
Ashley Wright sorry, can you please explain how it makes sense to make Canberra a magnet for waste from interstate? View
Ashley Wright - 4 hours ago
Alex Troy Elsworth Adkins it makes sense to me too. But FYI the sidings have long been removed. The space is still there to p... View
David Riddell - 15 hours ago
Unless interstate waste is banned from Mugga the waste could still be accepted even should CRS facility becomes operational.... View
Opinion 14

Travis Harvey - 13 hours ago
Worth every penny. The stress on parents to try to educate their children at home whilst also trying to hold down their regul... View
Bianca Rossetti - 15 hours ago
To me schools opened too soon.. I would prefer to put health before wealth View
News 16

Canberrans will soon have another option to traverse the city with up to 1,500 dockless electric scooters being introduced under...
News 33