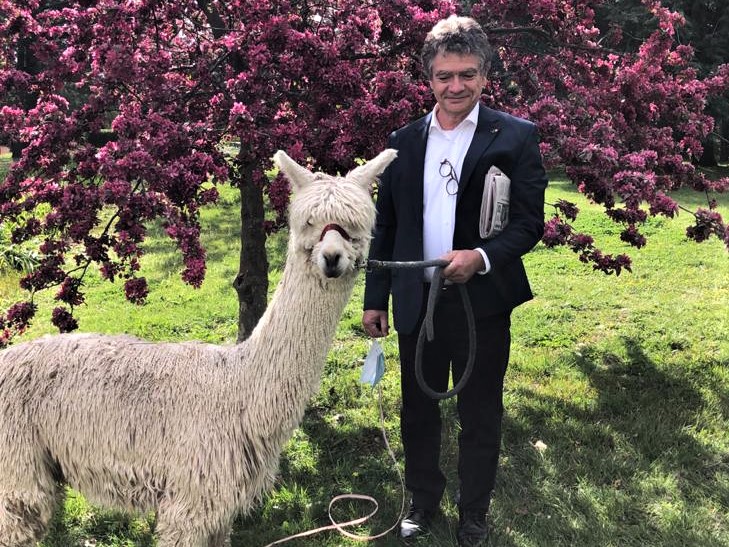 Meet Ambassador Michel Goffin and alpaca Boris (or is it Pablo?). Photo: Embassy of Belgium in Canberra.

A pair of alpacas has been brought into the Belgian Embassy in Canberra after foxes killed the ambassador’s beloved pet ducks.

Belgian Ambassador to Australia Michel Goffin has kept ducks since he was gifted a pair while stationed at the consulate in Laos in 2012.

He kept his duck flock going at his next assignment in the Philippines and when he moved to Australia’s capital in late June 2021.

“When I arrived in Canberra in the residence here, it was big land, three hectares of garden and forest, I thought, well I’m continuing with my duck farm hobby,” he says.

“There are a lot of foxes here in Canberra – my first batch of ducks were killed after three days.”

Losing his ducks to foxes hasn’t deterred the ambassador and he’s planning on getting more.

But this time, he wants to make sure they’re safe.

“I investigated a bit on the internet and we can do a lot of things to protect poultry … apparently the best idea is to have alpacas,” he says.

The alpacas Pablo and Boris (named for his hair, similar to United Kingdom Prime Minister Boris Johnson’s) are from Sensuri Alpacas in Braidwood, just outside the ACT.

“We thought that was a nice connection,” she says.

“They will coordinate their efforts to get rid of foxes.

“They will try and corner them in a fence if they can and they stamp them with their toenail and 60 kilograms of weight behind them.” 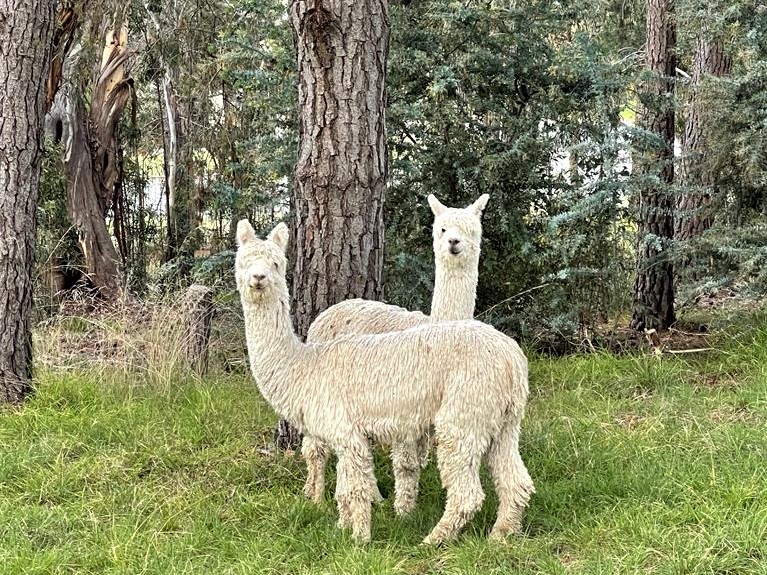 The wool of the alpacas will be used to make clothing. Photo: Embassy of Belgium in Canberra.

2021 marks the 60th anniversary of the Belgian embassy’s construction in Canberra.

The alpacas and ducks are a part of a wider sustainability and tourism project.

“The Belgian Embassy in Canberra is already one of the best spots for tourism; we see buses coming around a lot,” Mr Goffin says.

Pablo and Boris are proving popular among embassy staff too.

“They love them,” Mr Goffin says.

“They come on a regular basis to say hello… the chancellery office is in the same compound so you can see them very closely.”

There are plans to knit clothes from the alpaca wool.

The ambassador has also rescued the beehives on the grounds that were going to be removed.

“We are going to train our staff to take care of the bees, so we’ll also have honey production.”

Profits from the ‘.be hives’ honey will be 100 per cent donated to charity. 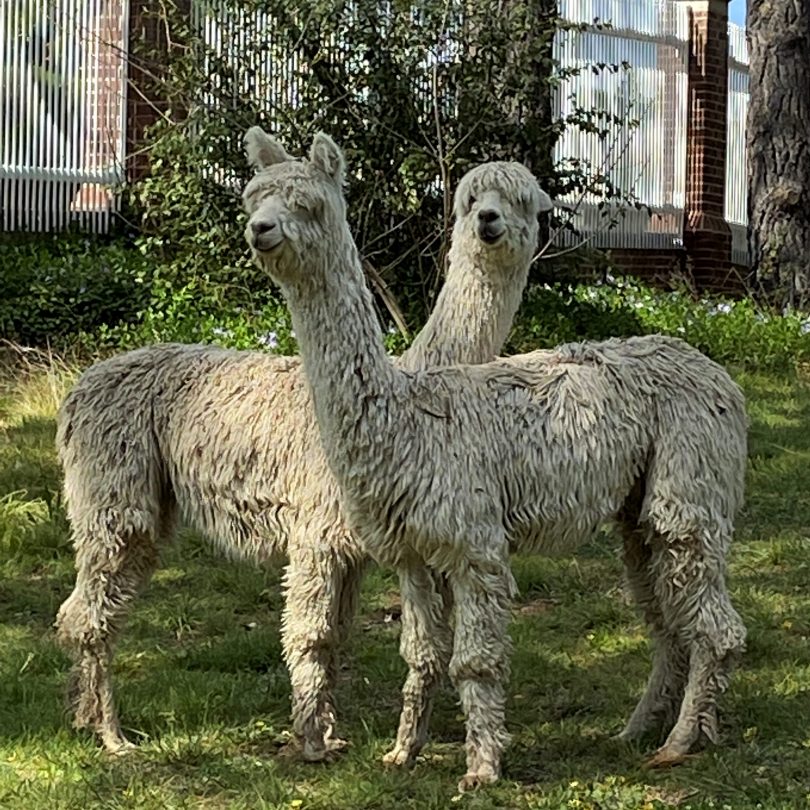 Pablo and Boris are taking well to the vast grounds of the embassy. Photo: Embassy of the Kingdom of Belgium in Canberra.

It’s not just alpacas, ducks and bees at the Belgian menagerie.

The ambassador has been encouraging wild sulphur-crested cockatoos to become regular visitors.

“They are absolutely magic,” he says.

“I’m buying 50 kilos a month of sunflower seeds. I have a big bird feeder and they are really enjoying the Belgian Embassy.”

Mr Goffin admits he’s a bit of a farming ambassador.

“Australia is a great country for animals and biodiversity, and we have a great property here, so I might as well use it in the right way,” he says.

The ongoing adventures of Pablo and Boris will be posted on the Belgian Embassy Facebook page.

Russian spies if I ever saw one.

Thomas Van Moer better call in for a pat mate

James, I love the namea

worth to visit your embassy Antoine Vansteenkiste

Feri Rahmat Chandra Piliang “Come pet our alpacas and also… want to try some waffles and visit us?”

Antoine Vansteenkiste where are chocolates? should I go to Switzerland instead LOL

Sarah Moss,maybe you need some alpacas 🦙

Suzanne Feeney. See. Alpacas is what you need. 😉

Tom Gilbert i’ve found a pet for us

Poor ducks…
There was a lovely little wallaby who resided at the Swedish embassy (around the corner from the Belgians) for several years, but he was killed either by dogs or foxes 🙁

Agree but they are cunning and will attack in broad daylight too. Alpacas instinctively chase foxes away. They are part of the solution.

Perhaps HE might think about taking some foxes back to Europe. Maybe all of them?

So, Mr Goffin will have the same problems there. Also, not a good idea to feed cockatoos exclusively a diet of sunflower seeds.

Other than that, good on him!

I was thinking the same 😂🤐

Costanza Maffi what is this fascinating attraction that cockatoos have for alpacas? 🤔

Dear Ambassador. Boris & Pablo will need an annual haircut. I can recommend Elkins Alpaca Shearing a Canberra based business.

Hi Colleen,
Yes they need shearing each year and are in good hands. Alpaca and Llama Shearing Braidwood NSW.

Good choice, Alpacas can be dangerous when threatened. 👍

Alpacas are dangerous to foxes but extremely easy care as a livestock option. Our herd of nearly 100 are easy to handle and wonderfully relaxing to be around.

Tina Mills just what we need 😅

Evelyne Sauvage some new residents at the Belgian Embassy in Canberra.

Why don’t you take the alpacas that nils is trying to rehome after retiring as therapy alpacas. I’m not sure if they have homes yet.

I love this story 💕