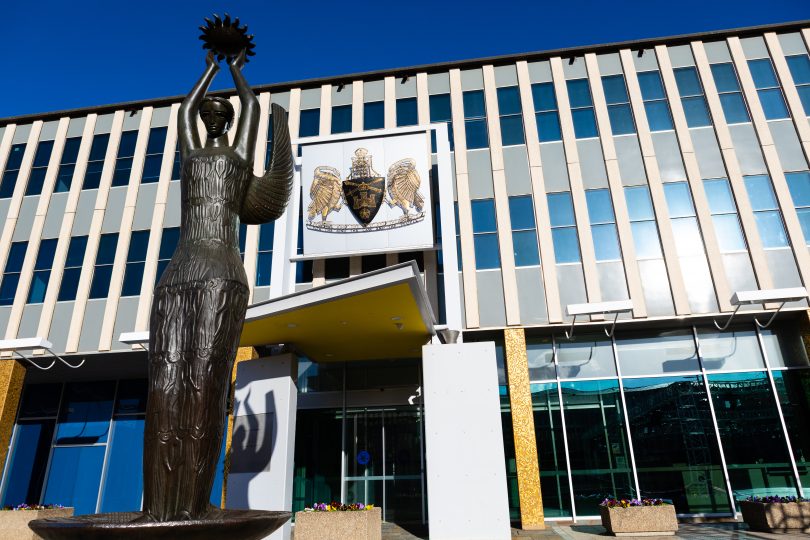 “We’re not here at the whim of a political party, we’re here to do a particular job, and we will do it without fear or favour,” says ACT Integrity Commission CEO John Hoitink. Photo: File.

It’s been a hectic start for the ACT’s new corruption fighters, with more than 40 matters referred since 1 December and the follow-up rate sitting well above the average of other jurisdictions.

ACT Integrity Commission CEO John Hoitink says that so far 12.5 per cent of referrals were at the preliminary investigation stage, compared with about 1-2 per cent elsewhere.

Mr Hoitink, a former Canberra policeman and an experienced corruption investigator, would not speculate on why this was the case, saying he has come to the job with an open mind and no expectations about where the Commission should or shouldn’t be.

But he admits it is a challenging time fielding referrals, which can come from multiple sources including the public, as well as building a team capable of doing the job the Commission was set up for.

With the Commission still filling slots in the team, Mr Hoitink has had to draw on contacts from interstate anti-corruption bodies to cast an eye over the referrals and decide which deserve to be looked at more closely.

”I am very fortunate that I can draw on the resources of the NSW ICAC, SA ICAC, IBAC and other integrity agencies who have assisted, so I’ve brought staff in from other agencies to assist us as we’re going through this build-up phase,” he said.

It is only a team of five at present, including Commissioner Dennis Cowdroy, Mr Hoitink, a temporary investigator and two admin staff, but the new Director of Investigations starts in a couple of weeks, and the Director of Legal and Director of Corruption Prevention Education appointments are also in train.

Mr Hoitink said the team would still need to grow to reach the ”critical mass required to undertake the functions and objectives within the Act”.

“I’ve put my budget submission in, the same as other agencies,” he said.

It was too early to paint a picture of the areas the referrals cover but Mr Hoitink said that in a robust economy like the ACT’s it would be naive to believe corruption would not exist.

“When you look at that much money washing around a system, you have to say there are opportunities out there for people to feather their own nest,” he said.

While property is the obvious sector to point the finger at, Mr Hoitink would only say that when he was working with ICAC in NSW there were agencies that had ”frequent flyer points”.

Despite the ACT being a much smaller jurisdiction, he expects that things that have occurred elsewhere would exist in Canberra.

Of the matters that have progressed to the preliminary investigation stage, only one is historical and Mr Hoitink made it clear that the Commission would not be making a habit of raking over old coals.

“If matters have been effectively dealt with by other mechanisms it’s not the role of this Commission to start delving into the past just because someone has an axe to grind,” he said.

”If matters have been effectively dealt with in the past we’re not going to expend resources going back looking at something if it’s been effectively resourced. If someone might be unhappy with a particular outcome, that’s not what the Commission is here for.”

Mr Hoitink stressed the Commission was focused on matters of substance and acknowledged that some will be unhappy with certain decisions.

“Just because there’s a lack of transparency doesn’t automatically mean there is corruption – there might be maladministration or other matters that have occurred,” he said.

But he pledged that if the Commission does suspect corruption and decides to investigate “we will certainly use everything in our powers to make sure either that it’s rooted out or it comes to a conclusion that could be either referred to another agency or referred to a prosecution body”.

But don’t expect to hear about those investigations until they become public examinations, unless the referrer goes public when a matter is dismissed, which is likely the case with the Manuka tree issue canvassed in another publication. If a referral is taken further, the Commission will issue a confidentiality notice.

“We carry out investigations to a stage we consider the matters under our legislation [can be] referred to other agencies, dismissed or investigated. There is no particular timeline because some are more complex and some require more digging than others,” Mr Hoitink said

With the ACT being a human rights jurisdiction, the Commission is very aware of using its strong powers of coercion and surveillance discretely.

“You’re impinging on someone’s human rights when you are doing those things. It’s certainly not a decision taken lightly,” Mr Hoitink said. “We obviously consider whether there is any other way to get that information.”

He is also keen to avoid overlap with other agencies so he can deploy his resources to best effect.

He does not have a view on whether the police should be subject to the Commission, something the Commonwealth continues to oppose, but he says he’ll be unfazed if it remains the case.

While the Commission may be the creation of the Legislative Assembly, Mr Hoitink is quick to emphasise its independence.

“I don’t report directly to the Assembly, I report to the Commissioner,” he said. “We’re not here at the whim of a political party, we’re here to do a particular job, and we will do it without fear or favour.”

Shocking to imagine, our socialist paradise is any less than squeaky clean. Given the probable ten figures of pork that Dear Leader spent to purchase the last federal election, I guess anything’s possible.