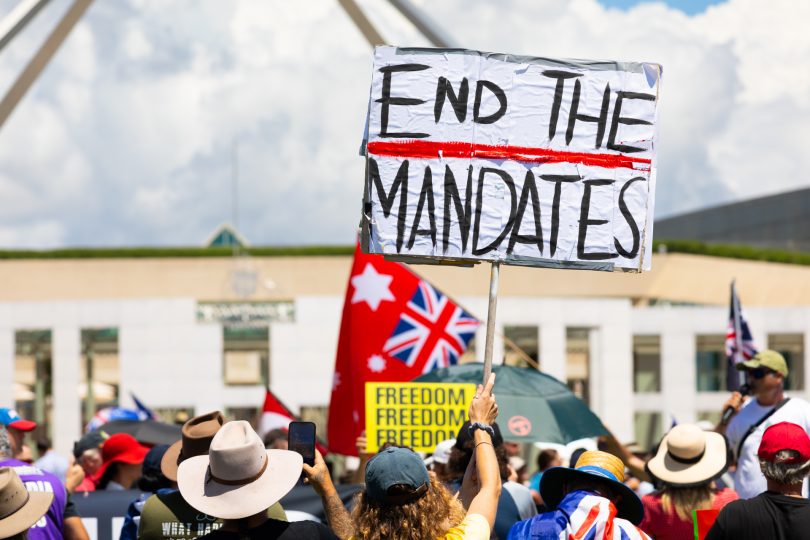 Hundreds of protestors have swarmed around the front of Parliament House in reaction to vaccine and mask mandates.

Trucks, cars and caravans began arriving at Reconciliation Place this morning from not only the ACT, but also NSW, Victoria, and Queensland before protestors began moving towards Parliament House this afternoon.

A line of police is preventing the protestors from gaining access. 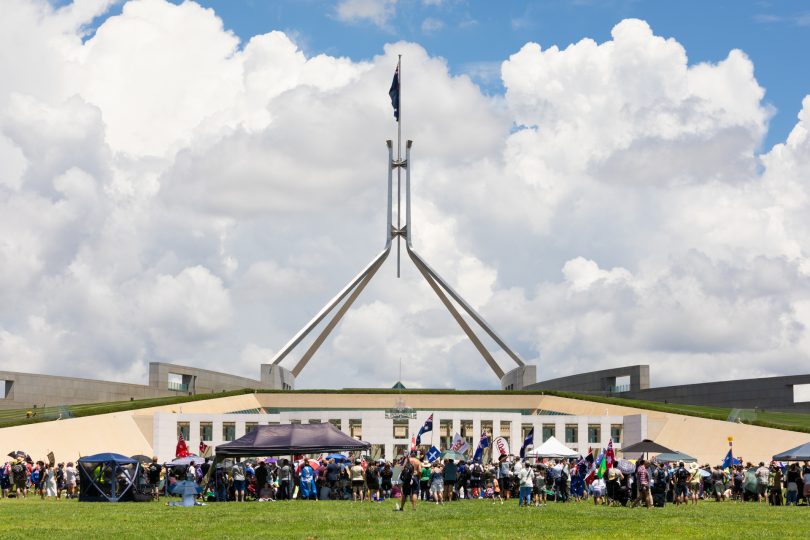 The group is made up of various factions, including those promoting Aboriginal sovereignty. Photo: Michelle Kroll.

UPDATED 5:40 pm: The ‘Convoy to Canberra’ is inspired by similar action currently taking place in Canada, and protestors say they will stay in position until mandates are lifted.

Other factions are promoting Aboriginal sovereignty.

It’s understood the recent stormy weather had little effect on the protests. 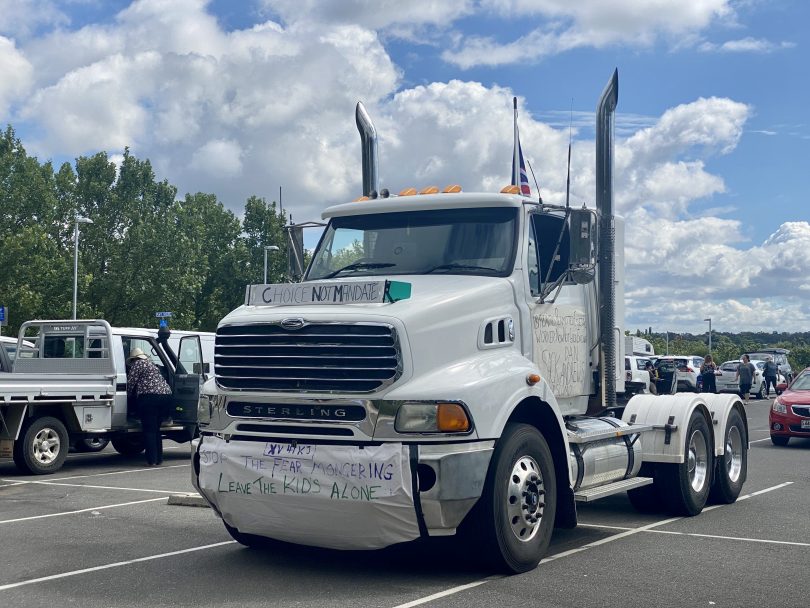 UPDATED 12:00 pm: Police are expecting traffic delays today (31 January) as a convoy of cars and trucks gather near Reconciliation Place to protest against vaccine and mask mandates.

There were some traffic delays this morning as vehicles entered the ACT via the Federal, Barton and Monaro highways.

“Further disruption may occur on Northbourne and Commonwealth Avenue later as vehicles move through the city towards Parliament House,” an ACT Policing spokesperson said

The protest will be monitored by police and some impact on local traffic may occur. Drivers are asked to avoid the area if possible.

Protestors told Region Media they plan to camp on site until the mandates are lifted.

Good on the protesters for standing up for human rights. The Federal government has breached many of its obligations under international law and should be held accountable. The government should get rid of the vaccination mandates.

The mandates are ruining people’s lives and doing horrific damage to people (financial ruin, suicides, thousands of people being sacked from jobs, businesses closing, families being destroyed etc.) much more than any virus is.

That’s a misleading headline – those people are not anti-vaccine, they just anti-mandate and anti-coercion. I’d expect better from you James!

There is nothing wrong about people demonstrating in Canberra against abuses of power and the removal of civil liberties, wherever that is occuring, here, states or overseas. The real threats to democracy are always those who implement violations and those who plaintively whinge and moan about others taking action to protest against these mandates and the crushing of dissent.

I get the slogans, Acton, but in the context of this protest what would you define as not “the crushing of dissent.” Please be specific.

There are certain basic freedoms of parliamentary democracy that we cherish in Australia. Freedom of speech, freedom of religion, freedom from fear, and freedom of association. When these freedoms are removed for any reason, for example by state government bans on demonstrations, police arrests and heavy handed tactics against organisers of peaceful protests, fines for not reporting a positive test result, border closures, school closures, lockdowns etc etc etc and the routine media ridiculing, if not suppression of dissenting views, then we should be cheering on all those with the guts to protest.

Which of those first supposed freedoms is not or never limited, whether by standing law or in particular circumstances? Freedom from all fear I cannot guarantee anyway.
The rest is special pleading which I suspect you may be less ready to extend to, say, Extinction Rebellion.
As I said in different words below, having dissent does not prove sense nor is it that all views must be acceptable. You need a satisfactory rationale.

Thank you for your support of Extinction Rebellion

Utter Morons. They were at one stage, demanding that someone come out to face the crowd. Little did they know, its a non-sitting week, there are no pollies here. I quite sure some of them actually think the pollies ‘live’ in Parliament ‘house’!

Why are you calling this an anti vaxx and anti mask protest? It was very clearly an anti mandate protest. Why try and spin this as something that it’s not?

Any particular mandates in mind, sv, or is this a protest against the existence of any mandate on anything at all?

The people who trashed Old Parliament House admitted they were inspired by the storming of the Capitol. Today’s idiot protestors carried Trump placards, and were also inspired by the truckers’ Ottawa protest. But Morrison is nothing if not a mini Trump, so you won’t hear a word of democratic concern from him.

Not sure i care to be informed by someone who listens to those that burn down an historic museum.
“Storming of the Capitol” when asked the FB chose not to answer if their offers were behind the attack…/ encouraged the attack/ were at the attack. Only a few protestors actually went into the capital.

In 2011 the night of skyfire a man got drunk and managed to fall into the ASIO building. Does this mean everyone attending skyfire attacked ASIO?

Decisions regarding health related restrictions, including QR codes, masks and most vaccination mandates are made by the
State & Territory Governments (or by private business operators), yet these protesters travel to Canberra, hold up our traffic and protest at the Parliament House?

These fools should be protesting at the ACT Assembly or in their own capital cities. The Federal Parliament’s only role in this is via convening the National Cabinet, but ultimately, the States make up their own rules, anyway.

They have stood up for a cause and you calling them fools? They are heroes!

Having, or passion for a cause do not confer either virtue or sense on it.

SFAIK, the Commonwealth has no constitutional authority (head of power) for health so perhaps we should just call them “exceptionally ill-informed”.

Don Quixote stood up for a cause too.

I saw them coming down Northborne Ave today. Looked like the usual anti (anything and everything) rent a crowd type rather than hero’s.

Correct, the Commonwealth has no constitutional authority over health.

I can’t see the point of being passionate for a cause, when you are protesting against the wrong Government. It just shows a lack of understanding by the organisers and everyone involved.

Ok, I accept your more generous definition of “exceptionally ill-informed”, but “heroes”, the definition used by Roo Poeta? I’m sorry, I don’t think so.

You appear to know a lot about protesters and demonstrators, JC.

Part of your job or just an enthusiast?

They do have the bully pulpit, and at the very least, the Feds could speak on the issue. If they wanted to go further, they also control the purse strings.

Feds speak to them? Parliament is in recess. There is no one there other than security guards, tourists and some public servants.

They are a collective of protesters, with no
one central issue. Vaccines, Masks, Aboriginal sovereignty, freeing the people from control of Government and so on.

Even if Parliament was sitting, no one from either major parties would speak to them, because it would be seen as legitimising their protest. There would be nothing to be gained.

Craig Kelly is probably the only person who would, because he’s campaigning on an anti everything platform.