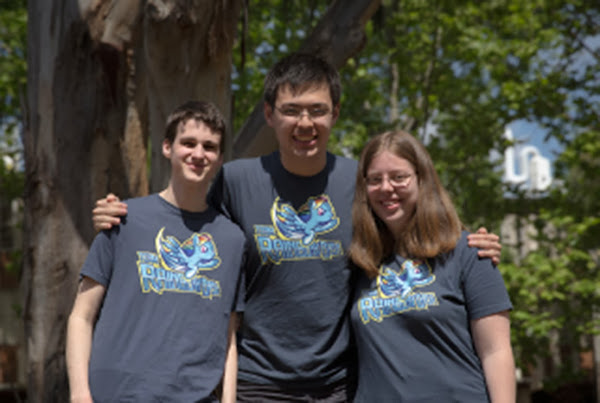 Several teams of ANU programmers have done quite well at the annual IEEEXtreme programming competition, which is awesome.

Special mention should go to team ’42’, not just for coming 5th but also for drawing inspiration from a much cooler franchise than their peers did.

Three ANU students have taken out first place at the annual IEEEXtreme programming competition, which sees students face off against each other amongst the world’s smartest problem solvers.

IEEEXtreme is a global competition which runs for a full 24 hours as teams of university students compete against each other to complete a series of programming problems. The more difficult the problems they complete, the higher the points they earn. IEEExtreme is held around the world at the same time, each year, on each participating campus.

Despite the challenges faced during the event, the students still had an enjoyable time.

“The challenge of solving algorithm problems quickly and efficiently, and the opportunities for teamwork made IEEEXtreme 2013 a very memorable event,” Franzi says.

“Tessa and Andrew were great teammates, and I hope to compete in a team with them again.

Fifth place was awarded to the team known as ‘42’ who placed 220th internationally. The team members were Wang Donglu, Grigori Ougrinovski and Miranda Zhang.

The teams were supervised by ANU Fellow Uwe Zimmer and Associate Professor Weifa Liang, who were both very proud of the way the teams conducted themselves over the 24 hours.

“It was a pleasure to see our student teams endure an international programming marathon with competence and elegance,” Zimmer says.

Congratulations to them, some fantastic talent!

I know Jon Franzi, he’s a very smart young bloke with a big future ahead of him.

Well done to them! Clever things.

And do they all look like Bill Gates before they start the course, or does that just happen?

Kelly Emblen - 9 minutes ago
Nada Krstin the one in Queanbeyan is for both View
Glenn Hayman - 11 minutes ago
Charles Godworth Liberal governments are well known for taking care of the vulnerable. Wait…... View
Nada Krstin - 54 minutes ago
Kelly Emblen wonderful. Hope a sleepbus has been established for men as well. View
News 2

Debbie Lizars - 57 minutes ago
Pete Macca the reason the fines are that high is because they are parks provided for people that cannot manage to mobilize wi... View
Perry Burns - 3 hours ago
We don’t learn much if we only listen to those who agree with us, so Perry and I want to thank everybody who cared enough a... View
Bill Gemmell - 3 hours ago
Perry Burns I will add that the stiffness of the penalty is designed to deter people from committing the offence. In your goo... View
Community 6

Natalie Gilbert - 1 hour ago
Leanne Heffernan that’s how I did my lambs. Although regretfully it took me a few days before I realised this was better th... View
Property 2

bigred - 3 hours ago
When is an investor not an investor? Ever heard of a "flipper"? These folk buy, do some basic upgrades, move in for 12 months... View
bj_ACT - 5 hours ago
“investors were not as active in Canberra as people believed“ this is a very good point. A number of Real Estate agents h... View
News 7

Nick Swain - 3 hours ago
All too late. Once Parliament (our elected rep[resentatives) approved the reno no consultations could stop it. View
MERC600 - 4 hours ago
Looks impressive. Should help in keeping it our major attraction. View
News 2

Samuel Gordon-Stewart - 3 hours ago
The idea that illegally or improperly obtained evidence is more likely to be accepted by a court if the officer involved can... View
Ujjoyinee Rahman - 4 hours ago
Won’t lack of oversight do the opposite? 🤔 View
Community 2

Jason Todd - 4 hours ago
Pretty sure the ACT greens promised a home for all at the last election. maybe someone needs to tell them View
ChrisinTurner - 6 hours ago
Ask the government where the hundreds of social housing apartments have been built to replace those demolished. View
News 1

nobody - 5 hours ago
The current Minister for Corrections is coping all the flack, while we forget all these issues at the AMC started under the p... View
Community 166

Tee Mannn - 6 hours ago
You all need to stop being emotional, and start applying some logic to this situation. It's not one law for one dog owner and... View
show more show less
*Results are based on activity within last 7 days

A Canberra homeless man has been left traumatised and unable to sleep after his dog was impounded by Domestic Animal...
Community 102

Everything we do in life is a risk. Right now, for me, the risk is that my mug of tea...
Community 17

Sleeping rough on Canberra's streets as the city shivers through sub-zero temperatures is bad enough, but those on the ground...
News 24

@The_RiotACT @The_RiotACT
It's illegal to sell vaping products to Canberrans under the age of 18, but an uptick in electronic smoking devices at schools has raised concerns among parents and prompted a review of the Territory's legislation https://t.co/soafRFOwFL (2 hours ago)

@The_RiotACT @The_RiotACT
ACT Policing has arrested two people in 48 hours for non-compliance with COVID-19 health directions. One is a woman who had allegedly refused to check in and the other is a man who allegedly travelled from Greater Sydney https://t.co/e8kFLZTCDa (3 hours ago)

@The_RiotACT @The_RiotACT
An agreement between Clubs ACT and the @PharmGuildAus could see flu vaccinations and health screenings delivered through community-based clubs in the ACT https://t.co/gJxJyEjxv8 (3 hours ago)