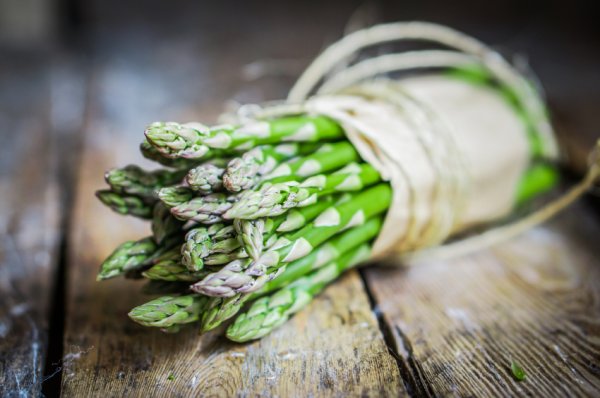 The first spears of asparagus have arrived at the Capital Region Farmers Market!!! I have been waiting not so patiently for their arrival for weeks. It turns out they arrived two weeks earlier than last year. When I know it’s spring, I just think… asparagus. But I must be more patient and give the shoots a chance to develop into fully fledged spears.

For me, asparagus is one of the hallmark ‘buy local’ vegetables. Many Australians love it as much as I do, which has encouraged the supermarkets to ship it in from the other side of the world in the off season. This is not good. It means a drastic increase to your carbon footprint. Besides, we love what we can’t have. Since deciding to only buy locally grown asparagus, I appreciate it so much more when I can have it.

Choose asparagus that is plum and firm. You don’t want lank and wrinkly spears. Sometimes the tips can get a bit slimy too, you don’t want that. I used to choose stalks that were thinner thinking they were superior to the thicker spears. But this isn’t true. It won’t matter how thick the spears are on good asparagus. Likewise, there shouldn’t be a need to ‘peel’ asparagus spears.

When you want to cook the asparagus, hold each end of the spear, then bend it till it snaps. It should naturally snap at the point where the base of the spear becomes woody. Sometimes I’ll have a munch on the top of that woody end, because I love asparagus that much. But what’s left of the spear should be crisp and enjoyable, not woody or stringy. This trick works best with the freshest asparagus.

Asparagus is great chargrilled, or on the barbeque with some thick juicy steaks. During the week I pan fried a beautiful piece of lamb backstrap. I added a few spears of asparagus to the pan, cut at an angle, to cook in the pan juices and served them up as a lovely spring dinner. Asparagus is delicious dunked into soft boiled eggs, perhaps with some toast soldiers too. My most impressive asparagus dish was a salad with smoked trout, potato and balls of goat cheese rolled in dill. It was delicious and very pretty.

4 Responses to Ape about asparagus
Filter
Showing only Website comments

i’m with proust on this one… apparently, about a third of people detect no effect.

my single favourite vegetable, also enjoyed by my young lads (without resort to tales of grossness)

Henry, that was Solid Gold!

I love asparagus, especially the low prices available now. It goes with almost anything (even my favourite takeaway, the Chiko roll).
Judging from the neglible comment on this thread one would think that all our readers live on is coffee and kebabs (peasants!).
The one problem is the after smell, in urine.
I think if food scientists could remove the thing in asparagus that creates this problem then farmers would sell a lot more.

Paul Morshead - 4 minutes ago
Graeme McLennan you finally made a “list” View
Troy Scott - 1 hour ago
I think I will boogs I was pretty good at it at 7 View
Steve Hugler - 4 hours ago
Troy Scott there’s still time for you to make a shot put comeback mate. 3 years and you could be at the Olympics!... View
Community 37

Coral Alexander - 15 minutes ago
Charlotte Ellen yuuus as if you could miss it. Paola Leon you in?... View
Caroline Le Couteur - 2 hours ago
Please don't release a heap of plastic rubbish. We have enough problems.... View
Tracy Parker - 3 hours ago
Perth do a duck derby every year where around 15000 are released, they re use them and collect them all at the end of the eve... View
Sport 19

Dave Horsley - 17 minutes ago
How would a club like Penrith convince quality players to travel 6+ hours every week plus training when they could just join... View
Sione Nonehh Taufui - 36 minutes ago
Sione Taufui ouaaa 😂😂😂 party party... View
News 238

Lucy Doan - 18 minutes ago
Pls plant trees like those in inner North or inner South, do not convert new suburbs into Belconnen-style please! View
Jarrad Job - 2 hours ago
Doug Hovi Have to replace all the trees they cut down to make room for all the solar farms in the future🤣... View
Robert Woodrow - 3 hours ago
Tahlia Bruce or possibly not .... View
Lifestyle 30

Notes from the Kitchen Garden: how to start a vegetable garden this spring